Although we'll talk more throughout this chapter about how these features are used in the cache manager, in this section we'll introduce you to the concepts behind these features.

Some operating systems rely on each individual file system to cache data, a practice that results either in duplicated caching and memory management code in the operating system or in limitations on the kinds of data that can be cached. In contrast, Windows 2000 offers a centralized caching facility that caches all externally stored data, whether on local hard disks, floppy disks, network file servers, or CD-ROMs. Any data can be cached, whether it's user data streams (the contents of a file and the ongoing read and write activity to that file) or file system metadata (such as directory and file headers). As you'll discover in this chapter, the method Windows 2000 uses to access the cache depends on the type of data being cached.

One unusual aspect of the Windows 2000 cache manager is that it never knows how much cached data is actually in physical memory. This statement might sound strange, since the purpose of a cache is to keep a subset of frequently accessed data in physical memory as a way to improve I/O performance. The reason the Windows 2000 cache manager doesn't know how much data is in physical memory is that it accesses data by mapping views of files into system virtual address spaces, using standard section objects (file mapping objects in Win32 terminology). (Section objects are the basic primitive of the memory manager and are explained in detail in Chapter 7.) As addresses in these mapped views are accessed, the memory manager pages in blocks that aren't in physical memory. And when memory demands dictate, the memory manager pages data out of the cache and back to the files that are open in (mapped into) the cache.

By caching on the basis of a virtual address space using mapped files, the cache manager avoids generating read or write I/O request packets (IRPs) to access the data for files it's caching. Instead, it simply copies data to or from the virtual addresses where the portion of the cached file is mapped and relies on the memory manager to fault in (or out) the data into (or out of) memory as needed. This process allows the memory manager to make global trade-offs on how much memory to give to the system cache versus to the user processes. (The cache manager also initiates I/O, such as lazy writing, which is described later in this chapter; however, it calls the memory manager to write the pages.) Also, as you'll learn in the next section, this design makes it possible for processes that open cached files to see the same data as do those processes mapping the same files into their user address spaces.

One important function of a cache manager is to ensure that any process accessing cached data will get the most recent version of that data. A problem can arise when one process opens a file (and hence the file is cached) while another process maps the file into its address space directly (using the Win32 MapViewOfFile function). This potential problem doesn't occur under Windows 2000 because both the cache manager and the user applications that map files into their address spaces use the same memory management file mapping services. Because the memory manager guarantees that it has only one representation of each unique mapped file (regardless of the number of section objects or mapped views), it maps all views of a file (even if they overlap) to a single set of pages in physical memory, as shown in Figure 11-1. (For more information on how the memory manager works with mapped files, see Chapter 7.) 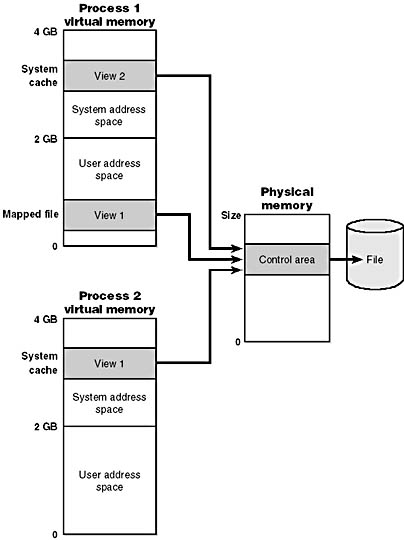 So, for example, if Process 1 has a view (View 1) of the file mapped into its user address space and Process 2 is accessing the same view via the system cache, Process 2 will see any changes that Process 1 makes as they're made, not as they're flushed. The memory manager won't flush all user-mapped pages—only those that it knows have been written to (because they have the modified bit set). Therefore, any process accessing a file under Windows 2000 always sees the most up-to-date version of that file, even if some processes have the file open through the I/O system and others have the file mapped into their address space using the Win32 file mapping functions.

Details of how intelligent read-ahead and fast I/O work are provided later in this chapter.

The Windows 2000 cache manager is also designed to do stream caching, as opposed to file caching. A stream is a sequence of bytes within a file. Some file systems, such as NTFS, allow a file to contain more than one stream; the cache manager accommodates such file systems by caching each stream independently. NTFS can exploit this feature by organizing its master file table (described in Chapter 12) into streams and by caching these streams as well. In fact, although the Windows 2000 cache manager might be said to cache files, it actually caches streams (all files have at least one stream of data) identified by both a filename and, if more than one stream exists in the file, a stream name.

Recoverable file systems such as NTFS are designed to reconstruct the disk volume structure after a system failure. This capability means that I/O operations in progress at the time of a system failure must be either entirely completed or entirely backed out from the disk when the system is restarted. Half-completed I/O operations can corrupt a disk volume and even render an entire volume inaccessible. To avoid this problem, a recoverable file system maintains a log file in which it records every update it intends to make to the file system structure (the file system's metadata) before it writes the change to the volume. If the system fails, interrupting volume modifications in progress, the recoverable file system uses information stored in the log to reissue the volume updates.

NOTE The term metadata applies only to changes in the file system structure: file and directory creation, renaming, and deletion.

To guarantee a successful volume recovery, every log file record documenting a volume update must be completely written to disk before the update itself is applied to the volume. Because disk writes are cached, the cache manager and the file system must work together to ensure that the following actions occur, in sequence:

When a file system writes data to the cache, it can supply a logical sequence number (LSN) that identifies the record in its log file, which corresponds to the cache update. The cache manager keeps track of these numbers, recording the lowest and highest LSNs (representing the oldest and newest log file records) associated with each page in the cache. In addition, data streams that are protected by transaction log records are marked as "no write" by NTFS so that the modified page writer won't inadvertently write out these pages before the corresponding log records are written. (When the modified page writer sees a page marked this way, it moves the page to a special list that the cache manager then flushes at the appropriate time, such as when lazy writer activity takes place.)