A new driver in Windows 2000, the Mount Manager (Mountmgr.sys), assigns drive letters for dynamic disk volumes and for basic disk volumes created after Windows 2000 is installed. Windows 2000 stores all drive-letter assignments under HKLM\SYSTEM\MountedDevices. If you look in the registry under that key, you'll see values with names such as \??\Volume{X} (where X is a GUID) and values such as ??\C:. Every volume has a volume name entry, but a volume doesn't necessarily have an assigned drive letter. Figure 10-12 shows the contents of an example Mount Manager registry key. Note that the MountedDevices key, like the Disk key in Windows NT 4, isn't included in a control set and so isn't protected by the last known good boot option. (See the section "Accepting the Boot and Last Known Good" in Chapter 5 for more information on control sets and the last known good boot option.) 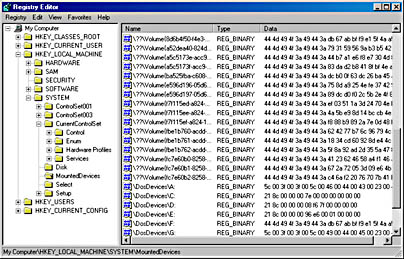 The data that the registry stores in values for basic disk volume drive letters and volume names is the Windows NT 4-style disk signature and the starting offset of the first partition associated with the volume. The data that the registry stores in values for dynamic disk volumes includes the volume's DMIO internal GUID. When the Mount Manager initializes during the boot process, it registers with the Windows 2000 Plug and Play subsystem so that it receives notification whenever either FtDisk or DMIO creates a volume. When the Mount Manager receives such a notification, it determines the new volume's GUID or disk signature and then asks either FtDisk or DMIO (whichever created the volume) for a suggested drive-letter assignment. FtDisk doesn't return suggestions (as it does during an upgrade from Windows NT 4 when it queries the Windows NT 4 HKLM\SYSTEM\Disk key), and DMIO looks at the drive-letter hint in the volume's database entry.

Mount points, a mechanism new to Windows 2000, let you link volumes through directories on NTFS volumes, which makes volumes with no drive-letter assignment accessible. For example, an NTFS directory that you've named C:\Projects could mount another volume (NTFS or FAT) that contains your project directories and files. If your project volume had a file you named CurrentProject\Description.txt, you could access the file through the path C:\Projects\CurrentProject\Description.txt. What makes mount points possible is reparse point technology. (Reparse points are discussed in more detail in Chapter 12.)

An example of a reparse point application is a Hierarchical Storage Management (HSM) system that uses reparse points to designate files that an administrator moves to offline tape storage. When a user tries to access an offline file, the HSM filter driver detects the reparse status code that NTFS returns, communicates with a user-mode service to retrieve the file from offline storage, deletes the reparse point from the file, and lets the file operation retry after the service retrieves the file. This is exactly how the Windows 2000 Remote Storage Services (RSS) filter driver, Rsfilter.sys, uses reparse points.

If the I/O manager receives a reparse status code from NTFS, and the file or directory for which NTFS returned the code isn't associated with one of a handful of built-in Windows 2000 reparse points, no filter driver claimed the reparse point. The I/O manager then returns an error to the object manager that propagates as a "file cannot be accessed by the system" error to the application making the file or directory access.

Mount points are reparse points that store a volume name ( \??\Volume{X}) as the reparse data. When you use the Disk Management MMC snap-in to assign or remove path assignments for volumes, you're creating mount points. You can also use the built-in command-line tool Mountvol.exe (\Winnt\System32\Mountvol.exe) to create and display mount points.

To create and view a mount point, perform the following steps:

Now you're ready to generate a recursive mount-point trace. Open a Command Prompt and execute the command dir /s I:\Recurse. If you look at all the file accesses that reference Recurse in the Filemon's trace of the subsequent file operations, you'll notice that the Command Prompt first accesses I:\Recurse, then I:\Recurse\Recurse, and so on, recursing deeper and deeper.

Filemon presents request types as their native IRP type, so a directory or file open appears as an IRP_MJ_CREATE request. A file or directory close is IRP_MJ_CLOSE, and a directory query is an IRP_MJ_DIRECTORY_CONTROL request with FileBothDirectoryInfo in Filemon's Other column. 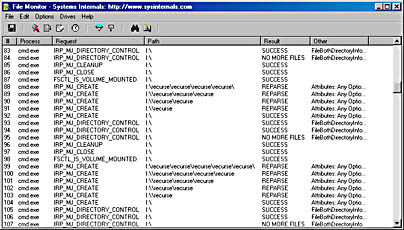 To prevent buffer overflows and infinite loops, both Command Prompt and Windows Explorer halt their recursion when the directory depth reaches 32 or the pathname exceeds 256 characters, whichever comes first.

For example, if the mount manager assigns drive letter D to the second partition on a system, it creates a \??\D: symbolic link that resolves to the device object \Device\HarddiskVolume2. A Win32 application that attempts to open the \Temp\Test.txt file on the D drive specifies the name D:\Temp\Test.txt, which the Win32 subsystem converts to \??\D:\Temp\Test.txt before invoking NtCreateFile, the kernel's file-open routine. NtCreateFile uses the object manager to parse the name, and the object manager encounters the \Device\HarddiskVolume2 device object with the path \Temp\Test.txt still unresolved. At that point, the I/O manager checks to see whether \Device\HarddiskVolume2's VPB references a file system. If it doesn't, the I/O manager asks each registered file system driver via a mount request whether the driver recognizes the format of the partition in question as the driver's own.

If your system has a dynamic disk, you can use the !drvobj driver object viewing command on the DMIO driver; otherwise, you need to specify the FtDisk driver. Here's an example:

The !devobj command shows the VPB field for the volume device object. (The device object shown is named HarddiskVolume6.) Now you're ready to execute the !vpb command:

The convention followed by file system drivers for recognizing volumes mounted with their format is to examine the volume's boot record, which is stored in the first sector of the volume. Boot records for Microsoft file systems contain a field that stores a file system format type. File system drivers usually examine this field, and if it indicates a format they manage, they look at other information stored in the boot record. This information usually includes a file system name field and enough data for the file system driver to locate critical metadata files on the volume. NTFS, for example, will recognize a volume only if the type field is NTFS, the name field is "NTFS," and the critical metadata files described by the boot record are consistent. 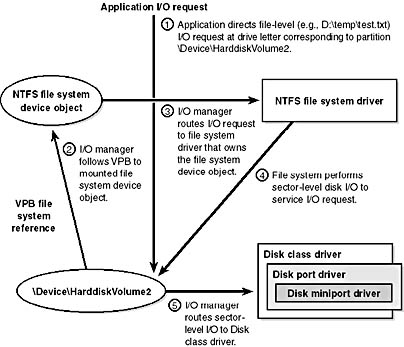 Aside from the boot volume, which a driver mounts while the kernel is initializing, file system drivers mount most volumes when the Chkdsk file system consistency-checking application runs during a boot sequence. The boot-time version of Chkdsk is a native application (as opposed to a Win32 application) named Autochk.exe (\Winnt\System32\Autochk.exe), and the Session Manager (\Winnt\System32\Smss.exe) runs it because it is specified as a boot-run program in the HKLM\SYSTEM\CurrentControlSet\Control\Session Manager\BootExecute value.

Chkdsk accesses each drive letter to see whether the volume associated with the letter requires a consistency check. One place in which mounting can occur more than once for the same disk is with removable media. Windows 2000 file system drivers respond to media changes by querying the disk's volume identifier. If they see the volume identifier change, the driver dismounts the disk and attempts to remount it.