The following types of multipartition volumes are available in Windows 2000:

A spanned volume is useful for consolidating small areas of free disk space into one larger volume or for creating a single, large volume out of two or more small disks. If the spanned volume has been formatted for NTFS, it can be extended to include additional free areas or additional disks without affecting the data already stored on the volume. This extensibility is one of the biggest benefits of describing all data on an NTFS volume as a file. NTFS can dynamically increase the size of a logical volume because the bitmap that records the allocation status of the volume is just another file—the bitmap file. The bitmap file can be extended to include any space added to the volume. Dynamically extending a FAT volume, on the other hand, would require the FAT itself to be extended, which would dislocate everything else on the disk.

A volume manager hides the physical configuration of disks from the file systems installed on Windows 2000. NTFS, for example, views volume D: in Figure 10-6 as an ordinary 100-MB volume. NTFS consults its bitmap to determine what space in the volume is free for allocation. It then calls the volume manager to read or write data beginning at a particular byte offset on the volume. The volume manager views the physical sectors in the spanned volume as numbered sequentially from the first free area on the first disk to the last free area on the last disk. It determines which physical sector on which disk corresponds to the supplied byte offset.

To a file system, this striped volume appears to be a single 450-MB volume, but a volume manager optimizes data storage and retrieval times on the striped volume by distributing the volume's data among the physical disks. The volume manager accesses the physical sectors of the disks as if they were numbered sequentially in stripes across the disks, as illustrated in Figure 10-8.

Because each stripe is a relatively narrow 64 KB (a value chosen to prevent individual reads and writes from accessing two disks), the data tends to be distributed evenly among the disks. Stripes thus increase the probability that multiple pending read and write operations will be bound for different disks. And because data on all three disks can be accessed simultaneously, latency time for disk I/O is often reduced, particularly on heavily loaded systems.

Mirrored volumes can aid in I/O throughput on heavily loaded systems. When I/O activity is high, the volume manager balances its read operations between the primary partition and the mirror partition (accounting for the number of unfinished I/O requests pending from each disk). Two read operations can proceed simultaneously and thus theoretically finish in half the time. When a file is modified, both partitions of the mirror set must be written, but disk writes are done asynchronously, so the performance of user-mode programs is generally not affected by the extra disk update.

Mirrored volumes are the only multipartition volume type supported for system and boot volumes. The reason for this is that the Windows 2000 boot code, including the MBR code and Ntldr, don't have the sophistication required to understand multipartition volumes—mirrored volumes are the exception because the boot code treats them as simple volumes, reading from the half of the mirror marked as the boot or system drive in the MS-DOS-style partition table. Because the boot code doesn't modify the disk, it can safely ignore the other half of the mirror.

Use the Disk Management MMC snap-in to create a mirrored volume. To do this, perform the following steps: 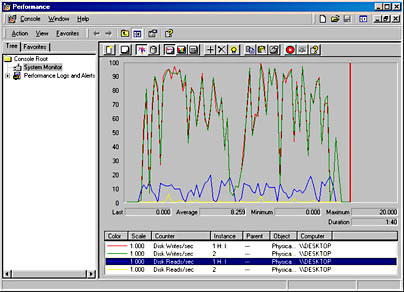 The top two lines, which overlap throughout the timeline, are the Disk Writes/Sec counters for each disk. The bottom two lines are the Disk Reads/Sec lines. The screen shot reveals that the volume manager (in this case DMIO) is writing the copied file data to both halves of the volume but primarily reading from only one. This read behavior occurs because the number of outstanding I/O operations during the copy didn't warrant that the volume manager perform more aggressive read-operation load balancing.

A RAID-5 volume is a fault tolerant variant of a regular striped volume. RAID5 volumes implement RAID level 5. They are also known as striped volume with parity because they are based on the striping approach taken by striped volumes. Fault tolerance is achieved by reserving the equivalent of one disk for storing parity for each stripe. Figure 10-10 is a visual representation of a RAID5 volume. 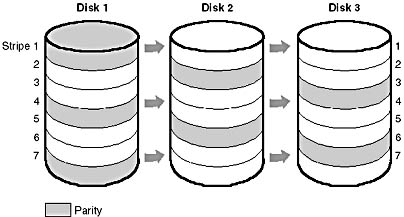 Recovering a failed disk in a RAID-5 volume relies on a simple arithmetic principle: in an equation with n variables, if you know the value of n - 1 of the variables, you can determine the value of the missing variable by subtraction. For example, in the equation x + y = z, where z represents the parity stripe, the volume manager computes z - y to determine the contents of x; to find y, it computes z - x. The volume manager uses similar logic to recover lost data. If a disk in a RAID-5 volume fails or if data on one disk becomes unreadable, the volume manager reconstructs the missing data by using the XOR operation (bitwise logical addition).

Whenever a file system driver or application sends an I/O request to a device object that represents a volume, the Windows 2000 I/O manager routes the request (which comes in an IRP—a self-contained package) to the volume manager that created the target device object. Thus, if an application wants to read the boot sector of the second volume on the system, it opens the device object \Device\HarddiskVolume2 and then sends the object a request to read 512 bytes starting at offset zero on the device. The I/O manager sends the application's request in the form of an IRP to the volume manager that owns the device object, notifying it that the IRP is directed at the HarddiskVolume2 device.

Because partitions are logical conveniences that Windows 2000 uses to represent contiguous areas on a physical disk, the volume manager must translate offsets that are relative to a partition to offsets that are relative to the beginning of a disk. If partition 2 begins 3449 sectors into the disk, the volume manager would adjust the IRP's parameters to designate an offset with that value before passing the request to the disk class driver. The disk class driver uses a miniport driver to carry out physical disk I/O and read requested data into an application buffer designated in the IRP.

Some examples of a volume manager's operations will help clarify its role when it handles requests aimed at multipartition volumes. If a striped volume consists of two partitions, partition 1 and partition 2, that are represented by the device object \Device\HarddiskDmVolumes\PhysicalDmVolumes\BlockVolume3 , as Figure 10-11 shows, and an administrator has assigned drive letter D to the stripe, the I/O manager defines the link \??\D: to reference \Device\HarddiskDmVolumes\ComputerNameDg0\Volume3, where ComputerName is the name of the computer. Recall from earlier that this link is also a symbolic link, and it points to the corresponding volume device object in the PhysicalDmVolumes directory (in this case, BlockVolume3). The DMIO device object intercepts file system disk I/O aimed at \Device\HarddiskDmVolumes\PhysicalDmVolumes\BlockVolume3, and the DMIO driver adjusts the request before passing it to the Disk class driver. The adjustment DMIO makes configures the request to refer to the correct offset of the request's target stripe on either partition 1 or partition 2. If the I/O spans both partitions of the volume, DMIO must issue two subsidiary I/O requests, one aimed at each disk. 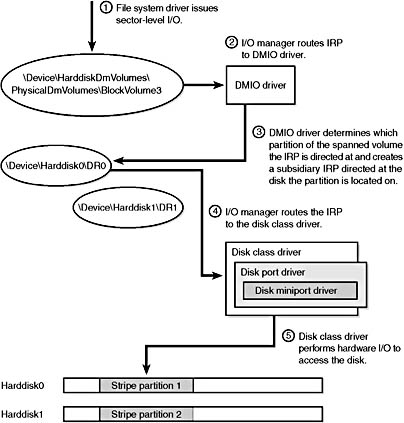 In the case of writes to a mirrored volume, DMIO splits each request so that each half of the mirror receives the write operation. For mirrored reads, DMIO performs a read from half of a mirror, relying on the other half when a read operation fails.