Is Windows 2000 a Microkernel-Based System?

Although some claim it as such, Windows 2000 isn't a microkernel-based operating system in the classic definition of microkernels, where the principal operating system components (such as the memory manager, process manager, and I/O manager) run as separate processes in their own private address spaces, layered on a primitive set of services the microkernel provides. For example, the Carnegie Mellon University Mach operating system, a contemporary example of a microkernel architecture, implements a minimal kernel that comprises thread scheduling, message passing, virtual memory, and device drivers. Everything else, including various APIs, file systems, and networking, runs in user mode. However, commercial implementations of the Mach microkernel operating system typically run at least all file system, networking, and memory management code in kernel mode. The reason is simple: the pure microkernel design is commercially impractical because it's too inefficient.

All these operating system components are, of course, fully protected from errant applications because applications don't have direct access to the code and data of the privileged part of the operating system (though they can quickly call other kernel services). This protection is one of the reasons that Windows 2000 has the reputation for being both robust and stable as an application server and as a workstation platform yet fast and nimble from the perspective of core operating system services, such as virtual memory management, file I/O, networking, and file and print sharing.

The kernel-mode components of Windows 2000 also embody basic object-oriented design principles. For example, they don't reach into one another's data structures to access information maintained by individual components. Instead, they use formal interfaces to pass parameters and access and/or modify data structures.

Despite its pervasive use of objects to represent shared system resources, Windows 2000 is not an object-oriented system in the strict sense. Most of the operating system code is written in C for portability and because C development tools are widely available. C doesn't directly support object-oriented constructs, such as dynamic binding of data types, polymorphic functions, or class inheritance. Therefore, the C-based implementation of objects in Windows 2000 borrows from, but doesn't depend on, features of particular object-oriented languages.

NOTE The next architecture to be supported by a future version of Windows 2000 is the new Intel Itanium processor family, the first implementation of the 64-bit architecture family being jointly developed by Intel and Hewlett-Packard, called IA-64 (for Intel Architecture 64). The 64-bit version of Windows will provide a much larger address space for both user processes and the system. Although this is a major enhancement that extends the scalability of the system significantly, to date, moving Windows 2000 to a 64-bit platform hasn't necessitated major changes in the kernel architecture of the system (other than the support in the memory manager, of course). For information on preparing applications now so that they can be ported to 64-bit Windows more easily later, see the section of the Platform SDK documentation entitled "Win64 Programming Preview" (also available online at msdn.microsoft.com). For general information on 64-bit Windows, search for the keyword "64-bit" on www.microsoft.com/windows. 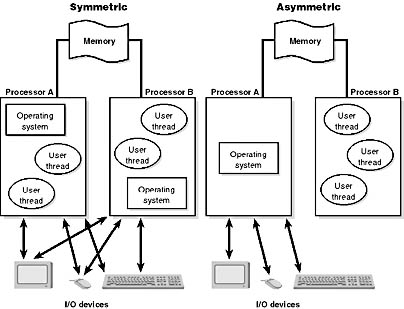 Although Windows NT was originally designed to support up to 32 processors, nothing inherent in the multiprocessor design limits the number of processors to 32—that number is simply an obvious and convenient limit because 32 processors can easily be represented as a bit mask using a native 32bit data type.

The actual number of supported processors depends on the edition of Windows 2000 being used. (The various editions of Windows 2000 are described in the next section.) This number is stored in the registry value HKLM\SYSTEM\CurrentControlSet\Control\Session\Manager\Licensed Processors. Keep in mind that tampering with that data is a violation of the software license and will likely result in a system crash upon rebooting because modifying the registry to allow use of more processors involves more than just changing this value.

In addition, Windows 2000 provides mechanisms (such as I/O completion ports—described in Chapter 9) that facilitate the efficient implementation of multithreaded server processes that can scale well on multiprocessor systems.