As described in Chapter 9, in the framework of the Windows 2000 I/O system, NTFS and other file systems are loadable device drivers that run in kernel mode. They are invoked indirectly by applications that use Win32 or other I/O APIs (such as POSIX). As Figure 12-11 shows, the Windows 2000 environment subsystems call Windows 2000 system services, which in turn locate the appropriate loaded drivers and call them. (For a description of system service dispatching, see the section "System Service Dispatching" in Chapter 3.) 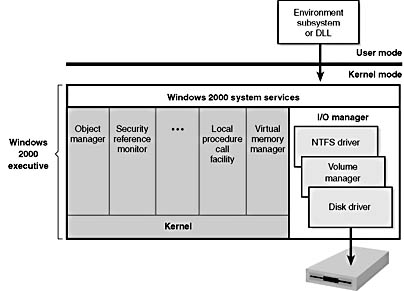 The layered drivers pass I/O requests to one another by calling the Windows 2000 executive's I/O manager. Relying on the I/O manager as an intermediary allows each driver to maintain independence so that it can be loaded or unloaded without affecting other drivers. In addition, the NTFS driver interacts with the three other Windows 2000 executive components, shown in the left side of Figure 12-12, that are closely related to file systems.

The log file service (LFS) is the part of NTFS that provides services for maintaining a log of disk writes. The log file LFS writes is used to recover an NTFS-formatted volume in the case of a system failure. (See the section "Log File Service (LFS)" for more information on LFS.) 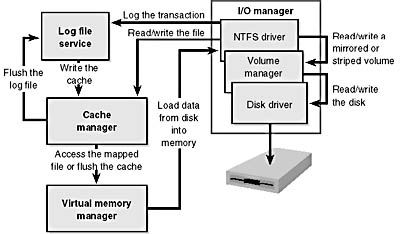 NTFS participates in the Windows 2000 object model by implementing files as objects. This implementation allows files to be shared and protected by the object manager, the component of Windows 2000 that manages all executive-level objects. (The object manager is described in the section "Object Manager" in Chapter 3.)

An application creates and accesses files just as it does other Windows 2000 objects: by means of object handles. By the time an I/O request reaches NTFS, the Windows 2000 object manager and security system have already verified that the calling process has the authority to access the file object in the way it is attempting to. The security system has compared the caller's access token to the entries in the access-control list for the file object. (See Chapter 8 for more information about access-control lists.) The I/O manager has also transformed the file handle into a pointer to a file object. NTFS uses the information in the file object to access the file on disk.

Figure 12-13 shows the data structures that link a file handle to the file system's on-disk structure. 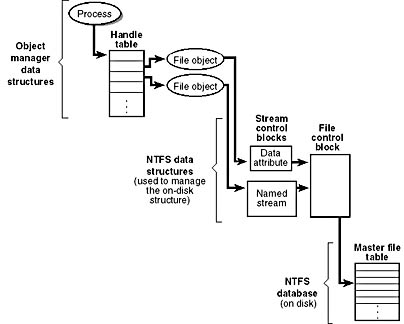 NTFS follows several pointers to get from the file object to the location of the file on disk. As Figure 12-13 shows, a file object, which represents a single call to the open-file system service, points to a stream control block (SCB) for the file attribute that the caller is trying to read or write. In Figure 12-13, a process has opened both the unnamed data attribute and a named stream (alternate data attribute) for the file. The SCBs represent individual file attributes and contain information about how to find specific attributes within a file. All the SCBs for a file point to a common data structure called a file control block (FCB). The FCB contains a pointer (actually, a file reference, explained in the section "File Reference Numbers" later in this chapter) to the file's record in the disk-based master file table (MFT), which is described in detail in the following section.