A Brief Overview of COM

A COM object encapsulates data and exposes public methods that applications can use to instruct the object to perform various tasks. COM objects are similar to the objects used by other OOP models, especially C++. However, COM differs in some important ways from conventional C++ programming.

The Contents of a COM Object

Figure 18-2 shows the relationship between a typical UMDF COM object-a UMDF device callback object-and its contents. The remainder of this section discusses the basic components of a COM object and how they work. 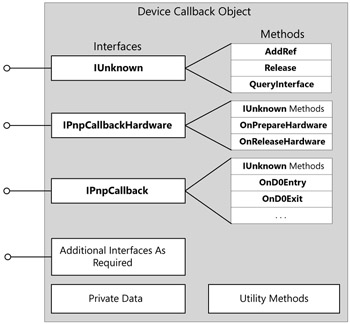 A typical COM object exposes at least two and sometimes many interfaces. An interface is the COM mechanism for exposing public methods on an object. With conventional OOP languages such as C++, clients use raw object pointers that provide access to every public method and data member that the object supports. With COM, objects group methods into interfaces and then expose the interfaces. A client must first obtain a pointer to the appropriate interface before it can use one of the methods. COM objects never directly expose data members.

An interface is effectively a declaration that specifies a group of methods, their syntax, and their general functionality. Any COM object that requires the functionality of an interface can implement the methods and expose the interface. Some interfaces are highly specialized and exposed only by a single object, whereas others are exposed by many different types of object. For example, every COM object must expose IUnknown, which is used to manage the object.

By convention, interface names begin with a capital letter I. All interfaces exposed by UMDF objects have names that begin with "IWDF". The conventional way to refer to a method in documentation is borrowed from C++ declaration syntax. For example, the CreateRequest method on the IWDFDevice interface is referred to as IWDFDevice::CreateRequest. However, the interface name is often omitted if confusion is unlikely.

COM has no standard naming conventions for objects. COM programming focuses on interfaces, not on the underlying objects, so object names are usually of secondary importance.

If an object exposes a standard interface, the object must implement every method in that interface. However, the details of how those methods are implemented can vary from object to object. For example, different objects can use different algorithms to implement a particular method. The only strict requirement is that the method has the correct syntax.

IUnknown is the key COM interface. Every COM object must expose this interface, and every interface implementation must inherit from it. IUnknown serves two essential purposes: it provides access to the object's interfaces and it manages the reference count that controls the object's lifetime. These tasks are handled by three methods:

Unlike C++ objects, a COM object's lifetime is not directly managed by its clients. Instead, a COM object maintains a reference count:

The next section provides some guidelines for using AddRef and Release to properly manage an object's reference count.

Guidelines for AddRef and Release

Follow these general guidelines for using AddRef and Release to correctly manage an object's lifetime.

If an interface pointer is passed as a parameter to a method, the correct approach depends on the type of parameter and whether the UMDF driver is using or implementing the method:

When a COM client makes a copy of an interface pointer, the client usually calls AddRef and then calls Release when it is finished with the pointer. Do not skip these calls unless you are absolutely certain that the lifetime of the original pointer will exceed that of the copy. For example:

When in doubt, call AddRef when you copy an interface pointer and call Release when you are finished with it. Doing so might have a minor impact on performance, but it's safer.

If you discover that the driver has reference counting problems, do not attempt to fix them by simply adding calls to AddRef or Release. Make sure that the driver is acquiring and releasing references according to the rules. Otherwise, you might find, for example, that the Release call that you added to solve a memory leak occasionally deletes the object prematurely and causes a crash.

To simplify using GUIDs, an associated header file usually defines friendly names that conventionally have a prefix of either IID_ or CLSID_ followed by the descriptive name. For example, the friendly name for the GUID that is associated with IDriverEntry is IID_IDriverEntry. For convenience, the UMDF documentation usually refers to interfaces by the name used in their implementation, such as IDriverEntry, rather than the IID.

All access to COM objects is through a virtual function table-commonly called a VTable-that defines the physical memory structure of the interface. The VTable is an array of pointers to the implementation of each of the methods that the interface exposes.

When a client gets a pointer to an interface, the interface is actually a pointer to the VTable pointer, which in turn points to the table of method pointers. For example, Figure 18-3 shows the memory structure of the VTable for IWDFIoRequest.

The VTable is exactly the memory structure that many C++ compilers create for a pure abstract base class. This is one of the main reasons that COM objects are normally implemented in C++, with interfaces declared as pure abstract base classes. You can then use C++ inheritance to implement the interface in your objects, and the compiler automatically creates the VTable for you.

COM methods often return a 32-bit type called an HRESULT. It's similar to the NTSTATUS type that kernel-mode driver routines use as a return value and is used in much the same way. Figure 18-4 shows the layout of an HRESULT.

The type has three fields:

As with NTSTATUS values, it's rarely necessary to parse the HRESULT and examine the fields. Standard HRESULT values are defined in header files and described on method reference pages. By convention, success codes are assigned names that begin with "S_" and failure codes with "E_". For example, S_OK is the standard HRESULT value for simple success.

It's important not to think of HRESULTs as error values. Methods often have multiple return values for success and for failure. S_OK is the usual return value for success, but methods sometimes return other success codes, such as S_FALSE. The Severity value is all that is needed to determine whether the method simply succeeded or failed.

Rather than parse the HRESULT to get the Severity value, COM provides two macros that work much like the NT_SUCCESS macro that is used to check NTSTATUS values for success or failure. For an HRESULT return value of hr:

You can examine the HRESULT's return code to determine whether a failure is actionable. Usually, you just compare the returned HRESULT to the list of possible return values on the method's reference page. However, be aware that those lists are often incomplete. They typically have only those HRESULTs that are specific to the method or standard HRESULTs that have some method-specific meaning. The method might also return other HRESULTs.

Always test for simple success or failure with the SUCCEEDED or FAILED macros, whether or not you test for specific HRESULT values. Otherwise, for example, if you test for success by comparing the HRESULT to S_OK and the method unexpectedly returns S_FALSE, your code will probably fail.

COM objects expose only methods; they do not expose properties or events. However, other mechanisms serve much the same purpose.

ATL is a set of template-based C++ classes that are often used to simplify the creation of COM objects. UMDF developers can use the ATL to simplify some aspects of driver implementation. However, ATL is not required for UMDF drivers and is not used in this book.

Info  See the Microsoft Press book Inside ATL and the ATL documentation in the MSDN library for more information about ATL-online at http://go.microsoft.com/fwlink/?LinkId=79772.

Interface definition language (IDL) files are a structured way to define interfaces and objects. IDL files are passed through an IDL compiler-the one from Microsoft is called MIDL-that produces, among other things, the header file that is used to compile the project. MIDL also produces components such as type libraries, which UMDF does not use. IDL files are not strictly necessary-a header file with the appropriate declarations is sufficient-but they provide a structured way to define interfaces and related data types.

The UMDF IDL file, Wudfddi.idl, contains entries for the interfaces that the runtime can expose or that UMDF drivers can implement. Wudfddi.idl contains type definitions for structures and enumerations that UMDF methods use and declarations for all of the UMDF interfaces. UMDF drivers typically do not need their own IDLs because they do not require type libraries and because the callback interfaces that they must implement are already declared in the UMDF IDL files.

It is often more convenient to get information about an object or interface from the IDL file rather than examine the corresponding header file. For an example, see Listing 18-1.

The interface header at the top of the example contains several attributes, such as:

The interface body is similar to the equivalent declaration in a C++ header file and includes the following:

Tip  See "The Interface Definition Language (IDL) File" on MSDN for more about how to interpret IDL files-online at http://go.microsoft.com/fwlink/?LinkId=80074.