This lesson introduces you to the Windows 2000 family of products, including their features and benefits. It explains the key administrative differences between these products and the environment for which each product is designed.

Windows 2000 is a multipurpose operating system with integrated support for client/server and peer-to-peer networks. It incorporates technologies that reduce the total cost of ownership and provides for scalability from a small network to a large enterprise network. Total cost of ownership (TCO) is the total amount of money and time associated with purchasing computer hardware and software and deploying, configuring, and maintaining the hardware and software. TCO includes hardware and software updates, training, maintenance and administration, and technical support. One other major factor in TCO is lost productivity. Lost productivity can occur because of user errors, hardware problems, or software upgrades and retraining.

This training kit focuses on the following two versions of the Windows 2000 operating system:

The following table describes the new features included in Windows 2000.

A Windows 2000 workgroup is a logical grouping of networked computers that share resources, such as files and printers. A workgroup is referred to as a peer-to-peer network because all computers in the workgroup can share resources as equals, or as peers, without a dedicated server. Each computer in the work-group, running either Windows 2000 Server or Windows 2000 Professional, maintains a local security database, as shown in the figure below. A local security database is a list of user accounts and resource security information for the computer on which it resides. Therefore, the administration of user accounts and resource security in a workgroup is decentralized. 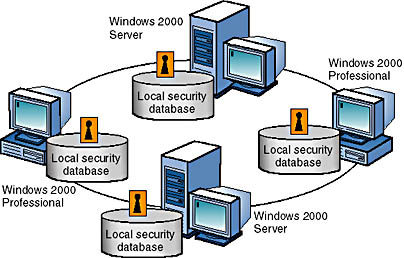 An example of a Windows 2000 workgroup

The following are disadvantages of using workgroup mode:

In a workgroup, a computer running Windows 2000 Server that is not a member of a Windows 2000 domain is called a stand-alone server. 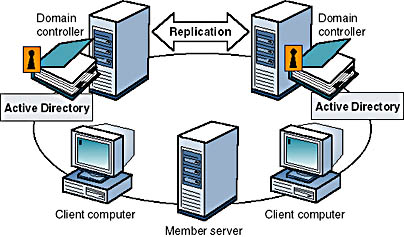 An example of a Windows 2000 domain

A domain does not refer to a single location or specific type of network configuration. The computers in a domain can share physical proximity on a small LAN or can be located in different corners of the world, communicating over any number of physical connections, including dial-up lines, Integrated Services Digital Network (ISDN) lines, fiber lines, Ethernet lines, token ring connections, frame relay connections, satellite connections, and leased lines. The benefits of a Windows 2000 domain are as follows:

A typical Windows 2000 domain will have the following types of computers: