After having given an overview of the standards for mobile video telephony, including CS/PS terminals and call control issues in 3GPP networks, in this section we will make some considerations for and remarks on performance. In particular error resilience, QoS profiles for conversational service, QoS metrics for video, video quality results for 3G-324M terminals, SIP signaling delay, and RTCP reporting capability aspects will be analyzed.

In mobile video telephony special attention must be paid to error resilience issues. Because an efficient system must operate with minimal end-to-end delays, often there is not enough time for media reparation, whenever media is hit by errors due to the lossy characteristics of the air interface. In most of the cases, forward error correction (or redundancy coding) is the only means to provide error resilience within the imposed delays. In addition, to reduce the impact of data corruption and packet losses on the received media, some special shrewdness also can be taken. Here we will focus on PS video telephony systems.

When encoding a video signal using the H.263 Profile 3, the achieved error resilience is higher than the baseline H.263. MPEG-4 visual offers also advanced tools for error resilience, such as data partitioning, RVLC (Reversible Variable Length Codes) and resynchronization markers. To guarantee low delay, the specification [56] recommends that the video packets must be no larger than 512 bytes. In general, the smaller the packets, the smaller the amount of video data lost (and the visual quality loss) in case of packet losses. On the other hand, too-small packets produce excessive RTP/UDP/IP header overhead. The choice of the right packet size is a trade-off between error resilience, delay, and bandwidth occupancy. The packet size also can be changed dynamically on the fly, based on the condition of the network link.

When encoding and packetizing speech data with AMR or AMR-WB, the specification [57] mandates (or forbids) the use of certain codec options:

For the transmission of real-time text using T.140, the use of redundancy coding is recommended to provide a better error resilience. [59]

In CS networks, errors in the air interface produce single bit errors in the video packet payload. A video decoder is generally resilient to bit error rates up to 10–3. In PS networks, errors in the air interface produce erroneous packets that generally are not forwarded to the higher protocol layers than IP. So, they are regarded as lost packets. In this case, SDU error ratios as indicated previously can be used to provide enough media resilience from packet losses.

Adequate techniques for objective and subjective speech and video quality assessment must be adopted to guarantee that a given mobile videophone implementation fulfills a minimum set of QoS requirements. This section focuses on video quality metrics.

When developing mobile video telephony applications the need is to decide which fundamental quality parameters should be selected as key parameters in QoS assessment of video. For this purpose both subjective and objective metrics must be used, because they can be considered complementary. You are referred to Curcio [61] for details about subjective metrics. Regarding objective quality metrics, standardization bodies have defined some methods. For example, the ANSI [62] and ITU [63] standards describe some metrics. However, for some of the metrics described in these documents, the implementation is not straightforward. Despite the effort of standardization bodies to define common video quality metrics, often the most-used objective method for video quality assessment is the PSNR (Peak Signal-to-Noise Ratio), because it is the easiest to apply to the metrics available. However, other useful quality metrics can be put to use when developing mobile videophone terminals. For further details on the metrics computation methods, please refer to Curcio. [64], [65]

The quality metrics are categorized into six classes, depending on the type of information they can provide:

To provide an idea of the performance of a videophone in mobile environment; we have implemented a PC version of 3G-324M terminal and made mobile-to-mobile calls between two 3G-324M PC terminals through a simulated circuit-switched WCDMA network at 64 kbps. Table 21.2 summarizes the main simulation parameters used in our tests.

The error patterns were injected two times into the bit stream to simulate the case of mobile-to-mobile connection, where two radio links are involved (this is the reason the bit error rates are doubled in Table 21.2).

The results obtained were measured in terms of average PSNR over 10 runs, standard deviation of PSNR, frame rate, delay, bandwidth usage, and visual quality. The reader interested in details about performance of 3G-324M terminals at different bit rates with service flexibility for WCDMA and HSCSD networks may refer to Curcio and coworkers, [66] Hourunranta and Curcio, [67] and Curcio and Hourunranta. [68] Average PSNR results are shown in Table 21.3.

The maximum quality loss achieved at the higher BER is below 0.5 dB, with a maximum standard deviation below 0.2 dB. The average encoding frame rate was 10.2 frames per second. The end-to-end delay from encoding to display (excluding capturing and network delay) was 140 ms, of which 98 ms was for shaping delay [69] and 42 ms was the processing delay. The bandwidth usage is reported in Table 21.4.

Finally, Figure 21.9 shows the average visual quality under the worst of the conditions tested (BER = 2*2E-04 at 3 kmph). The picture has been selected in a way that the PSNR of the sample picture is as close to the average PSNR as possible (31.65 dB). As it can be seen, the picture does not show critical degradations, and its quality is fairly good. 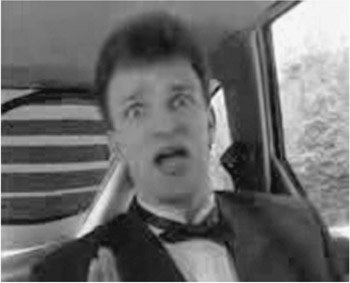 One factor that influences the overall user QoS, in addition to media quality, is the call setup delay. This is important when globally evaluating user satisfaction for a certain service. We take this issue into consideration in this section, evaluating the performance of a SIP user agent (UA) signaling with video telephony capabilities that we have implemented.

When SIP is used over UDP on a mobile network, the call setup time between two terminals can vary because of the following factors:

The message reliability system defined in SIP [70] is made in such way that it can cope with packet losses and unexpected delays within the network. The basic idea is that if a SIP message is not received within a certain specified time, it is retransmitted by the protocol itself. In the following, the retransmission rules for the different SIP messages exchanged in a session between two SIP UAs such as one in Figure 21.6 are explained:

In 3GPP Release 5 networks, the timers T1 and T2 are set to different and more-conservative values.

The tests we have run have been performed over a 3GPP Release '99 network emulator. The results will be expressed in terms of the following metrics:

Results of simulations are shown in Table 21.5. No signaling compression algorithms were used. For comparisons between calls over 3GPP Release '99 networks and calls in Intranet or WLAN environment, and for further details about SIP signaling delays, the reader can refer to Curcio and Lundan. [71], [72]

Table 21.6 contains results for SIP call set-up times in the case of restricted bandwidths. Also in this case, no signaling compression was used. Table 21.5 results assumed a bandwidth of 384 kbps; however, in many cases it is better to assume, as we did, that the bearer reserved for SIP signaling is a dedicated one, and of smaller size. Also, when running the tests with restricted bandwidth we have injected 2 percent packet losses using the NISTNET [73] simulator. The figures show that there is an increase in postdialing delays up to almost one second for network bandwidths as narrow as 2 kbps.

The results presented in this section are not related to SIP signaling within Release 5 of 3GPP specifications, where SIP is part of the call control in the IMS. In this case, the SIP signaling delays are estimated to be larger than those shown, due to the increased complexity of the whole network system.

The RTCP protocol basics have been introduced in Chapter 4, Section 4.5. We recall the fact the RTCP is used by a receiver to provide QoS information to the transmitting party in order to repair the media transmitted or, in general, to take some (possibly prompt) action to adjust or improve the QoS toward the receiver.

RTCP packets are normally sent with a minimum interval of 5 seconds. However, some applications may benefit from sending a more-frequent feedback. Video telephony can certainly benefit from a faster feedback, because this allows a faster reaction of the sender terminal to provide a better QoS to the receiving terminal. One possible action is to change on the fly the encoding parameters when the packet loss rate increases. This action should be taken as early as possible in the transmitting terminal, and a 5-second interval could be too long a time window to allow a fast reaction, especially if the media to repair is a speech stream.

The new RTP specifications [74], [75] define a more-flexible use of the RTCP data flow, allowing more-frequent feedback by reducing the transmission interval to a value lower than 5 seconds or by fixing the percentage of the RTP session bandwidth reserved for RTCP traffic.

The reader can see that the minimum bandwidth occupied by RTCP is below 0.2 kbps when a 5-second transmission interval is used. In this case the receiver sends only 12 QoS reports. When increasing the bandwidth reserved for RTCP, more-frequent feedback can be sent. For example, for speech traffic, a feedback message every 2.3 seconds would allow 26 QoS reports in one minute. In the same way for video traffic, a feedback message every 375 ms would allow 160 QoS reports in one minute. This would let the transmitting terminal have more possibilities to adjust the error resilience properties of the video stream. Theoretically, it could be possible to have 160 QoS reports for the speech stream as well. However, this would imply an RTCP bandwidth of about 2.4 kbps, i.e., over 13 percent of the RTP session bandwidth for speech. The reader interested in details about RTCP traffic can refer to Curcio and Lundan. [76], [77]