The Business Of Game Publishing

From a business perspective, designing a game is just one small part of the elaborate process of producing the game. And producing is also a smaller part of the lengthy process for publishing a title. Game publishing involves all the steps needed to get a game from the glimmer of a concept to a polished product that is distributed to the store shelves. This section explains the four key elements of publishing: development, licensing, marketing, and distribution. Game publishers are the primary source of funding in the game industry; so understanding these elements of how they work will help you interact with them more effectively. 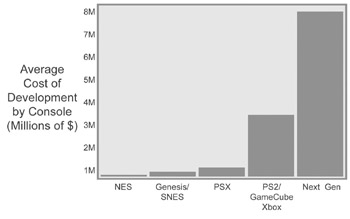 The basic task of development involves financing a team to create a title and then managing that process so that a high-quality game is delivered on time and within the budget.

The average cost of game development has risen steadily since the 1980s. Today, it typically costs $3.5 million to produce a console title, and that number continues to rise. The reason for the increase is simple: customers expect games to have more media of better quality to utilize the features of newer, better hardware systems. Back in the days of the Sega Genesis, for example, a game cartridge could hold 4 MB of data. Today, an Xbox DVD can hold 4.7 GB. That’s a 100,000% increase in capacity, and more capacity equates to greater customer expectations, and to more costly production of graphics, sound, music, gameplay, etc.

Steve Ackrich of Atari shared with us the diagram in Figure 15.5, showing the cost of console development over his time in the industry. Ackrich points out that the launch price for console titles over the same time period has remained steady at about $50. So with the cost of development for each title going up and the price of each title remaining static, game publishers have been forced to adopt a “fewer, bigger, better” strategy.

This means that publishers must produce fewer titles, because the costs are so high, and each title must sell more units. To do this, the production values must be better and the audience appeal broader. This dynamic leads to an extreme hits-driven business, where the top 20 game titles generate 80% of the industry’s revenues, while the other hundreds of titles make up the remaining 20%.

This is why, if you’re a designer, you may find it difficult to find a publisher for a truly amazing, original design that appeals to only a niche market. While everyone, publishers included, would like to see more diversity in the industry, the economics make this difficult to accomplish. Additionally, publishers don’t hesitate to cancel weaker products during the development cycle, saving their money and resources for games that promise to be stronger sellers.

A number of truly innovative independent game designers can be found working on the Internet today for this reason. Web games, often produced in Shockwave or Java, can be produced for far less money, and so present less of a risk in terms of innovative gameplay. Shockwave.com is a good place to see the work of some of these smaller developers and niche games.

Typically, publishers pay development costs to a developer as an advance against the royalties generated by the title. A royalty is a percentage of the overall revenue earned by a publisher that is paid to a project participant. Here’s a basic explanation how a standard publisher developer deal works:

These milestone payments are treated as an advance against future royalties. Typical royalty rates for a developer range from 10% to 18% of a publisher’s net sales revenue after deductions. The publisher starts paying royalties after the development costs have been recouped via sales. In our example, this means that the publisher keeps 100% of the revenues generated by a title until the royalties reach $3.5 million.

Royalties are calculated on “net sales revenue” or“adjusted gross income,” meaning the developer gets paid after the publisher makes deductions, such as: sales tax, duties, shipping, insurance, and returns. This can open the door for creative accounting. A developer is wise to ask that these deductions be narrowly defined and that the publisher not include its overhead costs.

In an affiliate label deal, the developer shares in development and marketing costs. This reduces the publisher’s risk, and thus the royalty percentages tend to be much higher—typically 65% to 75%.

First-time developers are a risk for the publisher, so their royalty rates are low. Established developers, who have proven that they can deliver hits, can negotiate for a higher rate because they represent less risk.

There are two basic kinds of licensing in which publishers engage: content licensing and console licensing.

As you saw in our list of the top publishers, many rely heavily on licensed properties for game title. Of the 103 titles EA released in fiscal year 2002, 51% were based on licensed properties. By licensing recognizable characters, personalities, music, or other entertainment properties and integrating them into a game, publishers can increase its exposure and sales, thereby decreasing their risk of investment. The following top-selling games are examples of games based on licenses: Tony Hawk Pro Skater 4, Harry Potter and the Chamber of Secrets, Enter the Matrix, Madden NFL 2004, The Lord of the Rings: The Two Towers, NBA Jam, Dark Angel, The Simpsons: Road Rage, and WWE Raw 2.

When a game uses a licensed property, the publisher pays the rights holder a fee for use of the property. So, in the case of the Madden NFL series, EA pays a license fee to John Madden and the NFL. With videogames pulling in record profits, licensors of content are holding out for higher and higher prices. Because of this, some publishers, like Sony Computer Entertainment and Microsoft Game Studios are actually quite aggressive about developing original game concepts, or intellectual property, as it’s called.

Nevertheless, it’s not uncommon for large titles to spend hundreds of thousands of dollars on a license, in addition to giving away anywhere from 1% to 10% of net revenues to the rights holder. The bottom line in terms of licensing is that it helps reduce publisher risk. Branded products have proven strong sellers time and time again, whether they have good gameplay elements or not.

When you produce a game on the PC, you don’t have to pay Microsoft, Apple, or the hardware manufacturer a royalty for distributing on their system. However, when a publisher distributes a game on a console system, they must enter into a strict licensing agreement with the console maker, in which they agree to pay a licensing royalty for every unit sold. Typically this ranges from $3 to $10 per unit—that’s on top of the retail markup, advertising, shipping, overhead, and development costs for the unit.

Here’s how the responsibilities for a typical third party console licensing deal breaks down.

Console licensing agreements generally give the console maker the right of final approval, which means that if they don’t approve of the game or its content they can prevent it from being released. The testing and approval process can be quite rigorous. The console maker wants to ensure that the game works under all conditions and that it meets their quality standards. If they find flaws that they deem significant, they can send the game back to the publisher and demand that it be fixed before release.

Changes at this stage of development, as we discussed in Chapter 13 can be very costly, and can also impact the release date, potentially missing important market schedules. If and when the publisher finally gains approval to release the game, they must pay the console maker the royalty fee for every unit manufactured up front. Only after this payment are the games delivered to the publisher and then redistributed to retailers.

A big part of the publishing task is marketing the game. A marketer’s job is to make decisions that will result in maximum sales. The marketing department is typically involved in a game’s entire life cycle, from conception through to the bargain bins. Only once the game is no longer saleable does the marketing team stop working. The marketing department handles everything from idea approvals and setting system specs through to buying up advertising on local radio stations, as well as coordinating in-store promotions and publicity. Marketing budgets are typically double the development budgets. So, for our example of a $3.5 million game, the marketing budget would come in at around $7 million.

Publishers have very important relationships with the wholesalers and retailers who comprise the distribution chain. Without these relationships, a publisher would not be able to sell enough products to pay back all the costs they incurred in the production of the game. Getting the game onto the shelves of large chains like Wal-Mart, Target, and Babbages is a must, and that process costs more money. Here is a breakdown of the costs involved in distributing a typical console game:

Even if a title is fortunate enough to be sold on the shelves of Wal-Mart, there’s no guarantee it will stay there for long. If the product doesn’t sell right away, or in sufficient quantity, retailers reserve the right to return product, which means that the publisher can wind up with a warehouse full of unsold games.

Even for larger publishers, who have a rich pipeline of games that the retailers desire, there are risks involved in producing games. The shelf life for most games is three to six months—not very long. And if you look at the publisher’s other expenses, including production budget overruns, high return rates, approvals being withheld, schedules slipping, etc., you’ll understand why so many of the smaller publishers go out of business or are bought by larger companies. It’s not easy to make a profit in the games industry unless you can control costs, produce the best products, and have the right relationships to make sure that your products get placed on the shelves and stay there.