As with most Microsoft Windows–based applications, there are several methods for opening the Visual Basic Editor. You can select Tools, Macro, Visual Basic Editor from the menu bar or press Alt+F11. If there is a specific macro that you want to edit or view, you can select Tools, Macro, Macros to bring up the Macro dialog box. From there, you can highlight the macro you want to work with and select the Edit button. You can also open the Macro dialog box by pressing Alt+F8.

When you open the Visual Basic Editor directly, you use the Project Explorer window to select the macro you want to work on. The Project Explorer presents all projects (groupings of code) and the macros they contain in a tree view that works the same as the tree view in Windows Explorer. The root object, or base object of the tree, is the current workbook that you are working in, along with any other workbooks and Add-Ins that might be open.

The main elements utilized by VBA projects are each stored in a separate folder within the project. Those elements include objects, which were introduced in Chapter 3; modules, which contain the macro code associated with a worksheet; class modules, which are definitions of user-defined objects you’ve created for your workbook (described in more detail in Chapter 14); and user forms, which are described in Chapter 19.

In the example shown in Figure 4-1, the current workbook is identified as VBAProject (DateTimeManipulations.xls). The three worksheets included in the workbook (Sheet1, Sheet2, Sheet3), along with the entire workbook (ThisWorkbook), are inside the Microsoft Office Excel Objects folder. Any macros programmed in VBA or recorded also appear in the Modules folder. Any class modules or user forms would appear in a Class Modules or a Forms folder, respectively. 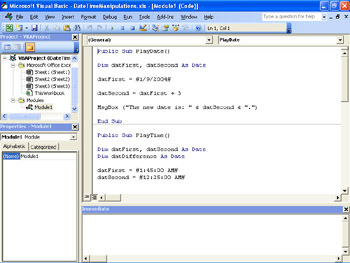 Figure 4-1: The Visual Basic Editor organizes your programming elements to make them easier to manage.

Directly below the Project Explorer window is the Properties window, which is used to examine and change the various properties associated with the selected object. For modules and worksheets, usually the Name property is the only one available, although worksheets do have additional properties that can be changed. Working with properties is most often done when working with user forms.

The Code window is the largest window within the Visual Basic Editor and is topped with two drop-down boxes, as shown in Figure 4-2. The drop-down box on the left, the Object box, is used to select an object to work on. When working with code only, the box will display the default General object. The second drop-down box, the Procedure box, is used to select individual macros within the current module. As macros are added and deleted from the module, they are also added and deleted from the Procedure box. 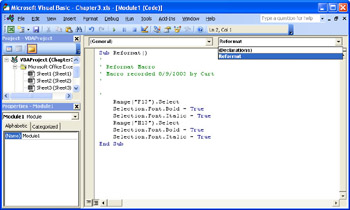 Figure 4-2: The Visual Basic Editor Code Window lets you pick objects and procedures to work on.

The Code window is replaced by the Form Editor when you click Insert, user form, as shown in Figure 4-3. 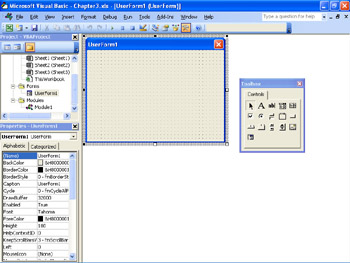 Figure 4-3: The Visual Basic Editor Form Editor takes over when you move from writing VBA code to creating user forms.

Just like every other Windows-based application, the Visual Basic Editor has a menu bar and tool bar providing access to many other features. Most of the menu options available on the File, Edit, Window, and Help menus reflect the same options available in other Windows- based applications. The rest of the menus, however, contain valuable capabilities that you’ll use frequently while working with the Visual Basic Editor.

The Insert menu lets you insert new procedures, modules, or user forms into your project. Table 4-2 summarizes the items available on the Insert menu in the Visual Basic Editor.

The Format menu contains commands to assist with the placement and formatting of objects on user forms. Table 4-3 lists the items available on the Format menu.

The Debug menu provides several tools to assist with debugging (testing) the execution of procedures. Table 4-4 lists the items available on the Debug menu.

The Run menu contains several commands that allow execution of program code and the display of user forms. Table 4-5 lists the items available on the Run menu.

The Tools menu gives you commands to run procedures, add references to external procedures, set options for the Visual Basic Editor, set properties for the current project, and digitally sign the project. Table 4-6 lists the items available on the Tools menu.

The Visual Basic Editor is fully customizable and can be configured to fit your own personal work style. The various windows can be undocked from their default positions and placed anywhere on the screen, including along a different edge of the window. Also, as discussed in Chapter 3, you can move, hide, and display any of the available toolbars, in addition to adding or removing toolbar buttons from any toolbar.

All of the ancillary windows within the Visual Basic Editor have a default docked location. To move a window, place the mouse pointer inside the title bar for the window and drag it to its desired location. An outline box will appear to show you where the window will be located when you release the mouse, as shown in Figure 4-4. 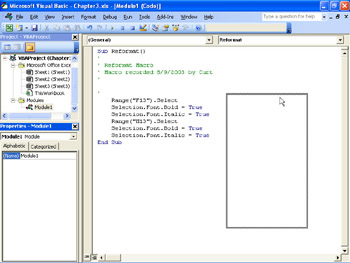 Figure 4-4: The default locations for the windows in the Visual Basic Editor appear here, but you can move the windows around to optimize your working environment.

The Editor tab, shown in Figure 4-5, is further divided into two sets of options. The first set, Code Settings, controls the display of IntelliSense tool tips, code formatting, variable declaration, and syntax errors. Auto Quick Info provides information on functions and their parameters as you type them, as well as applicable intrinsic constants during design mode. In run-time mode, Auto Data Tips provide the value of a variable when the mouse is hovered over it. Code formatting options include Auto Indent, which indents new lines to the same position as the line above it, and Tab Width, which sets the number of spaces one tab will occupy. Turning on the Require Variable Declaration option will prevent you from attempting to use a value in a variable you haven’t defined yet, and the Auto Syntax Check option will check each line of code for syntax errors as it is entered. Finally, selecting the Auto List Members check box causes the Visual Basic Editor to display information that could be used to complete a statement you’re typing. 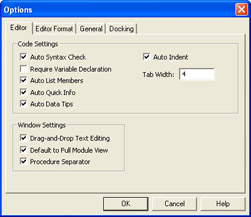 Figure 4-5: The Editor tab of the Options dialog box gives you the tools to change how code, errors, and tips are displayed in the Visual Basic Editor.

Inside OutAvoiding Errors Through Declarations

Requiring yourself to define a variable before you use it might be annoying, but it can prevent one of the most mysterious errors in programming: the divide by zero error. A simple case of attempting to divide by zero would be if you want to find the average temperature for a week. If you try to divide the sum of the temperatures by a new variable named intNumDays, to which you have not assigned a value, the program will assume the value is zero and generate the error.

The second set of options, Window Settings, controls how the Code window displays multiple procedures and determines how you may move code using the mouse. By enabling the Drag-and-Drop-Text option, you can drag and drop elements within the current code and from the Code window to and from the Immediate and/or Watch windows. Turning on the Default to Full Module View sets the view for new module windows to either a scrollable window or a single procedure view, while turning on the Procedure Separator option will draw a line separating procedures.

The controls on the Editor Format tab of the Options dialog box, shown in Figure 4-6, let you control the font style that is used to display code. From the color of different code elements (keywords, comments, syntax errors, selected elements, and so on) to the typeface and the size of the font, the code window can be customized to fit your particular needs. You can also turn the Margin Indicator Bar on and off, though you should probably leave it on because it provides a quick way to turn Break Points on and off. 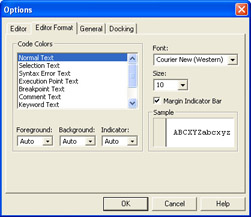 Figure 4-6: The Editor Format tab lets you determine everything from the font in which your code is displayed to the text color used to highlight important program elements.

The General tab, shown in Figure 4-7, provides options for Form Grid Settings, the display of ToolTips, the automatic closing of Form and Module windows, warning before variables are reset, error trapping, and determining when code is compiled. The Form Grid Settings allow you turn the grid dots on and off when designing user forms; you can also change the horizontal and vertical distance between grid dots and opt to have new controls aligned to the grid as they are added. You can also turn the ToolTips that help explain what each button on a toolbar does on and off. 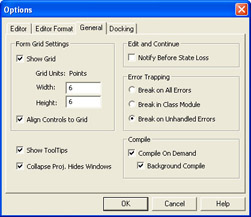 Figure 4-7: The General tab of the Options dialog box contains the controls that don't fit well into the other tab pages in the dialog box.

Selecting the Collapse Proj. Hides Windows option will automatically close module and user form windows when the project is collapsed in the Project Explorer window. Selecting the Notify Before State Loss option informs you when performing a specific action will reset all variables.

The last two options available on the General tab specify when the procedures are compiled. For fastest execution, both Compile on Demand and Background Compile should be selected. The first option allows faster application execution by compiling code on the fly rather than all at once, and the second determines if idle processing time is used to finish compiling the project during run-time mode.

The fourth and final tab available in the Options dialog lets you specify whether any of the ancillary windows within the Visual Basic Editor are dockable. By default, all windows are dockable with the exception of the Object Browser window.