At the core of all Managed C++ programs is the function. It is the source of all activity within a program. Functions also enable programmers to break their programs into manageable chunks. You have already been using a function called main(). Now let's see how you can go about creating a few of your own.

The general format of a function looks like this:

The function-name is obviously the name of the function. The rules of naming a function are the same as those for naming a variable.

The parameter-list is a comma-separated list of variable declarations that define the variable, which will be passed to the function when it starts executing. Parameter variables can be any value types, references, or pointers, even ones that are user defined.

Passing Arguments to a Function

You have two different ways of passing arguments to a function: by value and by reference. Syntactically, there is little difference between the two. In fact, the only difference is that passing by reference has an additional ampersand (&) placed before the value name:

The big difference is in how the actual values are passed. When passing by value, a copy of the variable is passed to the function. Because the argument is a copy, the function can't change the original passed argument value. For example, this function takes the value of parameter a and adds 5 to it:

There is a pro and a con to using references. The pro is that it is faster to pass arguments by reference, as there is no copy step involved. The con is that, unlike using pointers, other than &, there is no difference between passing by value or reference. This can make for the very real possibility of changes happening to argument variables within a function without the programmer knowing about them.

The speed benefit is something some programmers don't want to give up, but they still want to feel secure that calling a function will not change argument values. To solve this problem, it is possible to pass const reference values. When these are implemented, the compiler makes sure that nothing within the function will cause the value of the argument to change:

Returning Values From a Function

Returning a value from a function is a two-step process. First, specify the type of value the function will return, and second, using the return statement, pass a return value of that type:

You need to take care when you return a pointer from a function.

In traditional C++, the variable b in the preceding example would be a classic location for a memory leak, as the developer would have to remember to call the delete statement on the returned value b. This is not the case in Managed C++, because pointers to Int32 value types are garbage collected automatically when no longer used, thus delete need not be called.

You also need to take care when you return a reference from a function.

Something worth noting in this function is the creation of a reference using the new operator. Again, with traditional C++ you would have to delete the reference. Fortunately, because Int32 references such as pointers get garbage collected in Managed C++, there is no need for the delete statement and no memory leak occurs.

Another thing that you will probably return from a function is an array. In traditional C++, this would be handled by returning a pointer to the array. Unfortunately, this does not work for managed arrays, as managed arrays are not pointers. It is true that they are reference types, but there is no syntax for accessing arrays using the address of (&) operator. As this is the case, a new syntax for return arrays has been added for Managed C++:

To assign the return value to an array is simple enough:

Or you can do it in one statement, like this:

You can't use a function until after it has been defined. Okay, there is nothing stopping you from placing function declarations in every *.cpp file where it is used, but then you would have a lot of redundant code.

The correct approach is to create prototypes of your functions and place them within an include (.h) file, (I cover include files in Chapter 4.) This way, the compiler will have the definition it needs and the function implementation will be in only one place. A prototype is simply a function without its body followed by a semicolon:

In the dark ages of C, it was a common practice to have many functions with very similar names doing the same functionality for different data types. For example, you would see functions such as PrintInt (int x) to print an integer, PrintChar(char c) to print a character, PrintString(char *s) to print an array of characters, and so on. Having many names doing the same thing became quite a pain. Then along came C++, and now Managed C++, with an elegant solution to this annoyance: function overloading.

When a function overloaded call takes place, the version of the method to run is determined at compile time by matching the calling function's signature with those of the overloaded function. A function signature is simply a combination of the function name, number of parameters, and types of parameters. For function overloading, the return type is not significant when it comes to determining the correct method. In fact, it is not possible to overload functions by changing only the return type. When you do this, the compiler will give a bunch of errors, but only the one indicating that a function is duplicated is relevant.

There is nothing special about coding overloaded functions. For example, here is one function overloaded three times for the super-secret Test function:

Calling an overloaded function is nothing special either. Simply call the function you want with the correct parameters. For example, here is some code to call the third super-secret Test function:

The only thing that a Managed C++ programmer needs to concern herself with that a traditional C++ programmer doesn't is that built-in value types and their corresponding runtime __value types produce the same signature. Thus, these two functions are the same and will produce an error:

Passing Arguments to the main() Function

Basically, the main() function counts all the parameters passed to it, including the program that is being run, and places the count in the first argument, traditionally called argc. Next, it takes all the parameters and places them in a char or SByte array, each parameter being a separate element of the array. Finally, it passes a pointer to this array as the second argument, usually called argv.

Listing 2-15 is a little program that reads in all the parameters passed to it and then writes them out.

Figure 2-16 shows the results of this little program when passed the parameter "This is a test this is only a test". 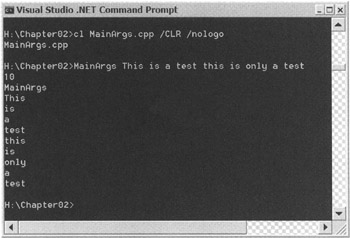