The CLR determines whether an application can access resources and perform certain actions based on the permissions granted to it and its callers. The .NET Framework uses Permission objects to represent three types of permissions:

Most of these permissions are organized within the System.Security.Permissions namespace. As you will see from the partial list in tables 9.3 and 9.4, the .NET Framework enables you to grant or examine permissions on a very granular level. For instance, you might wish to restrict your service from accessing environment settings or the system Registry, because if an attacker devised a way to exploit your service, you would not want them to be able to find out the details about your server that are exposed in those locations.

Knowledge of how permissions work is important for understanding how they are used to implement two of the three .NET platform security models, so next you will look at them in greater detail before learning more about the security models themselves.

Code-access permissions, which are part of the code access security model discussed later in this chapter, tend to focus on controlling access to specific system resources. They specify the types of actions that the code is permitted to perform. The CodeAccessPermission class is defined within the System.Security namespace. Each class derived from the CodeAccessPermission class has one or more public properties through which you can customize the behavior of that permission. For example, you can selectively allow access to areas of the file system, the Clipboard, and certain types of user interface windows, the default printer or all printers, and so forth. Table 9.3 lists some of the most common code access permission classes you might encounter as a .NET platform service developer.

Because it is useful for developers to be able to perform actions in standardized ways, the permission concept is also used to express information about the origin and identity of code. Table 9.4 lists common identity permissions, which are also found in the System.Security.Permissions namespace.

Most of these permissions should be self-explanatory. The ZoneIdentityPermission object’s possible values parallel the zones offered in Internet Explorer: Local Intranet, Trusted Sites, Internet, Restricted Sites, and Local Machine.

Let’s take a look at an analogy to show how this might work in everyday business. Suppose the chief executive officer of the company you work for places no restrictions on who can travel first class on business trips. However, the chief technical officer reporting to that CEO is carefully minding her budget and specifies that all staff in her area of the organization must travel coach or business class. She passes this policy down to employees who report directly to her, including the director of the application development group. Meanwhile, the project managers reporting to the director haven’t heard about the new policy yet and are still encouraging their staff to travel first class on long business trips. One day, you find yourself needing to travel to a client site to debug a challenging application configuration problem. You submit your first-class travel plans to your project manager, who approves them and passes them up the line to the director of application development. The director calls your manager to let him know that the request is being denied because of policy, and very soon your manager lets you know that the request was not approved. Unbeknownst to you, somewhere above you in the organizational hierarchy “stack,” the permission had been denied. This situation is illustrated in Figure 9.4. 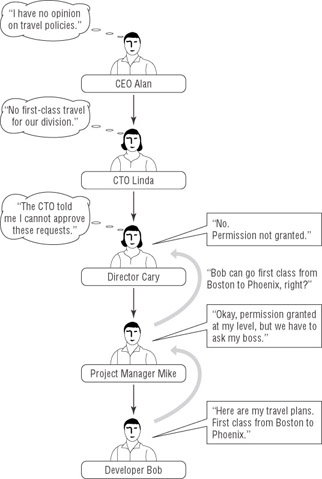 Now, relate this example to coding. Say you have an application that is granted all permissions by default, which calls a component that is explicitly denied permission to modify the value of the Path environment variable. That component might call a third-party component that in some cases tries to modify the Path's value, because it was written by a developer who did not anticipate it would ever be called by a method that did not want its Path's value modified. When the third-party component attempts to modify the value of the Path, a security exception is thrown, because the component does not have permission to do so. Figure 9.5 summarizes how this works. 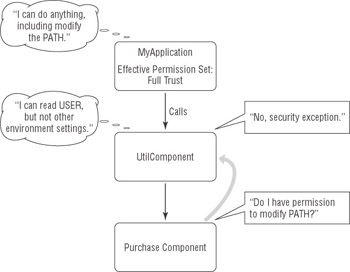 Why base effective permissions on those granted to callers as well as those granted to the currently executing method? Such a mechanism supports flexible configuration for modern, network-based components and reflects the notion that not all callers of a method are trusted equally. .NET handles permissions in this way so that the same code can run with different permissions depending on the caller. For example, a method might opt to write only to small areas of isolated storage if called from a process across the Internet, and write to other areas of the file system if called from a process on the local intranet, because it trusts the intentions of local callers more than it trusts those of random Internet users.

Now that you understand what permissions are and how .NET evaluates them to enforce security, next you’ll see how they are used in .NET applications.

.NET programmers can interact with permissions by using declarative (attribute-based) and imperative (traditional code-based) techniques. Why have two styles of working with security permissions? Attribute-based programming is convenient, enabling the developer to make use of a lot of .NET functionality without having to write additional lines of procedural code. Applying attributes to assemblies and methods also aids in documentation—the permissions required by that code are clearly noted. However, not all permission interaction can be accomplished via attributes (for example, choosing between two program behaviors based on the permissions currently in effect at runtime can be accomplished only imperatively), and not all programmers prefer notating their code with attributes to explicitly writing code to perform functions. Conversely, there are also some permission-related functions available via declarative notation that are not available in imperative code, so sometimes the attribute-based method of permission manipulation is required.

You are free to combine declarative and imperative methods of working with permissions, so that you can implement the desired functionality in the most convenient way. For example, you might want to use an attribute to declaratively demand permission for your assembly to read a file, but at runtime, use imperative method calls to restrict the writing of that file to users in the Administrator role. You’ll now look at what you can do with permissions, first through examples in the imperative style, then in the declarative style.

Because this is somewhat confusing, it is recommended that you not mix class and method permission attributes.

Methods Common to All Permission Objects

There are many ways in which .NET applications can interact with permissions. Table 9.6 lists methods available to all types of Permission objects.

It is good programming practice to specifically check for the permissions in code before they are needed. Using the Permission.Demand method, the programmer can verify that the currently executing code has the permission(s) to perform the anticipated functions and, if the code does not have the appropriate permission(s), to fail gracefully. The developer can even check which permissions are available and vary the code path, based on the current permissions. By varying the code path you are increasing the flexibility of your application with regards to the permissions that are required for the code to run. Another reason to use Demand is to verify that the required permissions for an action performed late in a method call are present before you perform resource-intensive setup code.

Listing 9.1 demonstrates the imperative use of the Demand method.

Listing 9.1: Imperative Use of the Permission.Demand Method

Now that you’ve seen how to implement Permission.Demand via imperative method calls, look at the declarative attribute-based technique in Listing 9.2. Notice that the name of the attribute is the permission name plus Attribute. The first argument is the Demand action, and the second is the permission property being verified.

Listing 9.2: Declarative Use of the Permission.Demand Method

The Intersect, IsSubsetOf, and Union methods all allow manipulation of Permission objects for additional flexibility, because some permissions are actually subsets or supersets of other permissions, and possession of one of the higher-level permissions implies possession of lower ones.

Code access Permission objects have additional methods, described in Table 9.7. These methods are used to alter the stack-walk behavior when the CLR is checking code access security permissions.

Some programmers, upon seeing the Assert method, might be tempted to confuse it with Demand. However, its functionality is different. Whereas Demand causes the system to walk up the call stack verifying that code has a certain permission, the Assert method states that the code is permitted to access the resource specified by the current permissions of the calling code, even if callers higher in the stack haven't directly been granted permission to access the resource, thus no stack walk is required.

To understand how this works in practice, let’s revisit our analogy regarding travel permissions. Suppose your project manager doesn’t want to bother the busy director by asking her to approve your request for first-class travel, and simply rubber-stamps it approved and hands it back to you. Your project manager has taken upon himself the responsibility that those reporting to him will use the permission to travel in first class responsibly (for example, by using it only when traveling on flights longer than three hours). In .NET Framework terms, he asserts that those below him in the hierarchy should be given this permission, regardless of the views or restrictions put in place by those above him. Figure 9.6 shows this in graphical form. 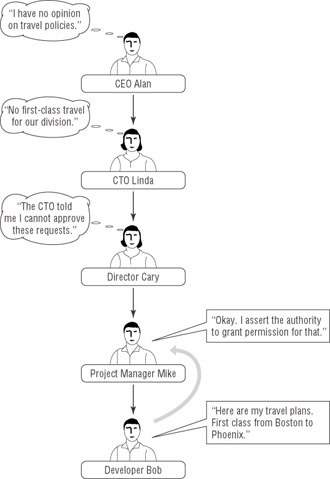 The use of Assert results in an increase in security vulnerability, in that you’ve just increased the chances that this code, when called from an untrusted process, can be used to do more than the programmer might have anticipated. Therefore, consider the implications carefully before using Assert in your code. Although both Assert and Demand will fail if the code in question doesn’t possess the specified permission, only Demand will fail if the code’s callers don’t possess the permission.

To assert a particular permission, you might use imperative code such as the following:

Alternatively, you could use declarative notation:

The Deny method performs a function similar to Assert, but in the other direction. Whereas Assert indicates that the indicated permission should be considered granted, Deny indicates that the specified permission should be considered disallowed. To go back to our travel example, the chief technical officer is issuing a real-world denial of first-class travel permission to those reporting to him when he sends out the policy memo. It can be useful to denyany permissions that are not absolutely required before calls to a third-party class library, to help ensure that any implementation flaws in that library don’t compromise the security of your code. To deny a permission imperatively, you would use code like the following:

And to deny declaratively, you would use code similar to this:

The Assert, Deny, and PermitOnly methods can be used to increase the efficiency of code because they reduce the amount of time spent performing stack walks when explicitly testing permissions with Demand or attempting to execute code requiring permissions. However, as previously mentioned, because they prevent the CLR from considering security-related evidence that might be provided by the code’s callers, they should be used with care.

To require permission to read drive C:, you could include an attribute such as the following within the assembly’s code:

To optionally request (but not require) Read access to drive C:, you could use the following attribute:

In addition, PermissionSet objects feature several other methods for manipulating collections of permissions, as listed Table 9.8.

Because some permissions might be required for only a short time, you can use RemovePermission to take a specific permission out of the permission set. For example, if you no longer needed permission to access the environment, you could use the following code to remove that permission:

You can also use SetPermission to replace an existing Permission object in the permission set, with a new one of the same type.