Series 60 applications use various queries to ask the user a question, which may determine how the application then proceeds. A response to a query may require the user to enter some data, select one or more items from a list or simply confirm an action. The basic types of query are a confirmation query, a data query, a list query and a global query.

A confirmation query poses a question to which there is only a positive or a negative response ”for example, confirming whether a saved game should be deleted. It is possible for a confirmation query to have a single answer. A data query requests that a user enter some text, for example, a player's name . The text can be plain or formatted as a password, PIN, phone number, date, time, duration, or floating-point number. Table 6-3 provides a more comprehensive list of the different types. A multiline data query can have two lines of text, each plain or formatted as per single-line data queries.


A list query contains a menu list, from which one or more items can be selected. Items in the list can contain one or two lines of text, with or without an icon or heading. As with all lists, items must have the same type of content.

Queries can be local to the application or global. The three types mentioned earlier are all local. Series 60 hides local queries when another application switches to the foreground, but global queries are not hidden.


You can use global queries for servers or applications that are currently in the background. Do this only if the information to be conveyed to the user is very important. If you display a global query from your application, the user cannot switch away to another application until they dismiss it. Global queries can be used to confirm an action, display a message or request an item be selected from a list. The different types are listed in Table 6-4.


The following section discusses three example applications that deal with data queries ( DataQuery ), list queries ( ListQuery ), and global queries ( GlobalQuery ). A confirmation query is very similar to a data query and therefore is not covered explicitly here, although sample code can be found in DataQuery .

The example application DataQuery provides sample implementations of both a confirmation query and a data query. As you would expect, the techniques involved in creating these dialogs are similar, and therefore only the data query will be analyzed in detail here.

DataQuery has just one menu option, Exit . If the user chooses to exit the application, a dialog is shown asking if they would like to save the game. This dialog is a confirmation query with soft key options of Yes and No , as shown in Figure 6-23.

If the user decides to save the game, a data query is displayed, requesting a name for the saved game, as shown in Figure 6-24. This subsection describes how to define and execute the data query. 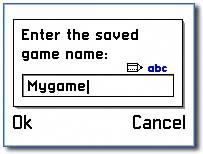 Defining a Data Query in Resource

As a data query is a type of dialog, it should be defined in a DIALOG resource.


The flags should be set to EGeneralQueryFlags or EAknGeneralQueryFlags ”both equate to the same thing. The dialog should contain a single dialog line, which contains the query control. An appropriate layout for the DataQuery example is EDataLayout ”other layouts are defined in avkon.hrh . An EDWIN control is used for the data entry. Optionally, it is possible to set the text for the control's label, but in DataQuery, the label text is set dynamically.


Table 6-3 shows the type of control to use for each type of query. Chapter 8 gives more details on EDWIN and other editor resources.

Constructing and Executing a Data Query

The general method for executing a data query is to construct it using the NewL() method and execute it using ExecuteLD() . In DataQuery this is performed in CDataQueryContainer::SaveGameL() . A descriptor representing the game's name is passed into the query on construction. This will be modified using the contents of the editor control.

After constructing the query, a prompt can be set that will be displayed with the control. This is done by calling the SetPromptL() method, passing in a constant reference to a descriptor containing the prompt. In DataQuery , a string is loaded from resource into the prompt descriptor. Because the method is not leave-safe, the query should be put onto the Cleanup Stack before it is called. However, before ExecuteLD() is called, it must be popped off the stack, because the query will put itself onto the Cleanup Stack as part of the execution.

A list query contains a menu list, from which the user can select one or more items. Items in the list can contain one or two lines of text with or without an icon or heading. As with all lists, items must have the same type of content. This subsection gives details of how to construct a list query, with the application ListQuery providing the basis of the discussion. This application is very similar to the previous example, DataQuery , but instead of asking the user to enter a name for the saved game, it presents a list of names for the user to choose from, as shown in Figure 6-25. 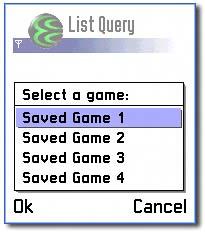 In ListQuery , the query list is created in CListQueryContainer::SaveGameL() . The CAknListQueryDialog constructor takes a reference to a TInt . This represents the index of the selected item and can be set to a nonzero value to preselect a particular item in the list. The TInt passed in is updated by the control with the user selection.

Setting the item array is done once the construction of the query is completed by PrepareLC() . In ListQuery this is performed in CListQueryContainer::SaveGameL() by calling the query's SetItemTextArray() method.

A list query is invoked in the same manner as other queries ”that is, using PrepareLC() and RunLD() or using ExecuteLD() . In ListQuery , PrepareLC() is used, so RunLD() is used for execution.


The execution methods return a TBool indicating whether the user closed the query by pressing Ok ( Etrue ) or Cancel ( EFalse ). Assuming the application owns the item array, it can obtain the selected item, by using the TInt passed to the query on construction, to index into the array of items. Here the resulting list item is passed to a local method called SaveGameToFileL() .

A global query always takes focus, even when the application that owns it is running in the background. The user cannot task away from a global query, they must dismiss it, and so this type of query should be used sparingly ”applications should not dominate the screen if the user has tasked away.

To produce a global query, an Active Object has to be constructed to handle the dismissal of the dialog.

The example application, GlobalQuery , implements a global query to inform the user that a game will be closed, as shown in Figure 6-26. This note is displayed when the application is opened. 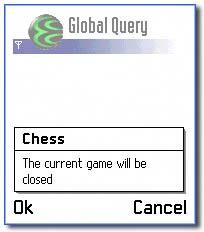 GlobalQuery does nothing more than create a global query and then handle its dismissal ”no other processing takes place. The query is created by the container class, CGlobalQueryContainer , during its construction. An Active Object, CGlobalQueryQueryHandlerAO , handles the notification of the dialog's dismissal from the framework. Because the GlobalQuery example is trivial, the Active Object simply informs an observer class that the dialog has been closed.

Since the container launches the query, it is also defined as the observer. The container class therefore implements the interface, MGlobalQueryCloseGameObserver , which has one method, CloseGameL() . A reduced class definition for CGlobalQueryContainer , presenting only the parts involved in the query construction, is shown below:


Before a global query can be executed, the Active Object ( CActive derived class) must be constructed and set active. As the query is shown upon startup of GlobalQuery , this is performed in CGlobalQueryContainer::ConstructL() .


The NewL() function of the Active Object takes a reference to a MGlobalQueryCloseGameObserver object. As the container class itself is the observer, a dereferenced this pointer is passed in.

In the GlobalQuery example, the Active Object's Start() method initiates the process. It simply sets it to be active using the SetActive() method.

The query itself is created in the container's ConstructL() method:

A global message query is constructed via NewL() and is executed using the ShowMsgQueryL() method. ShowMsgQueryL() has a number of parameters, some of which have default values and so are optional:

When the query is dismissed by the user, it causes the Active Object's RunL() to be called:


Testing the value of iStatus will reveal which soft key dismissed the query, and appropriate action can be taken. (The soft key values are defined in avkon.hrh .) In the GlobalQuery example, if Ok is pressed, MGlobalQueryCloseGameObserver :: CloseGameL() is called, which is implemented in the container. The Active Object is then cancelled, using its Cancel() method.

It is very important that the RunL() method should complete quickly.

In addition to global message queries, global confirmation queries and global list queries can be created. Creating these types of queries is very similar to creating the global message query. A global confirmation query should be created using CAknGlobalConfirmationQuery::NewL() and executed using ShowConfirmationQueryL() , while a global list query is created using CAknGlobalListQuery::NewL() and executed with ShowListQueryL() .