The functionality of Notes workstations, Internet access, and Domino servers depends on the effectiveness and capacity of networks. To plan a Domino network with sufficient capacity, you must consider not only the traffic to and from Domino servers, but also any other traffic on the network.

During the server setup program, Domino provides a list of Notes network ports based on the current operating system configuration. If these ports are not the ones you want to enable for use with the Domino server, you can edit the list during setup.

Consider Notes named networks (NNN) in your planning. A Notes named network is a group of servers that can connect to each other directly through a common LAN protocol and network pathway-for example, servers running on TCP/IP in one location. Servers on the same NNN route mail to each another automatically, whereas you need a Connection document to route mail between servers on different NNNs.

Figure 5-4 shows an NNN example. The servers are in the same domain and use the same network protocol. 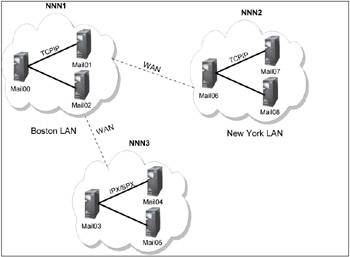 When you set up server documents, be sure to assign each server to the correct NNN. Lotus Domino expects a continuous connection between servers that are in the same NNN, and serious delays in routing can occur if a server must dial up a remote LAN because the remote server is inadvertently placed within the NNN. Also bear in mind that the Notes Network field for each port can contain only one NNN name, and no two NNN names can be the same.

NNNs affect Notes users when they use the Open Database dialog box. When a user selects Other to display a list of servers, the servers displayed are those on the NNN of the user's home server for the port on which the Notes workstation communicates with the home server. Also, when users click a database link or document link, if a server in their home server's NNN has a replica of that database, they can connect to the replica.

Communications between Lotus Notes and Lotus Domino run over the NRPC protocol on top of each supported LAN protocol. When a Notes workstation or Domino server attempts to connect to a Domino server over a LAN, it uses a combination of the built-in Notes Name Service and the network protocol's name-resolver service to convert the name of the Domino server to a physical address on the network.

The Notes Name Service resolves Domino common names to their respective protocol-specific names. Because the Notes Name Service resolves common names by making calls to the Domino Directory, the service becomes available to the Notes workstation only after the workstation has successfully connected to its home (messaging) server for the first time. (The protocol name-resolver service normally makes the first connection possible.)

There is an issue with the default size of the network queue as set on Linux with the kernel parameter tcp_max_syn_backlog. The default value is 5, but under certain conditions, that may not be large enough. On other UNIX systems the default is 20, which is a better setting.

It is recommended that the user change this parameter in their kernel by changing the value stored in /proc/sys/ipv4/tcp_max_syn_backlog (/proc/sys/ipv6/tcp_max_syn_backlog for ipv6) such that it is no less than 20. Since this is a parameter in the running kernel, it must be done each time the system is booted. Easy ways to accomplish this are by making an entry in your startup scripts (such as rc.local), or by making a change in sysctl.conf.

NAT is a method of translating an IP address between two address spaces: a public space and a private space.

For example, users inside a company access the Domino server based on its assigned IP address, which is a private address (192.168.1.1). Internet users must access the Domino server through a NAT router, which converts the private address to one of its static public addresses (130.20.2.2). Therefore, a Notes client accessing the server from the Internet uses the public address.