Just as ANSI standard C++ has a number of functions in header files that you can use in your programs, so does Visual C++. An exhaustive look at all of these is well beyond the scope of this book. However, we can take a look at some very commonly used functions. To begin with, Visual C++ supports all the header files, and all their constituent functions that you found in ANSI standard C++. It just adds a few more.

One of the most obvious things that Visual C++ offers is increased support for strings. In Visual C++, you need not deal directly with character arrays. There is a string variable that is actually a class, with many methods in it. The following example will illustrate this to you.

Step 2: Place four static boxes and four edit boxes on the dialog box as you see in Figure 15.18. 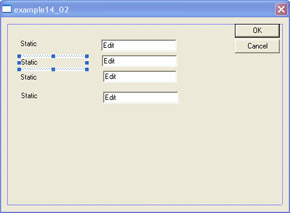 Step 3: Using the right mouse button to view the properties of each of the components, you will change the captions on the static boxes as you see in Figure 15.19. Also add another button with the caption String Operations. 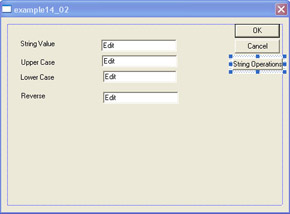 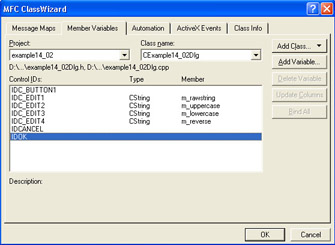 Step 5: Now we just need to add a little bit of code into the string operations button. Simply double-click on the button. (This will add the OnButton1 function to that button.) Then add the code you see here.

Step 6: When you execute the program, you should enter some text into the first Edit box then click the strong operations button. You will see something much like what is depicted in Figure 15.21. 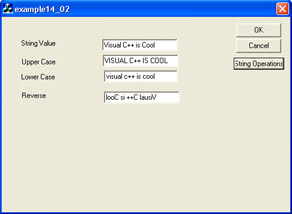 This example should have accomplished several things. First of all, it should have given you another chance to work with the Application Wizard, Class Wizard, and with basic Visual C++ components. Secondly, this example introduced you to some of the functions associated with strings in Visual C++. Remember that, in Visual C++, the string is not simply an array of characters; rather, it is a class. In fact, it is called the CString class. As with any class, it has certain methods. You have just seen the MakeUpper, MakeLower, and MakeReverse methods. Table 15.5 summarizes the main methods of the string.

There are other methods in CString but these are the most commonly used. You will find that Visual C++ offers a plethora of useful functions that can help you. Covering all such functions, or even a significant portion thereof, is well beyond the scope of this book. However, you will find a few commonly used functions demonstrated in this section of the book, and you can find even more by simply searching through the Microsoft Help files that come with Visual Studio.