The Fibonacci sequence is an interesting sequence of numbers. It is of particular interest to mathematicians, and is frequently used in computer science to provide a demonstration of recursion. Before we delve into this example of recursion, we should first explore what a Fibonacci number is.

The exciting part is where this algorithm pops up. This algorithm is seen throughout nature. The seeds of a sunflower, nodes on the shellfish, a rabbit breeding, and the like all exhibit the Fibonacci sequence. This is why this is so interesting to mathematicians. The sequence can be derived, to any length desired, by a simple recursive function. This is why it is of such interest to computer scientists.

Step 1: Enter the following code into a text editor and save it as

Step 2: Compile and execute the code. You should see something much like what is depicted in Figure 13.7. 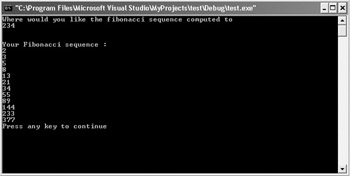 This example shows you another application for recursive functions. If you carefully examine the code, you see that the user sets the number that will be the cut-off point. That number and the current number being computed are passed to the Fibonacci function. As long as the cut-off has not been reached, the Fibonacci function will continue to call itself repeatedly, each time printing out the current number in the sequence. You can use the program you just saw in the previous example to compute the Fibonacci sequence as far out as you like.