Other important directories include Program Files shown in Figure 19.3. This is where most programs will be installed by default. This is also generally on the root drive. You also have probably noticed a default document directory on Windows machines. This is a directory that the operating system creates for you. It is meant to contain items that are considered crucial or fundamental to the system’s normal operation.

As was mentioned previously, in any operating system there are certain key directories. These directories hold certain types of files. This is true in Linux as well as Windows. Let’s examine some of those directories and what they contain. There are several directories in Linux, each with its own particular purpose. The File Manager, shown in Figure 19.4, is showing all the top-level directories. We will examine several of these in the following pages. 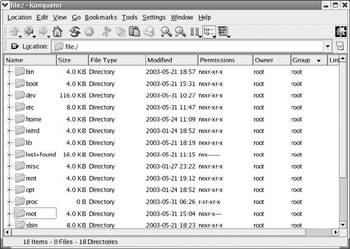 Figure 19.4: Directories in the File Manager.

/root: The /root directory is the home directory for the root user. It usually is not accessible to other users on the system.

/sbin: This directory is very much like /bin, but the commands are not intended for the average computer user. For that reason, /sbin is not usually in the default path of normal users but will be in root’s default path. That means that most users who log on cannot access /sbin or any commands stored there.

etc/passwd:In this subdirectory you will find the user database, with fields giving the username, real name, home directory, encrypted password, and other information about each user. Note that the password is encrypted. You cannot go to this directory and read other people’s passwords. That means that when the user manager runs, it is actually reading its information from this directory.

/etc/group:This subdirectory is quite similar to /etc/passwd, except that it describes groups instead of users. All the information about a group, including a list of user accounts that are members of that group, are stored in this directory.

/etc/inittab: This is where you change the configuration file for init. If you will recall, we previously discussed the pivotal role that init plays in a Linux system. It is recommended that you do not reconfigure this unless you are very sure of what you are doing. A novice user should not touch this directory.

/etc/motd: You may have noticed that after logon you get a brief message. This is called the message of the day, and it is found in this directory. This message is often used by system administrators to send information to all users.

/mnt: Although you may not be aware of it, any drive must be mounted prior to its use. The process of mounting a drive involves the operating system accessing it and loading it into memory. In Windows, this is all completely transparent. In modern versions of Linux, it is almost transparent. Most temporary storage drives, such as CD-ROMs and floppy drives, are mounted. The operating system does this for you, however. In older Linux/Unix systems, you had to use shell commands to mount the floppy drive before you could access it. This is no longer the case. However, you will find your floppy in a subdirectory of the /mnt directory, where all mounted temporary storage devices are found.

/boot:This directory contains those files that are used by the bootstrap loader. This means that LILO will look here for files it needs, as will GRUB (remember that with Linux 9.0, GRUB is the default boot loader instead of LILO). Kernel images are often kept here instead of in the root directory. This directory is critical to the boot process. It is another area that the novice user should leave alone.

It is not important that you memorize all of these directories. However, a basic familiarity with what is in the directories would be useful. This also leads us to the topic of maneuvering around the directories from the shell. There are a few rather simple commands that you can use to maneuver in the shell. You have seen the cd command. You can type in cd followed by the name of the directory and you will change to that directory. If you then type in just cd and press Enter, you will go to your home directory. Both of these commands are shown in Figure 19.5. 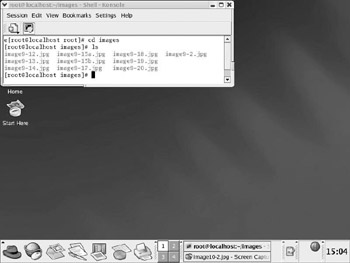 If you want to use the shell to get to any of the directories we have mentioned, you must first be at the root directory. You then type in cd /mnt (or whatever directory you want to change to). In Figure 19.6 you can see a change to the /mnt directory followed by the ls command being used to list files and subdirectories. 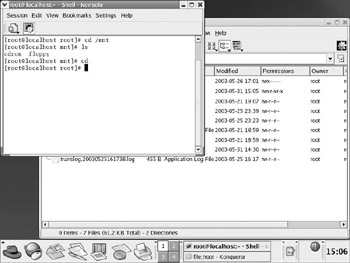 Windows provides only very limited capability to manage users or groups from the command line. This is due the fact, previously mentioned, that Windows is designed to be used from the graphical interface. Linux, however, can be used just as effectively from the shell as it can from the graphical desktop environments. In fact, some Linux enthusiasts might argue that it is better to use Linux from the shell. Whether you are using a desktop environment such as KDE or GNOME or are working from the shell, you will still need to manage users and groups.

Though it may seem odd, the first shell command we need to examine is the logname command. This command will tell you what user is currently logged on to a terminal. This might sound odd, but it is necessary. Especially in multiuser environments, you may not know what username was used to log on to a system. This means you will not know what privileges he has. The logname command is typed in just as you see in Figure 19.7, and it tells you the username that is currently logged on to that system.

You can specify a group for the user to belong to, expiration date, password, and everything you might specify through KDE’s user and group manager. However, in many cases you will just specify a username and password. Figure 19.9 shows a new user, named someusername, with the password of password, being added with the useradd command.

Figure 19.9: Adding a user with useradd.

As you may have guessed, you also can add groups with a very similar command, groupadd. This command has fewer flags. You can essentially specify the group name and group ID and very little else. Figure 19.10a shows a new group named somenewgroup being added.

Figure 19.10A: Using the groupadd command. 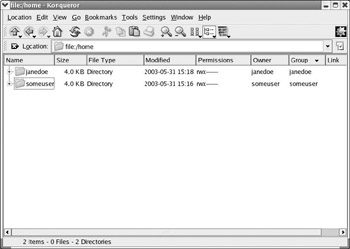 Another interesting command that is closely related to useradd and groupadd is the groups command. This command will tell you what groups the currently logged-on user is a member of. You can see this command used on the root user in Figure 19.11.

As you can see, managing users and groups from the shell is not really any more difficult than from the graphical desktop environments. It may be a little less visually appealing, but you can still perform the required functions.