This chapter is about Linux administration from the shell, and the most fundamental administrative task would be to shut down or reboot the machine. As even a casual Windows user, you realize that turning the power off repeatedly is not very good for your system. With Windows XP you would go to the Start menu and choose Turn Off the Computer, and you would be presented with a screen like what you see in Figure 19.1.

Before the advent of Windows 95, Windows 3.1 was a desktop environment separate from the underlying operating system, DOS, and you could invoke Windows from DOS by typing in win. With a shell in Linux, you will still need a way to shut down the machine, reboot the machine, or invoke the desktop environment. In the shell you accomplish all of this with run levels.

A run level is the level at which your system is currently running or operating. You can change the run level any time you like from the shell by typing in init followed by the number designating the run level you want to use. There are six run levels in all. Each designates that progressively more of the system is functioning. Run level 0 designates that the system is shut down. Run level 1 indicates the system is running in shell mode only, no graphical interface and no network support. This moves progressively to run level 5, which means that full network support and a graphical desktop environment such as KDE or GNOME is running. The last run level is 6, which designates a reboot. All of the run levels are summarized in Table 19.1.

What all of this means is that if you type init 0 from the shell, the machine will commence its shutdown process. However, if you type init 6, the machine will reboot. This may lead you to ask, what is this init? The init command, like all shell commands, is a program built into Linux shells. The init program is very important. In fact, it is absolutely essential to the operation of a Linux system. The init program literally initializes your system. When used as a shell command, it initializes your system to the specified run level. This is why it is also used to invoke certain specified run levels. When you type in init 6, you are saying to initialize the machine to run level 6. You can see this in Figure 19.2. 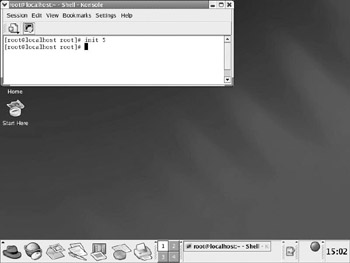 It is important that you recall that all shell commands are actually programs. As was previously mentioned, the init program just happens to be a very important one. What is it that init does that is so important and how does it work? Some readers may not want this level of detail about init and should feel free to skip the following paragraphs. However, for the curious reader who wants to understand what is happening in the background, the following few paragraphs will explain quite a bit. The init program works to initialize the machine. It takes over the boot process as soon as the Linux kernel is done loading into memory. The Linux kernel finishes its part of the boot process by starting the init program. This means that init is always the first process on your machine, and that is why its process number is always 1. init, like all commands is really a program, and can be found in the directory /sbin/init. If the kernel can’t find init, it tries to run /bin/sh, and if that also fails, the startup of the system fails.

When init starts, it completes the boot process by performing a number of administrative tasks. The init program will start by checking filesystems, starting various services, and starting they getty process. The getty process handles input from the keyboard. You might not have thought about it before, but there must be a process on your machine to handle everything your computer needs to do. With operating systems such as Windows, all of that is transparent to you. You cannot access background system processes, and even system administrators are often unaware of their existence. However, Linux and all Unix-like systems allow you to access many fundamental system processes.