This one is an oldy but a goody. Asteroids was a very popular arcade game in the early 1980s. KAsteroids is a Linux version of this game. You can see the KAsteroids screen in Figure 17.8. The goal of KAsteroids is to use your spaceship to destroy asteroids and not get smashed by any asteroids. The KAsteroids game actually has much more realistic asteroids than did the original game. 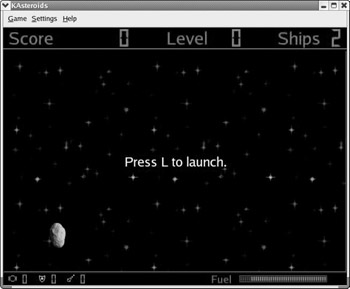 The game itself is very simple. You use the L key to launch the game, then you maneuver your ship using the arrow keys. You fire at asteroids with the spacebar. Destroy as many asteroids as you can without getting smashed by one yourself. Figure 17.9 shows KAsteroids in action. This game may not prepare you for NASA, but it can be a lot of fun. 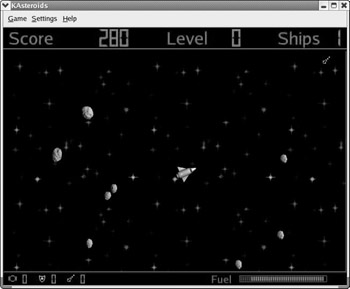