One of the major strengths of Application Designer and the other Distributed System Designers is that they encourage the design of systems that can actually be implemented and deployed. In this section, we'll show you just how easy it is to move rapidly from a design to an implemented and locally deployed system.

It's precisely because of the Distributed System Designers' strengths in this area that we'll be devoting plenty of attention to coding, in what you might have expected to be purely a "design" chapter. Don't worry as it won't be too taxing and we won't be asking you to work with complex database schemas, XML files, and the like. You'll do just enough to get the design up and running to the point that you could credibly take it forward.

Before you implement the design, we'll invite you to set the implementation languages for the various applications by clicking each one in turn and selecting the relevant language in the Properties window:

Of course, you're free to choose whatever languages you wish, but the subsequent discussion of the generated code will make more sense if you stick to our choices.

A Confirm Application Implementation dialog box will appear showing the applications to be implemented. Clicking OK will cause Visual Studio to begin generating code and creating deployment websites. At the end of this process, you will see several new projects in the Solution Explorer, one for each implementable application.

If you had represented the MarketMaker third-party application as an ExternalWebService (we told you how in the "Representing an existing service" section earlier in this chapter), it too would not have been implemented; but as there was no such service in existence already, we modeled it as a conventional ASP .NETWebService to demonstrate the service layering. This means it will have an implementation project. Obviously, the database will not have been generated as an implementation project, but it will be represented as a connection in its client application.

A note about SDM files

The MarketMaker project will appear in Solution Explorer under location C:\…\MarketMaker\ (for file-based deployment) or http://www.localhost/MarketMaker (for IIS deployment), and will contain several automatically generated files. The important files for our discussion are as follows:

The file DealingService.cs contains the implementation code for the service of that name exposed by the MarketMaker application. You will modify this file.

The following listing shows the code that was generated for the MarketMaker.cs file. Notice how the Summary texts that we entered into the Web service Details window have found their way into comments in code. All of this code was generated automatically, except for the highlighted lines. You should add those manually to provide basic implementations of the web methods:

If you really did want to place stock deals into a database, that is where your database access code would go. To keep it simple, you're just returning the number of shares sold (if the deal went ahead) or 0 (if it didn't) on a random basis. Client applications need not know that you've used such a stubbed-out implementation.

Once you have made the code modifications highlighted in the preceding section, you are in a position to take the MarketMaker application—specifically, its DealingService Web service—for a test drive. Just right-click the DealingService.asmx file, choose View in Browser, and Internet Explorer will open at the URL for the service.

You'll see options for the two operations. If you choose buyStock, you will then be able to fill in the form shown in Figure 2-8. 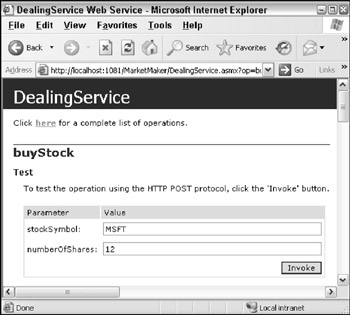 Remember that the buyStock operation returns the number of shares actually bought, or 0 if the deal could not be processed. Given the input data of stockSymbol=MSFT, and numberOfShares=12, the response in XML is as follows:

If you enter 5 as the numberOfShares, then you get the following response, demonstrating how we've simulated failed deals using the random number generator:

The MarketMaker project will appear in the Solution Explorer under location C:\…\StockBroker\ (for file-based deployment) or URL http://www.localhost/StockBroker (for IIS deployment) and will contain several automatically generated files. The important ones for our discussion are as follows:

Between them, the files DealingService.asmx and StockQuoteService.asmx contain the following Web service definitions with links to the code-behind file:

This code simulates the action of the getQuote operation by simply returning a random number between 0 and 100 as the latest stock price, regardless of the stockSymbol passed in. Remember that you're implementing this method purely to test the interconnectedness of the overall design, not to create a fully functional stockbroking system.

In the code that follows, the buyStock and sellStock operations are implemented by delegating to the same-named services of the (third-party) MarketMaker application. The remote services are accessed via local Web service proxies that for our purposes are identical but which hide the technical details of sending SOAP messages to those services.

With that code in place, you're now ready to test the StockBroker application.

Test-running the DealingService on this application will produce the same results as when you tested the same service on the MarketMaker application; but as you test this service yourself, bear in mind that something quite different is happening under the covers: a Web service delegating to another Web service.

The StockQuoteService is new in this application, and Figure 2-9 shows it in action. 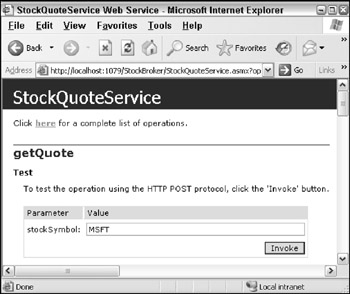 For stockSymbol MSFT (Microsoft), the resulting XML response is as follows:

Each time you run it, the result will be different because you implemented this method with Rnd() to simulate the volatility of share prices. (Of course, it's only a fictional share price, so don't go investing on the back of this information!)

That's the last of the Web services that we designed. You have tested them independently, and if you're happy that they're all running correctly, you can now proceed to look at the end-client applications shown on the application design diagram.

The StockQuoteApp project will appear in the Solution Explorer under location C:\…\StockQuoteApp\ (for file-based deployment) or URL http://www.localhost/StockQuoteApp (for IIS deployment), and will contain several automatically generated files, of which two are important for our discussion: Default.aspx (the main web page for the application) and Default.aspx.cs (the code-behind file).

The following listing shows the code that will have been generated for the Default.aspx file, with the additions you should make highlighted:

That code defines a user interface comprising two labels, two text boxes, and a button. Actually, we didn't write the code by hand but generated that too from a UI design drawn using the web forms designer. You can design the form (which you'll see soon) or enter the preceding code as you see fit.

The code-behind file handles the button press, as shown in the following code. Again, the code you should enter is shown highlighted:

A proxy to the StockBroker's StockQuoteService is created and its getQuote operation code invoked with the text supplied by the user in the StockSymbolInput text box; the result is displayed in the StockPriceOutput text box.

Figure 2-10 shows what will happen if you enter a stock symbol and press the Get Quote button. Of course, the latest stock price will be different each time you run it.

Note that we have now completed the client-server pair of the StockQuoteApp ASP .NET web application and the StockBroker Web service.

As a Windows application, the DealingApp will be represented as a folder in the Solution Explorer, with generated files stored locally in the solution directory, so there will be no URL associated with this project. Only one file in this project requires further investigation, DealingForm.vb, which represents the application's main Windows Form.

To complete the implementation of this application you'll need to open the file in design view and use the Windows Form designer to come up with something like what is shown in Figure 2-11.

The first text box (named StockSymbolInput) enables you to enter a stock symbol for which the user can obtain the latest price by pressing the button marked Get Latest Price (and named QuoteButton). The result is to be displayed in the second text box, named StockQuoteOutput.

Once the user has obtained the latest stock price, he or she can enter a number of shares into the third text box (named QuantityInput) and initiate a deal by pressing the Buy button (named BuyButton) or the Sell button (named SellButton).

Once you've designed the form, you'll need to add some code behind each of the buttons, which you can do easily by double-clicking each button in Design view.

The code behind each of the buttons should be as follows (note that in each case, one of the operations on one of the Web services of the StockBroker application is invoked):

For this application, we've already shown you what happens when it is run. Figure 2-11 showed not only the layout of the form, but also the data used to test the stock price functionality. When the user enters a number of shares—in this case, 100—the outcome will be a message box with the following information:

That completes the implementation of the second client application—this time a Windows application that demonstrates the end-to-end connectivity of the design. The application invokes an application-specific Web service, which delegates to a (third-party) business service, which in turn would write to the database if we had set one up.