One of the key reasons for examining both products is to determine which one is the most appropriate for your environment. In most cases, your best bet is to move over to Team Foundation version control because you can also pick up the integration with the rest of Team System. In other words, you can now run automated tests on your code, build the source using Team Foundation Build, create work items to monitor bugs, receive automated alerts, apply check-in policies, apply a very granular level of security and generate detailed reports on everything from code churn, bug rates, and build results. Team Foundation version control is part of a greater Software Configuration Management (SCM) solution. Unlike Visual SourceSafe, Team Foundation version control is designed to scale to large development teams and can support distributed and outsourced teams in remote locations. Plus you will avoid problems such as the occasional corruption of your source code files (since the data is written to a database rather than flat files).

Microsoft Visual SourceSafe 2005 retains a role for smaller development teams. It has a few enhancements such as HTTP support, a better lock-contention mechanism, better performance over a network, and internalization support. Visual SourceSafe 2005 is available for a fee and is bundled in select versions of Visual Studio 2005.

As a rule of thumb, if you need Team System to manage your development projects, you should seriously consider migrating your code to Team Foundation version control. Let's quickly compare the features of both products in Table 20-1.

Microsoft has developed a migration tool called VSSConverter to enable you to migrate your Visual SourceSafe code to Team System. The migration can be broken into two phases: In the first phase, you analyze the VSS database, and in second phase, you do the actual migration from the VSS database to Team Foundation version control.

The first phase, or the analysis phase, is going to generate some reports for you, indicating the potential data loss that may occur during the migration. Using these reports, you should be able to configure some of the migration options to minimize this loss. Be aware, however, that some data loss is unavoidable. This is due to some aspects of the VSS data not being mapped into Team Foundation.

Once you are satisfied with the results from the first phase, you can proceed with the actual migration. Once the migration is complete, you will again receive a report, detailing any errors or warnings encountered during the migration.

While a detailed walkthrough of the conversion process is outside the scope of this book, we will present a high-level overview, as well as refer you to where you can obtain more detailed information. The following paragraphs describe the general process for migrating from VSS to Team Foundation version control.

First, you need to install VSS on the machine on which you will be doing the conversion. Remember, the VSS database that you will be migrating to must be version 6.0. If it is an older version, please use the DDUPD utility (at http://www.msdn.microsoft.com/library/en-us/guides/html/vstskupgradingvisualsourcesafe.asp) to upgrade the database. Make sure that you install VSS 2005 on the conversion machine as well. To decrease the migration time, it is recommended that you copy the VSS database to a local directory on the conversion machine. Also, running the Analyze.exe application (at http://www.msdn.microsoft.com/library/en-us/guides/html/vsgrfss_analyze.asp) can help you find and fix any integrity and corruption issues before you begin the analysis and migration of the database.

At this point, you are ready to run your analysis. Remember, the migration process is going to be time consuming, depending on the amount of data involved. One recommendation is to migrate sources one project at a time, which will typically be one folder. Once you know which folders to migrate, you will create the settings file. This is an XML file containing all the options for the migration. Once this file is ready, you run the VSS Converter application to begin your analysis. For more detailed information on the analysis phase, please refer to the MSDN Library: Preparing To Migrate From Visual SourceSafe to Team Foundation (http://www.msdn2.microsoft.com/en-us/library/ms181246).

After the analysis is finished, a report file is generated. This file indicates some of the conversion issues that will occur during the migration. Here is a brief list:

The analysis phase will also generate a user map file. This file shows all the users who have performed any sort of operation on the folders that were analyzed. This file is also used to map Visual Studio users to Team Foundation users. (Take note that this step is optional.)

Before you can move over the source code, you must create a Team Project that matches the name of your VSS repository. The VSS files will subsequently be moved over to the corresponding branch on Team Foundation version control.

Finally, you are ready to perform the actual migration. Before you begin, make sure that you have identified the destination folders in Team Foundation version control for each folder in VSS. If the destination folder already exists, it must be empty. If the destination folder does not exist, the VSS Converter application will create it automatically. Next, you need to make modifications to the settings file (for example, map the VSS users with the Team Foundation server users) to prepare it for migration. At this point, you are ready to run the VSS Converter application, and migrate the database. For more detailed information on the migration phase, please refer to the MSDN Library: Migrating From Visual SourceSafe to Team Foundation (http://www.msdn2.microsoft.com/en-us/library/ms181247).

Once the VSS Converter application is finished, you need to review the report file to see what errors and warnings occurred during the migration. You will also need to change the source control bindings of the solution files from VSS to Team Foundation. (See http://www.blogs.msdn.com/akashmaheshwari/ for more information.)

If you work in both Visual SourceSafe and Team Foundation Source Control, you can select what version control system you want to use. Visual Studio 2005 has a plug-in selection option that can be accessed by clicking Tools

Options and then Source Control

Plug-In Selection. The default plug-in is Visual Studio Team Foundation Server. (Team System supports an extensible plug-in architecture.) You also have the option of connecting to another source control application such as Microsoft SourceSafe 2005. Figure 20-1 illustrates the Source Control 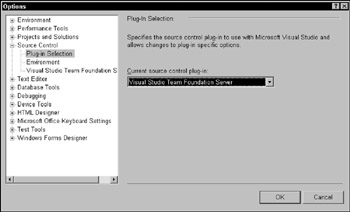