New Team Project—you have to be connected to a Team Foundation Server for this option to show up), you will be provided a series of options. You'll get three source control options to set up a new parent folder (as shown in Figure 20-2). 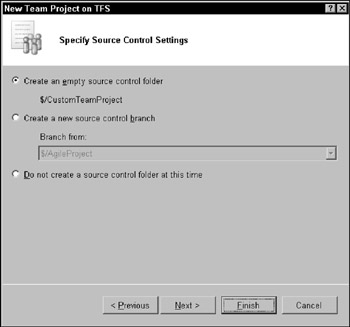 In this window, you have the following three options:

Before you can start using the version control feature, you should determine who on your team will take on the responsibility of Administrator. The rest of the individuals on your team will be typically classified as Contributors. Keep in mind that the way you organize your roles should be determined by a matter of convenience and organizational requirements. For example, if you are in a small team, you might want to make everyone an administrator to maintain as much flexibility as possible. The roles and responsibilities shown in the following list are a configuration appropriate for a large organization:

Setting up your workspace

Think of a workspace as simply your personal local folder to work on source code. A workspace is associated to a folder in Team Foundation version control. Whenever you check-out code, the code from the repository is placed in your workspace and vice-versa. The core advantage is isolation— workspaces allow you to work on an application without affecting any changes the rest of your team might be making.

To set up a new workspace, click on File

Workspaces. You'll get the Manage Workspaces window (as shown in Figure 20-3). 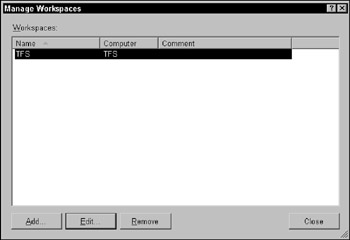 The next step involves adding a new workspace. Note that within each workspace, you can create several one-to-one mappings between local folders and repository folders. Clicking the Add button on this window opens the Add Workspace window, as shown in Figure 20-4. 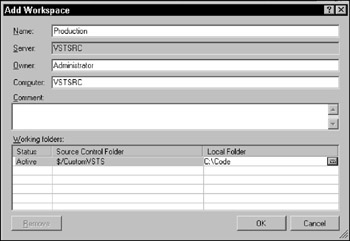 In the preceding example, the Code folder on your local C: drive will synchronize with the CustomVSTS folder in Team Foundation version control.