Creating and Running a Generic Test

In the following sections, you will create a new generic test, see how it runs, and view the results of the test. In the process, we will discuss exit codes (otherwise known as ErrorLevels).

For this example, let's assume that you have a simple C# app that runs a web search engine query. You have half a dozen unit tests to test your code, but before they kick off you want to verify that the server exists. One possible solution would be to write a unit test with code that tries to hit the server. Another possible solution is shown in the following example, which uses the ping.exe utility included with Windows.

Project. This will bring up the New Project dialog. Select the Test Documents under the Test Projects type and the Test Project template, give it a name, and click OK (see Figure 17-2). 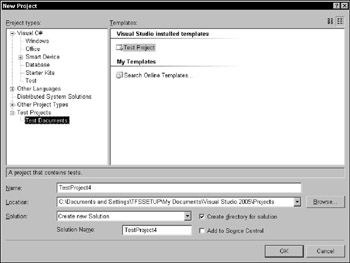 A new test project will be created with a text file of notes (AuthoringTests.txt), a manual test (ManualTest1.mht), and a unit test (UnitTest1.cs). These can all be deleted from the project for the sake of this example.

This is where we use a generic test. Right-click on the project name to bring up the context menu and select Add

New Test. Select New Test instead of Generic Test so that you can give the test a name using the Add New Test dialog shown in Figure 17-3. 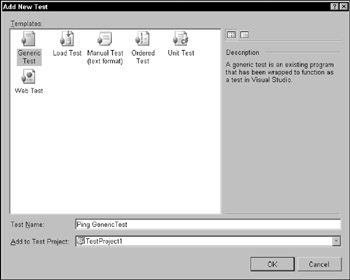 Name the file Ping.GenericTest and click OK. As you can see, a generic test is just one of the several built-in test types available. Other types include load test, manual test, ordered test, unit test, and web test and are discussed in other chapters of this book. 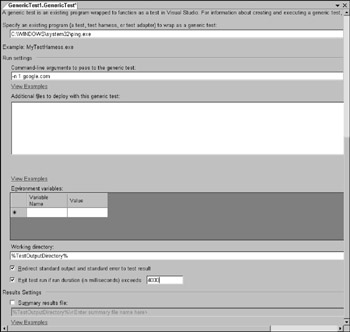 In the text box at the top of the editor under the "Specify an existing program to wrap as a generic test:" label, enter the location and name of the program. In our case, C:\WINDOWS\system32\ping.exe. The option of selecting a program by clicking on the ellipsis located next to the text box is also available. Under Run settings, in the "Command line arguments" text box, enter -n 1 google.com. Now save your entries (Ctrl+S) and close the editor for this generic test (Ctrl+F4).

The –n 1 tells ping.exe to attempt to reach the server only once. ping.exe sets an ErrorLevel of 0 for success (Passed) and 1 for failure (Failed), which is what the generic test type expects.

The filename of the generic test does not affect the displayed name of the test. To rename the test, view the Test Manager by selecting Test

Figure 17-4 also shows a number of options that you can configure in the generic test properties dialog box:

If you created a .NET executable being run by the generic test, you can obtain the value of the environment variables in your code using the Environment class:

Back in the Microsoft DOS days, an executing application could leave a trail when it exited by returning a single integer back to the operating system as an exit code. This exit code was called an ErrorLevel because it was designed to report an error, and, if so, a value indicating the type of error. In batch files, this ErrorLevel could then be used to test the result of an execution, and branch if there was an error. An ErrorLevel of 0 indicated a success, and anything else was some form of an error. The DOS batch if errorlevel [x] statement would result to true if the last statement's ErrorLevel was equal to or greater than [x]. For example:

The environment variable errorlevel is set by the command shell to the exit code of the application. This would branch on any ErrorLevel greater than 0. The only common standard is that 0 indicates a success and anything else is a failure. The ErrorLevel is a standard integer with possible negative and positive values. The interpretation of what type of error occurred within the application by the resulting ErrorLevel is determined by the application. One would have to read the application's documentation, view its code, or deduce by trial and error what exit code was produced by what error.

You can easily return an exit code from a .NET console application. Most importantly, change the Main method from returning void to returning an int. The following short example will return the exit code provided on the command line. Its only "output" is the ErrorLevel code:

Another approach, which works from within a console application or a Windows application, is setting the Environment.ExitCode property:

Exit codes can be negative, but negative values are reserved for system ErrorLevels and should typically be avoided. For example, an ErrorLevel of -1073741510 is returned if the keyboard combination of Ctrl+Break is used during execution of a .NET console application.

The next step after creating the generic test is to run the test and try it out. The Test View window provides a quick and easy way of running a set of tests. To view the available Team Test windows, from the main Visual Studio menu, select Test

Select the Ping generic test from the list and click the Run Tests button to execute the test (see Figure 17-5). 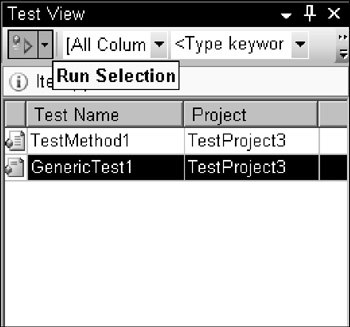 As the test is run, the Test Results dialog appears, as shown in Figure 17-6.

You know that the test pings http://google.com, so the test should pass. If we double-click on the test line that has just passed in the Test Results window, a report of the test run will display. Figure 17-7 shows the output captured from ping.exe. The fields Internal Test Name and Detailed Results File are not applicable to a simple generic test with only a return result and are discussed in the section "Extended Return Results." 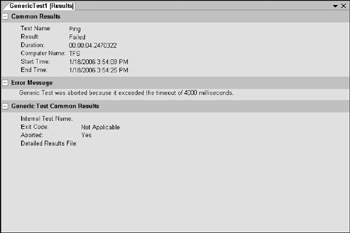 Let's see what happens when a test fails. Go back to the Generic Test properties document (Figure 17-4) by double-clicking the Ping.GenericTest file in the Solution Explorer. Change google.com to nowhere.xyz, save it, and close the editor. Re-run the test from the Test View window (refer to Figure 17-5), and this time the test will fail, as shown in Figure 17-8. Notice that the exit code is 1, which is not 0 and thus indicates a failure.

Quick links are visible on failed test results that conveniently allow you to re-run or debug the original test directly from the Test Results window.

This example has demonstrated how to leverage an existing application to quickly create a test, how to run the test, and how to see the results when it passes or fails. Now you may want to create your own external applications to wrap in a generic test.