In conjunction with Team Foundation Server and Team Explorer, Team Foundation Build server allows you to create an end-to-end build process. You can retrieve code from Team Foundation Source Control, compile it, run tests against the compiled code, release the builds onto a file server, update work items accordingly, and publish build reports of the information. Moreover, you can do all of this using a five-step wizard.

Team Foundation Build (or Team Build as it is sometimes referred to) uses a build engine called MSBuild. MSBuild is the new XML-based build engine of the .NET Framework 2.0, and is distributed as part of the framework. You can make use of MSBuild using Visual Studio or the command line, it's your choice. MSBuild uses XML files to help configure the build process. Team Foundation Build is a build automation tool. It follows a series of tasks to complete a build, utilizing MSBuild where appropriate to help with the process.

Let's look at the architecture that makes up Team Foundation Build, and then drill down into how we configure and run these builds, and how we can view the results. 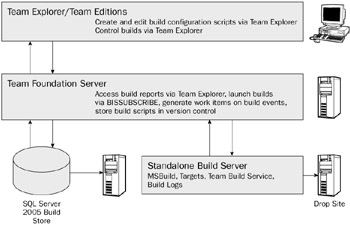 Once the build process is complete, the built files are placed on the drop site. Team Foundation Server finishes gathering information on the build process, including its success and failure, and stores that information for reporting purposes. Finally, again using Team Explorer and the Team Build Browser, you can view the build reports to determine the success or failure of your build process.

For information about multiple build configurations of Team Foundation Build, refer to Chapter 15. Now that you have a general understanding of the architecture, let's look into what is required to configure a build.

A normal build usually involves several steps, such as retrieving the latest code from the source-control system, compiling the code, running tests and analysis, and generating reports. Most people use some sort of build scripts to automate this process. Team Foundation Build is no different. In Team Foundation Build, these scripts are called a build type.

A Team Foundation build type allows the user to define all the steps necessary for a particular build to execute, as well as any specific parameters needed for the build. Using Team Explorer and the New Team Build Type Creation Wizard, you can easily create a build type. The build type is just an XML file. Once it has been created, it is stored in your project in the Team Foundation Source Control system. From there, you can easily check it out and modify the file to work with your specific build environment, should you so choose. You can also configure multiple build types, which allows you to specify different configurations for your nightly builds as opposed to your continuous integration builds. After all, each build type is nothing more than a different build script that contains different steps and different configurations, depending on what you are trying to achieve with the build.

In the rest of this section, we walk through creating a build type using the wizard, and examine the files created. Later in this chapter, we briefly discuss how to modify an existing build type.

Assuming all those pieces are in place, let's move on to creating an actual build type with the wizard: 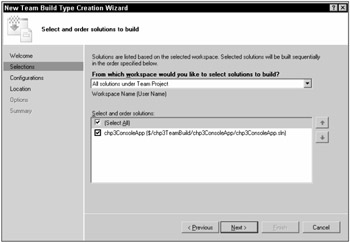 Once the build type is created, you can see it under the Team Builds folder in Team Explorer. When the build type is created, it is automatically checked in to the version control system at $/{Team ProjectName}/TeamBuildTypes/{Name Of The Build Type}/TFSBuild.proj. There are some other files created and put there as well, but for the time being, we are just concerned with the TFSBuild.proj file. This build type file contains the MSBuild script that drives the build process for this particular configuration.

Next, the build machine is specified, using the <BuildMachine> tag:

If you build server changes, you would need to change the server name here, to ensure the appropriate build server is used.

You specify the Team Project you want to build using the <TeamProject> tag:

The build directory and drop location are listed using <BuildDirectoryPath> and <DropLocation>, respectively:

If you need to add more solutions to this build type after its initial creation, you need to add another <SolutionToBuild> tag to the appropriate item group in the file:

This configuration section creates a Debug release of the application that runs on any CPU.

Once a build type has been created, you can execute a build. This can be done using Team Explorer or from the command-line tools. When a build is executed, it moves through each step of the build type and performs the necessary actions, including retrieving code from the repository, running tests, and creating build metrics for reporting purposes. 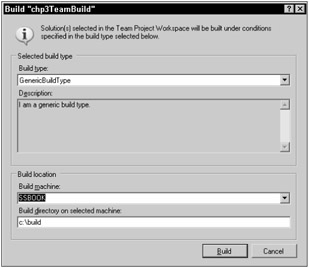 Now all you have to do is click the Build button in the dialog box to start the build process.

To start the build process using the command-line tools, you will use TFSBuild.exe application to schedule a build using the Windows scheduler. The Team Foundation Server Scheduler does not provide the ability to schedule builds, so you have to set this up yourself, as you will see later in this chapter. This application is located at C:\Program Files\Microsoft Visual Studio 8\Common7\IDE. There are four commands used in conjunction with this tool: delete, help, start, and stop. Here is the general syntax for starting a build using the command line tools:

So, to build the same project we built previously with the wizard, you would do the following:

Please consult the online help (http://msdn2.microsoft.com) for more information on the other commands associated with TFSBuild.exe.

Let's look at some Team Foundation Build internals. Figure 3-4 shows the build process in sequence. The tasks in the hexagons are built into the Microsoft.TeamFoundation.Build.targets file. The target elements within the file help coordinate the project building process. The task elements define what should trigger within the build. You learn how to modify targets and tasks later in the chapter. 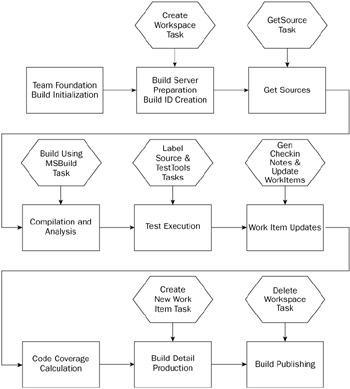 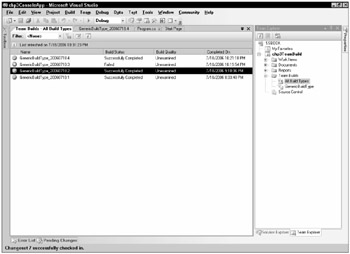 Double-click a specific build to view a detailed build report, as shown in Figure 3-6 and Figure 3-7. 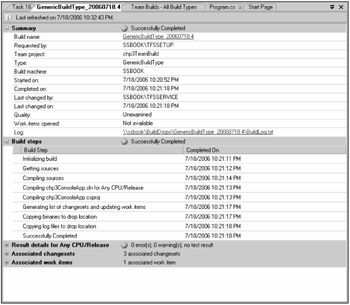 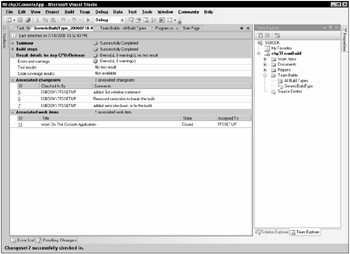 A Build Report can contain up to five different sections:

The Summary section contains the basic information about the build, including the build name, who ran the build, the build type used, start and end dates, and the current state of the build, as well as a few other pieces of information.

The Build Steps section shows all the steps used by a particular build, as well as whether the build was successful. Each step contains a timestamp, showing the date and time each step was initiated. Some of the possible build steps include:

The Results detail section contains information concerning any errors and/or warnings generated, test results, and code coverage results. With errors and warnings, it displays compilation and static analysis errors. You can click a link to view specific information concerning the error or warning. The test results show all the information for all the tests run during the build, including a link to the test, total number of tests run, and test results, such as passed or failed. There will be a Results Detail section for each build configuration you set up in the build type.

As you can see, the build process and subsequent build reports are deeply integrated into the rest of Team Foundation Server.