When I got started writing software, unit testing was a purely ad hoc (and often manual) process. After writing each small chunk of code, I’d run the application and test it by hand to see whether it worked properly. Sometimes I’d have an automated testing tool that could simulate key presses and mouse clicks to make this easier. Sometimes I’d write custom code in a separate module in the program to exercise the code I was planning to ship. But all in all, my unit testing was a chaotic process.

In recent years, unit testing has become a much more structured process for many developers. The major cause for this change was the release of JUnit, a unit-testing framework for Java code written by Erich Gamma and Kent Beck (if you’re doing Java development, you can download JUnit from www.junit.org/index.htm). JUnit lets you construct unit tests in a separate Java module. It runs the tests for you and keeps track of which tests your code passes at any given point.

JUnit has been ported to many other development environments. By now there are dozens of tools, both free and commercial, that owe their basic design to the JUnit project. These are the tools that many of us now automatically think of when you mention unit testing, and they’re the ones that I’ll be using in this chapter.

As I mentioned, the basic unit-testing framework has been ported to many different languages and development environments. In fact, there are at least five unit-testing tools for Microsoft .NET developers:

All of these products offer versions that you can download and evaluate. When you’re ready to start unit testing, you should look at the products within your price range to determine which one works best for you. In this chapter, I’ll use NUnit to demonstrate the principles of unit testing and test-driven development.

In this section, I’ll work through the mechanics of using NUnit for unit testing. I’ll use the DownloadEngine component as my example component for testing.

NUnit recognizes classes decorated with the TestFixture attribute as containing unit tests. Although you can put these classes directly into the code that you’re testing, I prefer to create a separate class library project to hold the tests. This makes it easy for me to be sure that I don’t accidentally ship testing code with the final product. So to begin, I’ve created a new C# class library project named DownloadEngineTests.

To use NUnit, you need to set a reference within the test project to the nunit.framework assembly. When you install NUnit, it automatically places this assembly into the Global Assembly Cache and makes it available in the Add Reference dialog box.

You can have any number of test methods within a single test class. Test methods are methods where both of these things are true:

The test here is the TestDownloadPath method. This test first creates an instance of the Engine object exposed by the DownloadEngine project. It then sets the DefaultDownloadFolder property of that object to a fixed string. Finally, it uses the AreEqual method of the NUnit Assert object to assert that the retrieved property will be that same string. If the string has the expected value, NUnit will consider the test to be a success. If the string has any other value, the test will fail.

At this point, you’re ready to run the first test. Compile the test assembly to make sure that you didn’t make any syntax errors.

Nunit-Gui. Launch the application and select Open from the File menu. Open the DownloadEngineTests.dll assembly. This will display the DLL name, the namespace name, the class name, and the test name in a tree view. Click the Run button. NUnit will run the tests and display the results, as shown in Figure 5.1. All of the bullets in the tree view will turn green, indicating successful tests. 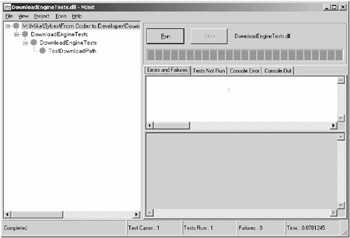 These tests are pretty straightforward: Each one starts by setting up the required objects. It then deletes any existing file from the target location, downloads the file, and checks that it ended up in the expected place. NUnit’s Assert.True method lets me use any method that returns a Boolean value; in this case, the File.Exists method (from the System.IO namespace) provides an easy way to see whether a file exists after the download finishes.

When you recompile a class containing NUnit tests, NUnit automatically adds the new tests to the tree view (assuming that you’re using the GUI tester). So all you need to do is switch back to the tester and click the Run button. Figure 5.2 shows the results in this case. 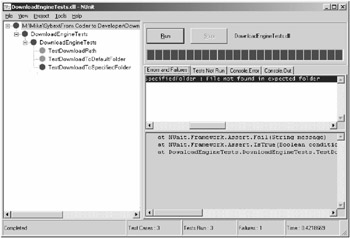 One of the new tests passed, but the TestDownloadToSpecifiedFolder test failed. The main bar in the NUnit window is now an angry red. This means that at least one of the tests failed.

Looking at the NUnit interface, you’ll see that the file didn’t end up in the right place on the hard drive. Why is that happening? The obvious approach to this problem is to set a breakpoint inside the test code and find out. But if you try this, you’ll discover that your breakpoint is never hit. That’s because NUnit launches its tests on a separate thread. You can debug the code that NUnit is testing, but it takes a bit of extra work. Follow these steps to debug a unit test in action:

Oh, the error? Just a bit of late-night coding stupidity on my part. Here’s the code that I originally saved to handle the DownloadFolder property of the Download class:

Of course, with the test failing, it’s easy to see that this code should be changed:

With this change, all three of the unit tests pass with flying colors.

You can also use NUnit to test an exception—that is, you can test whether a piece of code throws the exception that you think it should. Here’s an NUnit test for the exception that I expect DownloadEngine to throw when it’s given an invalid URL:

When you want NUnit to check that your code throws a particular exception, you need to add the ExpectedException attribute to the test in question. This attribute has a property that indicates the type of exception that you’re expecting. If the test throws the specified exception, it’s considered as passing.

One problem you may face from time to time is how to test parts of a project before other parts are finished. For instance, here’s a little preliminary code from the logic layer of the Download Tracker application:

This code handles moving downloads to the database and back, using an object, _DB, supplied by the database layer code. Although the code is simple, it’s a good practice to write unit tests for everything. After all, you can’t be sure that things will stay simple. But without having yet written the database layer, how can you test this code?

Of course, it’s likely that I’ll add more methods to this interface later. But if you’re serious about unit testing (and you should be), writing just enough code to test is always a good idea. That way, you’re more likely to write the tests, instead of postponing them until later.

To use this strategy, ensure that the database layer object is passed into the logic layer rather than declared inside it. It’s convenient to provide a constructor to handle this. Note that the constructor is declared with the interface. This allows me to pass in any object that implements that interface:

When the code is in actual production use, I’ll pass in a real database layer object here. For testing, though, I want to use a mock object. So this means building NUnit test code for the SaveDownload and GetDownload methods that use a mock object. Here’s the code:

Running these tests exercises the SaveDownload and GetDownload methods without requiring a real implementation of the database layer (and, in fact, the tests both pass). There’s an additional benefit here as well: Because the tests don’t make any actual database changes, I don’t need to worry about cleaning up the database in between test runs.

Mock objects come in handy in many situations:

But there are also drawbacks to testing with mock objects. In particular, the need to factor out interfaces can make your code more complex. Also, you need to be careful that the mock object behaves exactly like the real object. Otherwise, your test is worthless.

As of this writing, neither of the open-source projects appears to be actively maintained.