Unit testing has been around for a long, long time. It was recognized as an essential part of developing software decades ago. However, in the last few years a new testing technique, test-driven development (TDD), has gained increasing prominence. TDD is one of the practices recommended by advocates of Extreme Programming (usually abbreviated as XP). One excellent introduction to TDD is Kent Beck’s Test-Driven Development: By Example (Addison-Wesley, 2003). Beck boils down TDD to two simple rules:

An example will make the TDD process more clear. Right now, there’s a bit of undone code in the middle of the Engine object:

The intent is clear: When the engine downloads a file, it should fill in the property of the Download object that records the size of that file. To get this working using TDD, I start by writing a new test in the DownloadEngineTests project:

Not surprisingly, the test fails, as shown in Figure 5.4. Note that NUnit assumes that the first argument to the AreEqual method is the expected value and the second is the actual value. 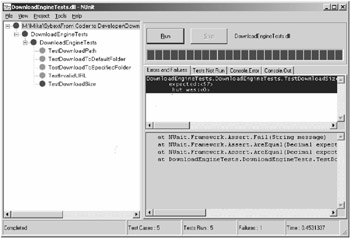 The next step is to make a small change—in fact, the smallest change that will make the test work. It’s important to not get ahead of yourself by writing a bunch of code at once. The goal of TDD is to make certain that all of your code gets tested by writing the tests before the code. The revised GetDownload method with code to fill in the file size:

After making this change, I compile everything, run the tests again—and they all pass. That shows me that not only did I implement the file size code correctly but that I didn’t break anything else in the process. Now I can move on to other tasks.

It’s pretty typical to start writing more code when you commit to TDD. I find that my test harnesses run up to twice as large as the code that they’re testing. Of course, much of the test code is pretty routine; it consists of creating objects, invoking methods, and checking the return values. When I’m heavily into the TDD mindset, I might write a dozen tests for a new method. When I can’t think of anything else to test, then the method is done, and it’s time to go on to something else.

The key that makes TDD work (at least for me) is the discipline of writing the test before writing the code. That’s the only way that I know of to make sure that I really write the tests. Otherwise, they tend to be left until, well, later—and later seldom (if ever) arrives. Writing the tests first means the tests get written. It also means that I think about what I’m building and how it might fail. The delay of writing the tests gives me a little more time to plan and results in better code.

Writing better code is a major benefit of TDD, but it’s not the only one. I find that the most important plus to test-driven development is the sense of confidence that it gives me in my code. It’s difficult to describe this feeling unless you’ve experienced it. By writing many fine-grained tests, and knowing that the code passes those tests, I’m sure that it meets the requirements as embodied in the tests. This is especially critical when new requirements come up that I didn’t think of when I was starting out. Surely you’ve been in the situation where adding a new property required tinkering with code all over the place. Scary, wasn’t it? Well, with TDD, you can banish that fear forever.

The major problem in tinkering with your code is that you might break something unexpectedly. But if you’ve been doing TDD, you will have tiny tests that cover every bit of code you’ve written. In that case, you can make your changes and run your tests. Either they’ll all pass (great!), a few will fail and you’ll figure out how to fix them, or things will be horribly broken— in which case you can toss out your changes and start over (another reason to use source code control!). What you can avoid is the horrible uncertainty of not knowing whether things are broken. That confidence translates into a direct productivity boost.