For users migrating from a non-UNIX “based operating system (such as any Microsoft Windows OS), Linux s organization of files, directories, disk drivers, and other devices takes a little getting used to. Fedora, being a flavor of UNIX, organizes files the UNIX way ”using one grand hierarchy of directories . This section looks at the filesystem hierarchy and how to use the filesystem in your work. (The filesystem is covered in further detail in Chapter 7.)

This simple hierarchy of directories can be represented by the tree diagram shown in Figure 2-19. 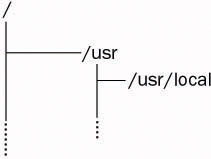 Files within a directory are named much like subdirectories. In fact, behind the scenes a directory is just a special kind of file that contains the names of the files inside it and their respective locations on the disk.

Listing the Contents of a Directory

The ls command takes an argument, which you can use to specify the file or directory to be displayed. If you specify a directory (as we did in the preceding screenshot), the ls command displays the files contained in that directory.

You can see some of the regular directories in the system in the directory tree shown in Figure 2-21.

A moment ago, we used the ls command to list the contents of the root ( / ) directory, and we found 17 subdirectories. Each of these top-level directories has a very specific purpose, and you will encounter some of them very frequently. Let s take a look at some of these directories in the following table, and find out what they re for.

Invoking a Program by Using Its Path

When you launch a terminal, the terminal in turn executes a command interpreter program called the shell . In fact, the command prompt that you see in the terminal is generated by this shell program ”the shell outputs this command prompt, and then waits for you to type in a command. When you launch a program from the prompt, the shell searches for it within the filesystem and then executes it.

You can execute programs by typing out their full path name at the terminal prompt, like this:

Alternatively, you can simply use the program s name, like this:

As you can see, the value of $PATH consists of a number of directories, separated by : characters . If you launch a program by typing only its filename (rather than its full path name), the shell tries to find the program among the directories named in your path.

The value of your $PATH variable depends on what account you re using. By default, Linux discourages normal users from executing certain programs, such as the various administrative programs located in the directories /sbin and /usr/sbin that are intended for execution only by the super user. Linux does this by omitting these directories from any normal user s $PATH (as in the preceding example); users cannot invoke these programs without specifying the full path name.

The whereis command is also useful for locating programs. This command allows you to find the location of programs that are not contained in directories listed in $PATH . In the following example, you can see how which and whereis behave differently:

Here, which is unable to locate the ifconfig program because ifconfig is not located within any of the locations specified by the $PATH . However, whereis locates two files by the name of ifconfig : one ( /sbin/ifconfig ) is the program we re looking for, and the other is the file that contains the pages of the manual that cover ifconfig .

If a program is not within the scope of your PATH environment variable and you do not know where it is located on the system, you can also use the locate command to find the executable file. The caveat is that using locate as a general-purpose file search program can generate lots of information, and the user may have to sift through it to get to the file of interest. For example, if you used locate to find the location of the date command, it would additionally display the man and info pages for date . The details on using locate are explained in a subsequent section in this chapter.

This section helps you navigate the filesystem and all the files in your computer. The filesystem can be navigated using either a GUI file explorer (such as Nautilus) or the terminal. 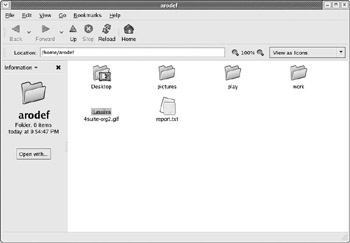 Once it s open, you can type any location into the location bar, and Nautilus displays the contents at that location. Alternatively, you can click the button marked Up to make Nautilus display the contents of the parent directory instead. In this way, you can navigate all the way up to the root directory ( / ), where you will find all the computer s top-level directories. You can then double-click the directories here to navigate inside them.

Overall, the navigation of the filesystem using the file manager is very intuitive, and if you have any experience with a GUI-based operating system such as Windows, you ll find yourself right at home with Nautilus.

Opening up a terminal emulator window places you at the shell prompt, and in your home directory. As already noted, the shell is the program that interprets each of the commands that you type at the terminal.

This example shows the pwd program being used to confirm that the current directory just after opening the terminal application is the user s home directory.

Displaying the Contents of a Directory

To display the contents of a given directory, you can use the ls program that was introduced earlier in the chapter. If the ls program is executed without any arguments, it displays the files in the present working directory.

If you try this in your home directory just after installation (before you ve created any new files in your home directory), the ls program gives no output (to reflect the lack of content in the directory). However, you should note that the ls program s default behavior is to not display the hidden files in a directory. Hidden files are generally used to store user-specific configuration data, and you can usually spot a hidden file because its name begins with the . (dot) character.

The lack of output from the first command suggests that the directory is empty. However, the output from the second command reveals the existence of a number of hidden files.

Two different CLI programs enable you to search for files ” locate and find :

The find program is more powerful because of the wealth of search criteria that it allows in searches. Both of these commands are used to find a file named pam.ps in the following example:

The find and locate commands are explained in more detail in Chapter 7.

Fedora has a separate GUI program for finding files. This program can be executed by selecting the Main Menu>Search for Files option. This opens up the dialog box shown in Figure 2-23. 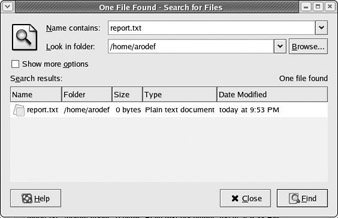 In this dialog box you can specify the name of the file that you want to search for and the path in which the search should be performed. By clicking Find, the Search Tool performs a file search based on these criteria and returns the name and location of any files found in the directory mentioned in this box and in any of its subdirectories. For example, the preceding figure shows an attempt to search for a file named report.txt in any directory under /home/arodef .

The Search Tool also offers more advanced options that allow you to specify more fine- tuned parameters for the search. This mode is selected by clicking the Additional Options caption. You select the options you want from the drop-down list box (shown in Figure 2-24), add them to the list, and then specify the parameter of the restriction. 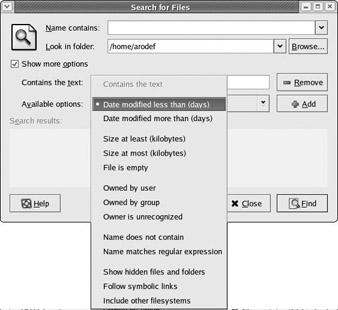 The preceding screenshot shows that one restriction has already been added, stating that we want the search to return only files exceeding 10Kb in size .

Adding Devices to the Filesystem

In Linux, almost every device is treated as a file. This concept might be a bit unusual to you if you re more familiar with other non-UNIX operating systems such as the Windows family, but you ll quickly get used to it.

The idea behind this is to provide a uniform interface to all resources ”whether that resource is a hard disk, a serial device, a floppy disk, the sound card, or even the TV tuner. The notable exceptions in this concept are the network devices, which are handled differently by the operating system.

For users coming from a Windows background, there are some notable differences here. In Linux, the different hard disks and their partitions are not considered different drives. Instead, when you need to use such a device, it is mounted to a directory within the filesystem hierarchy (which is called its mount point ). Mounting a disk drive causes its own filesystem to appear as a child of the directory on which the device is mounted. Then, you can access the disk drive s content by navigating the directory hierarchy, just like any other file in the filesystem.

Thus, when the floppy is mounted, it appears to be joined seamlessly to the filesystem, even though it is an entirely different type of media than the hard disk on which the main filesystem is situated. By convention, you create mount points in the /mnt directory ”for example, you might mount a floppy disk onto /mnt/floppy or a CD-ROM onto /mnt/ cdrom .

Representation of Devices on the System

Every device on the system is represented by a file in the /dev directory. For example:

Only devices that can contain a recognized filesystem are mountable. For example, floppy, CD-ROM, IDE, and SCSI hard disks generally contain filesystems to store their data, and can be mounted onto the computer s filesystem.

The Fedora desktop has an application called magicdev , which detects media in the disk drives and mounts them automatically. Whenever you insert a data CD into the CD-ROM drive, magicdev does the following:

If you were to insert a music CD into the CD-ROM drive, magicdev would automatically launch the CD player and play the first track on the CD, as shown in Figure 2-26.

Once the CD-ROM is mounted, the CD-ROM driver locks it into the drive. You won t be able to eject the disc by pressing the Eject button on the CD-ROM drive. To eject a mounted CD, right-click with your mouse on the CD s desktop shortcut and click the Eject option in the resulting menu, as shown in Figure 2-27. This unmounts the CD from the mount point and ejects the disk. 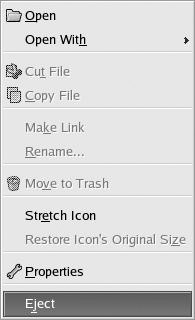 Mounting and Unmounting from the Command Line

You can also perform the tasks of mounting and unmounting from the command line. To mount a CD-ROM onto the filesystem, you can use the mount program. The mount program needs to be told the device that has to be mounted, the filesystem that is present on it, and the mount point (the point in the existing filesystem where the device needs to be mounted). For example, the following command takes the CD contained in the CD-ROM drive /dev/cdrom , and mounts it at the mount point /mnt/cdrom :

Some of the parameters for mounting a CD in a Fedora desktop are preconfigured and stored in the system configuration file /etc/fstab . Therefore, you will need to execute only the following command to mount the CD-ROM on the mount point /mnt/cdrom :

This instructs the mount program to mount the CD-ROM device /dev/cdrom onto the mount point /mnt/cdrom1 . It also specifies the filesystem as iso9660 , which is present on most standard CD-ROM media.

To unmount devices from the filesystem, you execute the umount program. The umount program takes only one parameter ”the mount point of the device. For example, the following command unmounts the CD-ROM disc from its mount point:

Finally, the eject command ejects the CD from the CD-ROM drive.