To empirically prove this model, we surveyed 253 Internet users. The characteristics of the respondents are outlined in Table 1. For interested readers, the research methodology used in this study is detailed in Appendix A, "How Was This Study Conducted," and Appendix B displays the measurement used. The results largely supported our propositions. A schematic representation of the Model of Consumer Acceptance of Virtual Stores that includes the standardized path coefficients is displayed in Figure 2. 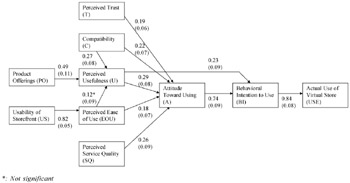 The results suggested that one of the proposed CSFs, information richness, does not positively affect PU. The development of this hypothesis and associated scale was based on IRT, which is a predictive theory to understand users' communication media choices (Daft & Lengel, 1986). However, the criteria for rich communication proposed by IRT were questioned by a number of empirical studies (e.g., Lee, 1994; Markus, 1994). Computer-mediated communications, such as electronic mail, prove to be popular despite the fact that, according to IRT, they provide lean communication instead of rich communication (Lee, 1994). One of the weaknesses of IRT is that it measures information richness solely by the properties of media and ignores the interactions between people and the social context in which the communication occurs. Therefore, the authors suspect that the insignificant linkage between IR and PU is due to the measurement weakness.