We ve discussed troubleshooting techniques throughout this book. Troubleshooting a network is no different. If you have a problem, collect data, identify and isolate the cause, research the symptoms with others, and if none of this works, apply the scientific method.

As noted earlier, the number one cause of network problems is physical: bad connections, cables, power, and so on. Once you ve checked the physical problems, Linux has a number of troubleshooting commands that can help. While the netstat command allows you to collect data, the ping and traceroute commands help you isolate the problem.

This command displays routing tables, proxy connections to outside networks, interface statistics, and more. For example, the netstat -a command displays all available connections. As shown in Figure 21.11, the Local Address column displays names and numbers , which correspond to TCP/IP ports described in earlier chapters. In the Foreign Address column, you can see telnet , http , and ssh connections that are established between the local computer and two others. 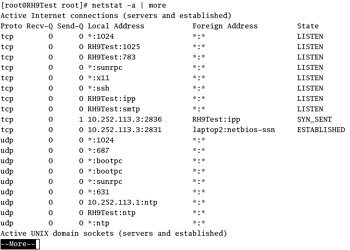 A routing table lists currently configured paths from your computer to another computer on or outside your network. Linux uses these paths to find the computers to which you want to connect. A variation of netstat enables you to inspect your routing tables. We ve shown a fairly simple routing table in Figure 21.12. It includes three different types of IP addresses, as described in Table 21.5.

Checking Connections with ping and traceroute

If you have a specific problem on your network, such as a user who no longer has web or e-mail access, start by talking to the user. Based on your knowledge of browsers and e-mail managers, make sure the user knows how to access the desired service. You may also be able to log onto that user s computer through ssh or telnet and check the user s computer for yourself.

Linux includes a number of tools that allow you to work from the most basic network connection all the way to the connections required for the application. These command tools are based on the ping and traceroute commands. When diagnosing network connections, try the following commands. If they work, you ll need to press Ctrl+C to stop the response: