Red Hat has developed a number of other graphical utilities that can help you with the day-to-day tasks of administering your Linux system. They are in various stages of development; expect improvements as Red Hat releases new packages and later versions of its distribution.

You can use the redhat-config-packages utility to inspect, install, and remove the RPM packages currently on your Linux system. Start it from a GNOME desktop by selecting Main Menu ˜ System Settings ˜ Add/Remove Applications. This opens the Package Management window, shown in Figure 19.24. 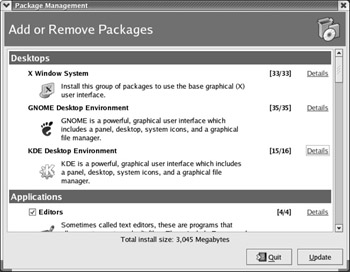 If you installed Red Hat Linux graphically per Chapter 03 , Figure 19.24 should look familiar. It includes the same organization of package groups that you used during the graphical installation process. 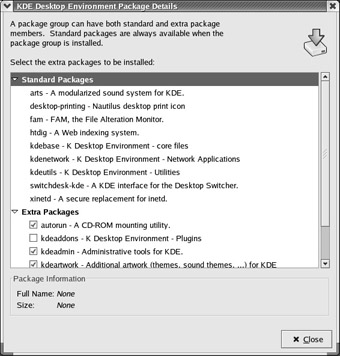 In this way, you can deselect the packages or package groups of your choice. Make any desired changes and click Close. When you click Update in the Package Management window, this utility makes sure that you don t have unsatisfied dependencies. You get a last chance to cancel (see Figure 19.26) before the deselected packages are removed from the system. Click Show Details to review the packages that are to be removed.

Figure 19.26: Before packages are removed

Adding new packages is a bit more complex, because it requires access to the installation RPMs. If you start redhat-config-packages from the command line, this utility will prompt you for CDs.

Linux logs the updated list of installed RPM packages each week in /var/log/rpmpkgs . The original list from when you installed Red Hat Linux is stored in /root/install.log .

The redhat-config-rootpassword utility lets you change the password associated with the root user account. Start it from a GNOME desktop by selecting Main Menu ˜ System Settings ˜ Root Password. If you re not logged in as the root user, you re prompted for the root password, as shown in Figure 19.27.

Figure 19.27: You should have the root password before you can change it. 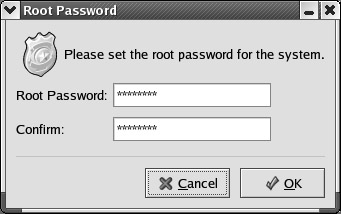 You can use the redhat-config-users utility to manage the users and groups with accounts on your Linux system. More information on the affected configuration files is available in Chapter 09 .

Start it from a GNOME desktop by selecting Main Menu ˜ System Settings ˜ Users and Groups. This opens the Red Hat User Manager window, shown in Figure 19.29. 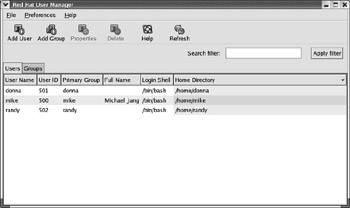 As you can see, this window includes two tabs. The Users tab lists current users on the system, from /etc/passwd . The categories should be familiar if you know this file. To add a user, click Add User. This opens the Create New User dialog box, shown in Figure 19.30. 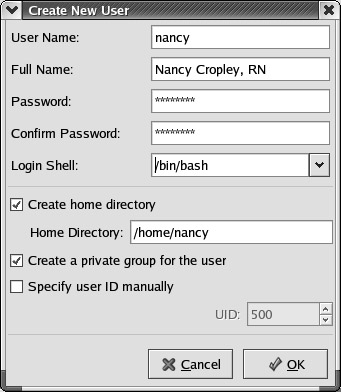 This dialog box allows you to enter the information associated with the new user, along with the password. Normally, the new user gets the next user ID available, in this case, 503. If you activate Specify User ID Manually, you can set the number of your choice.

You can add more account information for each user. Highlight a user and click Properties. This opens the User Properties dialog box, shown in Figure 19.31. 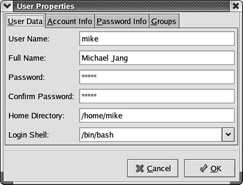 There are four tabs of information within User Properties, which are described in Table 19.5.

Click OK to return to the main Red Hat User Manager window. Next, select the Groups tab, which lists current groups from /etc/group . Click Add Group. This opens the Create New Group dialog box, shown in Figure 19.32. By default, each user is a member of his or her own group, with the same ID number. For example, user donna has a user ID of 501 and group donna has a group ID of 501. This is the User Private Group scheme described in Chapter 09 . 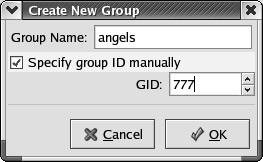 Whenever you create a special group, it s a good idea to give it a number in a different range from your users. I ve created the group named angels. After selecting angels from the Groups tab, I clicked the Properties button, which opens the Group Properties dialog box. On the Group Users tab shown in Figure 19.33, you can add the users of your choice to this new group, in this case, nancy and randy . 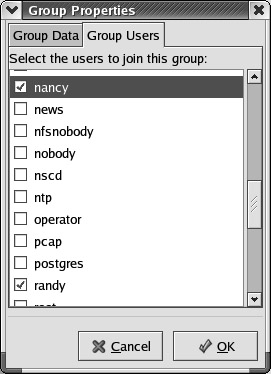 The Red Hat graphical configuration tool is redhat-config-xfree86 , which is described in detail in Chapter 15 . Start it from a GNOME desktop by selecting Main Menu ˜ System Settings ˜ Display. This opens the Display Settings window, shown in Figure 19.34. 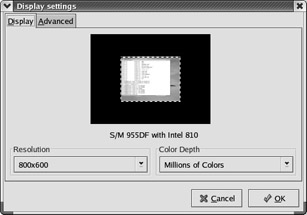 In most cases, you can run redhat-config-xfree86 from a terminal window, even if you didn t choose to install graphical packages during the Red Hat Linux installation process. Once changes are made, you ll be able to see the results in /etc/X11/XF86Config . If you ve used redhat-config-xfree86 before, you ll probably see this comment at the top of that file:

Otherwise, if you ve only configured the X Window during the Red Hat installation process, you ll see this comment instead: 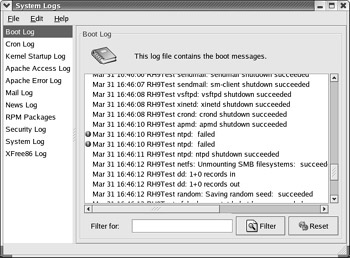 Note the list of logs on the left and a view of the specific log file on the right. You can see right away, from the exclamation point (the alert icon) and failed messages that there might be some problem with ntpd , the Network Time Protocol daemon.

You can use this tool to search for specific messages; enter the search term of your choice and the redhat-logviewer isolates any messages with the search term. You might even realize that this search capability is a function of the grep command.

The redhat-logviewer is configured to review log files from standard locations. If you click Edit ˜ Preferences, that opens the Preferences dialog box, where you can change the file associated with a log, and specify the messages that set off the alert icon.

The standard locations for the redhat-logviewer log files are shown in Table 19.6.

If a log file is missing from the list, you may not have started the service before. For example, if you don t see an Apache Access Log in Figure 19.35, you probably haven t started or accessed the Apache web server on your computer.

There are two similar-looking utilities related to fonts:

Both can help you upload fonts that support printing from GNOME applications. The first utility generates a font map used in printing GNOME-based applications. They update the following font configuration files:

The Red Hat Kickstart configuration tool is redhat-config-kickstart , which is described in detail in Chapter 05 . Start it from a GNOME desktop by selecting Main Menu ˜ System Tools ˜ Kickstart. This opens the Kickstart Configurator window, shown in Figure 19.36. 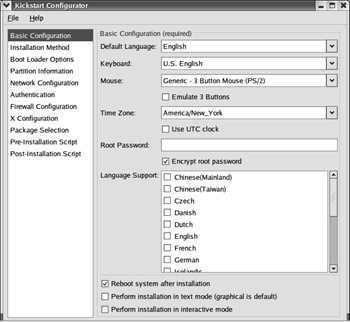 Normally, you should save Kickstart files to ks.cfg; a model Kickstart file based on how you installed Red Hat Linux on the local computer is available at /root/anaconda-ks.cfg .

The Red Hat Firewall configuration tool is redhat-config-securitylevel , which is essentially the same tool that you used during the installation process in Chapter 03 or 4. Start it from a GNOME desktop by selecting Main Menu ˜ System Settings ˜ Security Level. This opens the Security Level Configuration window, shown in Figure 19.37. 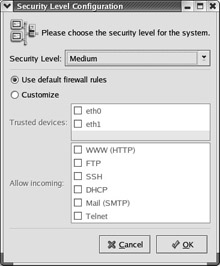 To summarize, you can configure three levels of firewall protection for your computer: high, medium, or none.

You can further customize the firewall. For example, if one of the network cards is connected only to the local network, you may want it to be a trusted device; firewall rules do not apply to traffic through trusted devices. In addition, you can customize the firewall to allow incoming data associated with the protocols shown in the Security Level Configuration window.

If you re using the default iptables firewall command, any changes that you make are written to /etc/sysconfig/iptables . For more information on firewalls and the iptables command, read Chapter 22 .

The redhat-config-securitylevel utility is closely related to the GNOME lokkit firewall wizard, described in Chapter 16 . Both can help you create an iptables -based firewall, using the same basic parameters.

The Red Hat kernel tuning tool is redhat-config-proc , which allows you to modify settings in the /proc directory. Some of the files in this directory are described in greater detail in Chapter 11 . As of this writing, you can only start this utility from a GUI command-line interface; there is no entry in the GNOME Main Menu. Figure 19.38 displays the Kernel Tuning window. 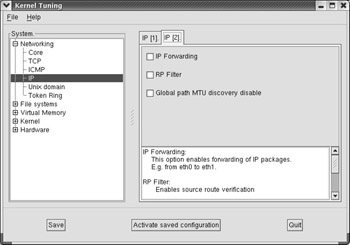 In the setting shown in Figure 19.38, you can enable IP Forwarding, which lets your Linux computer work as a gateway between two or more networks. Changes that you make are written to /etc/sysctl.conf .

The Red Hat tool for setting up username and password databases is authconfig-gtk , which is essentially the same tool that you used during the installation process in Chapter 03 or 4. Start it from a GNOME desktop by selecting Main Menu ˜ System Settings ˜ Authentication. This opens the Authentication Configuration window, shown in Figure 19.39. 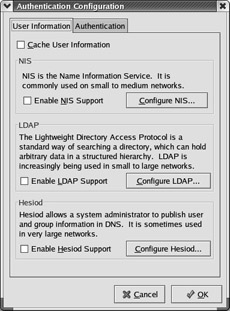 Depending on the type of installation, you may have already set this up during the Red Hat Linux installation process in Chapter 03 or 4 . Since you may be seeing these options for the first time, we ll address them in detail here. First, the settings on the User Information tab are described in Table 19.7.

The settings found on the Authentication tab are shown in Figure 19.40; they include several other configuration options, described in Table 19.8. 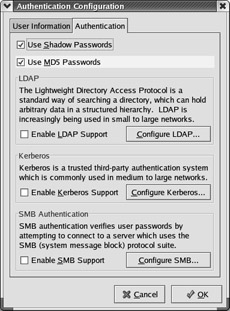 Any changes you make are written to the /etc/sysconfig/authconfig configuration file.

There is a text-mode version of the Authentication Configuration utility, which you start with the authconfig command. It includes two text-mode screens that allow you to enter the same information described in this section.