The KOffice suite includes several applications, built mostly as a series of integrated applications. You can take a brief look at the list in Table 18.13.

One of the KDE drawing programs is known as Karbon14. It includes several basic drawing functions. You can start it by selecting Main Menu ˜ Office ˜ More Office Applications ˜ Karbon14, or by running the karbon command.

As of this writing, the version of Red Hat Linux 9 that I m using includes Karbon14 version 0.0.1, and is thus not ready for production use. It is a work in progress. However, the potential is good, as you can see in Figure 18.10, which is from a later version of Karbon14. It will probably be available if you update the koffice-* RPM package from Red Hat in 2003. 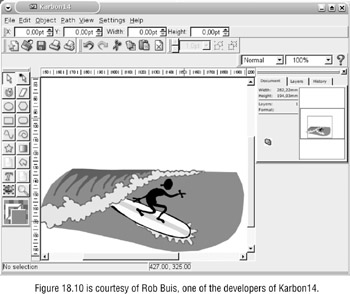 KChart is charting software that primarily is used with KSpread, the KDE spreadsheet application. You can start it by selecting Main Menu ˜ Office ˜ More Office Applications ˜ KChart, or by running the kchart command.

Once you ve created a chart, it s easy to organize data in views such as a pie chart, a graph, or colored areas. Figure 18.11 illustrates a bar chart. 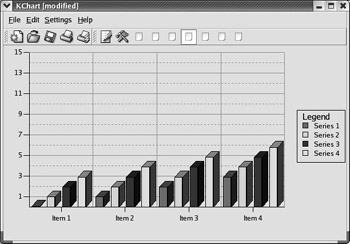 Kivio is the KDE diagram editor. As you d expect, it allows you to draw diagrams. It is similar to the GNOME Dia and Microsoft Visio programs. You can start it by selecting Main Menu ˜ Office ˜ More Office Applications ˜ Kivio, or by running the kivio command.

When you create a presentation, you re essentially creating a slide show. Presentation applications are basically specialized word processors with graphics, and they support a slide show to a large audience in a room or online. You can start KPresenter by selecting Main Menu ˜ Office ˜ More Office Applications ˜ KPresenter, or by running the kpresenter command. 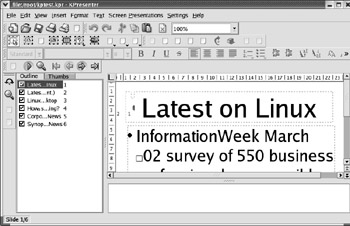 As you can see in the figure, KPresenter includes a wide variety of toolbars, some that allow you to manage color and others that let you draw, manage text, and add objects. The toolbars are described in Table 18.14.

When you first start KPresenter, you ll be able to select from different templates or existing documents. If neither choice works for you, KPresenter can start you with an empty document.

While KPresenter s ability to import files is limited to KPresenter, XML, and PowerPoint files, it can export presentations in a variety of formats, including KWord ( .kwd ), HTML, and RTF.

A spreadsheet lets you define a range of numbers . With the equations of your choice, you can set up a spreadsheet to perform a variety of calculations in various scenarios. It s useful for everything from statistical analysis to business modeling and projections.

You can start it by selecting Main Menu ˜ Office ˜ More Office Applications ˜ KSpread, or by running the kspread command. Figure 18.13 illustrates KSpread and some basic population data from the year 2000 U.S. census. 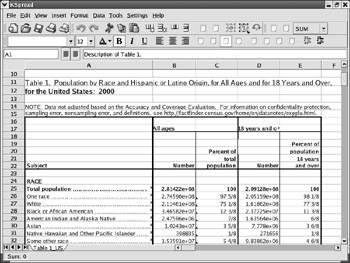 As you can see in the figure, KSpread has the basic look and feel of a spreadsheet. It includes several toolbars, described in Table 18.15.

There are a number of special features used by people in a number of areas that KWord does not handle properly. Nevertheless, KWord is good enough for most applications, businesses, and more. New documents created in KWord can include all of the features that you might find in most Microsoft Word documents.

You can start it by selecting Main Menu ˜ Office ˜ More Office Applications KWord, or by running the kword command. Figure 18.14 illustrates a typical document. 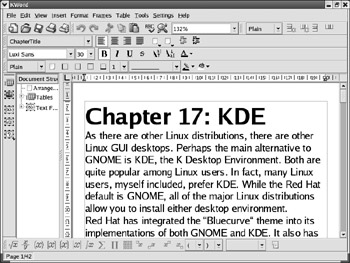 As you can see in the figure, KWord includes five default toolbars: File, Edit, Insert, Paragraph, and Format. KWord can accommodate up to eight different toolbars described in Table 18.17.

KWord works with files from other word processors, including those listed in Table 18.18.

Other KOffice tools of note are accessible through the Main Menu ˜ Office ˜ More Office Applications submenu: