Not all of the tools are addressed here; for example, we covered Galeon and Evolution in Chapter 16 , and we ll look at The GIMP later in this chapter. Not all of these tools are included with the Red Hat Linux 9 packages. For example, while the Agnubis presentation manager is part of the GNOME Office suite, it is still under development and has no official RPM package.

The GNOME word processor is known as AbiWord. It can open and close documents in many formats. Its capabilities are sufficient for most users and applications. Unfortunately, its support of Microsoft Word documents, in my opinion, is not as good as that of OpenOffice Writer. For example, Figure 18.5 illustrates a view of Chapter 16 that was formatted as a table. 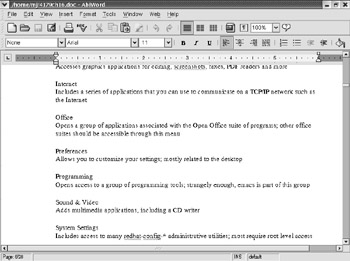 Unlike most OpenOffice applications, you need to select Main Menu ˜ Office ˜ More Office Applications before you can select AbiWord. Or you can start AbiWord with the abiword command in a GUI. This word processor supports a wide variety of formats, as shown in Table 18.11.

Balsa is a standard e-mail manager. Like the other e-mail applications we described in Chapters 16 and 17 , it includes standard views of folders, as well as incoming and outgoing e-mail. Normally, it s set to the local account; Figure 18.6 illustrates incoming e-mail for the root user . 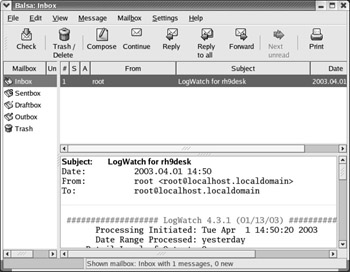 To start Balsa, select Main Menu ˜ Internet ˜ More Internet Applications ˜ Balsa. Alternately, you can start it from a command-line interface in the GUI with the balsa command.

The first time you run Balsa, you re prompted to set up incoming and outgoing settings for an e-mail account. You can configure it later with additional e-mail addresses from the Settings menu. All you need to do is configure a new identity for each account.

Dia, shown in Figure 18.7, is a diagram editor. As suggested by the name , it allows you to draw diagrams. As you can see in the figure, it supports the creation of different kinds of shapes in a diagram, similar to Microsoft Visio. 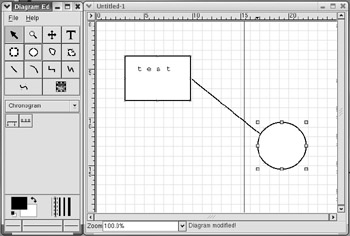 GnuCash is an open source personal finance manager that can help you work with Quicken files.

To start GnuCash, select Main Menu ˜ Office ˜ More Office Applications ˜ GnuCash; or you can start it from a command-line interface in the GUI by using the gnucash command.

The first time you run GnuCash, you ll be prompted to set up a new account for your assets, liabilities, income, and expenses. You can also import files even from Quicken 2002; Figure 18.8 illustrates the import of a simple Quicken test file.

The GNOME spreadsheet application, shown in Figure 18.9, is known as Gnumeric. As with AbiWord, you can start it by selecting Main Menu ˜ Office ˜ More Office Applications ˜ Gnumeric Spreadsheet. Or you can start it from a command-line interface in the GUI with the gnumeric command. This spreadsheet does support a wide variety of formats, as shown in Table 18.12. 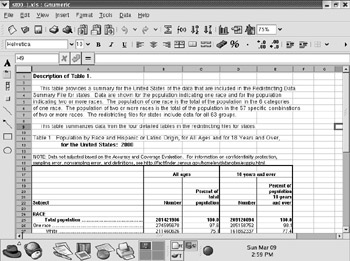 The GNOME project management application is known as MrProject. You can start it by selecting Main Menu ˜ Office ˜ Project Management. Or you can start it from a command-line interface in the GUI with the mrproject command. It includes the basic tools of setting up a project: resource lists, Gantt charts , and task lists. However, it stands on its own; as of this writing, it does not import or export from other project management applications such as Microsoft Project.