A Redundant Array of Independent Disks implies that every disk in a RAID array is physically independent. If one disk fails, the others in the array can take over its functionality. Several versions of RAID exist where Linux can use the other working disk drives to reconstruct the data on any single failed disk drive. One version of RAID includes two separate hard disks with identical information.

You can also include spare hard disks in a RAID array. If there is a failure in any RAID 1 or RAID 5 hard disk, Linux can immediately begin rebuilding the data on the spare disk.

High availability A RAID array always lets you get to your data. With appropriate hardware, you can even change a hard disk while the computer is on. This is not possible with a Red Hat Linux software RAID array.

Fault tolerance With most hardware RAID arrays, the data is always accessible even if one hard disk fails. You can set up fault tolerance in a Red Hat Linux software RAID array, as long as you configure each RAID partition in the array on separate physical hard drives.

You learned to configure a basic RAID array during the Red Hat Linux installation, as discussed in Chapter 03 .

This level of RAID includes two or more drives or partitions, grouped together. When these are separate physical drives, your computer can use the buffers on each drive. This is one way RAID 0 can speed reading and writing to your hard disks.

However, RAID 0 provides no data redundancy. In other words, if any disk or partition in a RAID 0 array fails, you lose all of the data in that array.

The drawback to RAID 1 is that it takes longer to write data to disk. With RAID 1, writes are not complete until the data is written to both disks. The hardware version of RAID 1 is secure but expensive; if you were to implement RAID 1 on all of your computers, you would need to purchase and install twice as many hard disks.

At this level, RAID requires three or more disks. RAID 5 stripes parity information evenly across all disks in the array. If one disk fails, Linux can reconstruct the lost information from the parity data on the remaining disks. Although data retrieval is slower when a RAID 5 disk fails, your system can still run.

If there is a spare hard disk available in a RAID 5 array, Linux immediately begins to write this lost information onto the spare disk.

This level of RAID is generally preferred in most cases. Data integrity is ensured. The space of only one disk is sacrificed to hold the parity information. And performance is good.

The software RAID that you can configure in Red Hat Linux is a bit different from the hardware RAID, because it uses partitions, not separate physical disk drives. If you use RAID on Red Hat Linux, I highly recommend that you avoid using partitions from the same hard disk for any single RAID array. Otherwise, any failure of that hard disk could destroy all data in that RAID array.

Several hardware RAID systems are available, with their own software support for Linux. However, the principles discussed in this chapter work for any version of RAID associated with Red Hat Linux.

Dedicated RAID hardware can help ensure that your data survives any catastrophic physical failure on any single hard disk.

After installation, the standard utility for creating new partitions is fdisk . For more information on the basics of this utility, please refer to Chapter 07 .

To create a RAID array in Red Hat Linux, you need two or more partitions of approximately equal size . If you want your array to survive the failure of any physical hard drive, each of the partitions in a RAID array must be on a separate physical drive. 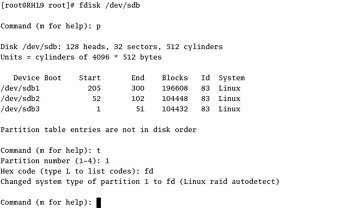 Once you ve created the disks or partitions for your RAID array, you ll need to format them. As discussed in Chapter 07 , you need the mkfs -j partitiondevice command to format your new partition to the ext3 filesystem. For example, the following command properly formats the partition just created:

When you have the RAID partitions that you need, the next step is to edit the RAID configuration file, /etc/raidtab . This file is fairly easy to configure. The following sections illustrate example configurations for RAID 0, RAID 1, and RAID 5 arrays.

There are several commands in /etc/raidtab that you may use for any of these arrays, as shown in Table 14.6.

RAID 0 is disk striping without parity. Because there is no data redundancy, no spare disk partition is configured in this RAID array. The following excerpt from a RAID 0 /etc/raidtab file configures a RAID array of two partitions, /dev/sda1 and /dev/sdb1 , with a fairly large chunk-size (16KB), to maximize data transfer speed:

RAID 1 is known as disk mirroring. Because this is the ultimate in redundancy, one spare disk partition is included in the following excerpt from /etc/raidtab . The two partitions in the array are /dev/sda2 and /dev/sdb2 . The spare partition is /dev/sdc2 .

RAID 5 is known as striping with parity. This can be run with a large number of disks or partitions. Since it provides redundancy, two spare disk partitions are included in the following excerpt from

OK, we re almost there! You ve created the partitions you want in your RAID array. You ve set them to the Linux RAID file type. You ve formatted each partition. You ve set up the configuration for the RAID array in /etc/raidtab . Now you re ready to create and format the RAID device.

For example, take the RAID 5 configuration created in the previous section. The RAID device file is /dev/md2 . You ll want to create the file and then format it. You can then mount the filesystem of your choice on that partition. If you want to have it mounted automatically the next time you boot Linux, you ll also need to incorporate it into /etc/fstab .

The following commands create and then format the RAID device:

At this point, you re ready to mount your new RAID array on the filesystem of your choice. For example, if you want to set up RAID for your home directories, copy all files (including hidden files) from the /home directory to another location, mount your new RAID device on /home , and then restore the files. Assuming /tmphome exists, the following commands work for the /dev/md2 RAID device just created:

Finally, to make the change permanent, label your new device and then add an appropriate entry in /etc/fstab . For the directory and device shown, you first run the e2label /dev/md2 /home command, and then create a new entry such as the following in /etc/fstab :

When you reboot, Linux should automatically mount the /home filesystem on your new RAID device, /dev/md2 .