When you've finished reading this chapter, you'll know the fundamentals of the boot process. When RHEL 5 is properly installed, the BIOS points to the GRUB boot loader, normally on the appropriate master boot record (MBR). GRUB points to and initializes the Linux kernel, which then starts init, the first Linux process. The init process then initializes the system and moves into appropriate runlevels. When Linux boots into a specific runlevel, it starts a series of services. You can customize this process.

While not officially a Red Hat exam prerequisite or requirement, a basic understanding of the BIOS is a fundamental skill for all serious computer users. While many modern computers allow you to boot directly from the media of your choice, such as an RHEL 5 installation CD or a rescue USB key, that may not be possible during your Red Hat exam. Therefore, you need to know how to modify the BIOS menu to boot from the media of your choice.

Both Red Hat (RHCT and RHCE) exams require intimate knowledge of the boot process. If you have problems booting into the default GUI, you need to know how to boot into a different runlevel-and what you can do in key runlevels. From the Red Hat Exam Prep guide, the associated RHCT skill is

When you know GRUB, you can use it to boot RHEL into the runlevel of your choice, which can boot the system into a configuration in which you can address other issues described in this book. When you know how to modify the GRUB boot loader, you can change the way Linux boots on your system.

From the Red Hat Exam Prep guide, the associated RHCE skill is

The focus in this chapter is the boot process, and therefore the boot loader. Problems associated with kernel modules and filesystems are addressed in Chapters 4, 8, and 16.

Because of the variety of BIOS software available, this discussion is general. It's not possible to provide any sort of step-by-step instructions for modifying the wide array of available BIOS menus.

Basics of the BIOS

When you power up a computer successfully, the first thing that starts is the BIOS. Based on settings stored in stable, read-only memory, BIOS performs a series of diagnostics to detect and connect the CPU and key controllers. This is known as the Power On Self Test (POST). If you hear beeps during this process, you may have a hardware problem such as an improperly connected hard drive controller. The BIOS then looks for attached devices such as the graphics card. After the graphics hardware is detected, you may see a screen similar to Figure 3-1, which displays other hardware as detected, tested, and verified. 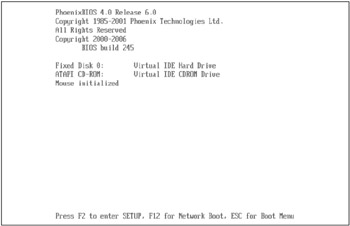 Once complete, the BIOS passes control to the MBR of the boot device, normally the first hard drive. At this point, you should see a boot loader screen.

Generally, the only reason to go into the BIOS menu during the Red Hat exams is to boot from different media, such as a CD, floppy, or USB key. In many cases, you can bypass this process. Return to Figure 3-1. The options for this particular system are shown in the bottom of the screen. In this case, pressing F2 enters SETUP, the BIOS menu; pressing F12 boots directly from a network device; and pressing ESC starts a boot menu. The actual keys may vary on your system.

In many cases, all you see after POST is a blank screen. The BIOS is often configured in this way. In that case, you'll need to do some guessing based on your experience on how to reveal the screen shown in Figure 3-1 and access the boot or BIOS menu.

If you're fortunate, the computer you use on your exam has a boot menu accessible by pressing a key such as ESC, DEL, F2, or F12, with entries similar to:

If you see such a menu, you should be able to select the desired boot device using the arrow and ENTER keys. If that doesn't work, you'll have to use the BIOS menu to boot from the desired drive.

The BIOS and the Boot Loader

As described in Chapter 2, the default boot loader is GRUB, and the first part of it is installed in the MBR of the default drive. Normally, the BIOS should automatically start the boot loader, with a message similar to:

If you're working with an older PC, the BIOS can't find your boot loader unless it's located within the first 1024 cylinders of the hard disk, which is why the /boot partition installed in Chapter 2 is normally a primary partition.

BIOSs overcome this problem with logical block addressing, which is also known as LBA mode. LBA mode reads "logical" values for the cylinder, head, and sector, which allows the BIOS to "see" a larger disk drive.

However, I believe most computers used for the Red Hat exams have only one hard drive. This saves costs for the exam site and means you probably won't have to worry about which hard drive contains the /boot directory.