The standard boot loader associated with Red Hat Enterprise Linux (RHEL) is GRUB, the GRand Unified Boot loader. LILO, the Linux Loader, is no longer supported. As suggested by the Red Hat exam requirements, for the RHCT exam, you need to know how to use the GRUB menu to boot into different runlevels, and diagnose and correct boot failures arising from boot loader errors.

Red Hat has implemented GRUB as the only boot loader for its Linux distributions. When you start your computer, your BIOS looks for the /boot directory and finds the GRUB menu, which will look similar to Figure 3-2. If you've configured your computer with multiple operating systems, you can use the GRUB menu to boot any operating system detected during the Linux installation process. 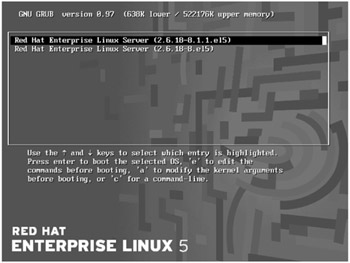 If you need to do something special with GRUB, you can edit the commands. If GRUB is password protected, you'll need to start with the p command. Use the e command to temporarily edit the file. You'll see a number of basic commands that you can use to modify GRUB, as shown in Figure 3-3 and Table 3-1. You can use these commands to test different GRUB configurations. They can help you troubleshoot problems with the GRUB configuration file, without booting, editing, and rebooting your system. That could possibly help you save time during the Troubleshooting exam. But once you find the solution, make sure to record the change in the GRUB configuration file, /boot/grub/grub.conf. 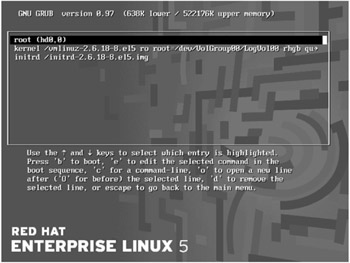 If you're troubleshooting GRUB, the GRUB menu can help you experiment with changes quickly. However, if you find the solution in this way, you'll still need to change (and test) the GRUB configuration file, /boot/grub/grub.conf.

If you find a problem with GRUB during the Troubleshooting and System Maintenance part of your exam and are unsure about the solution, testing changes through the GRUB menu could save you time. However, until you record the change in the GRUB configuration file (which requires that you boot Linux into some runlevel), you won't get credit for the work that you've done.

You can also use GRUB to boot other operating systems, including various versions of Microsoft Windows, as shown in Figure 3-3.

To pass a parameter to GRUB, type the a command in the first GRUB menu. This allows you to append the command sent to the kernel. After typing the a command, you might see a command line similar to the following:

If you're going to diagnose GRUB problems, you need to know how GRUB works. The best place to start is with a typical GRUB configuration file.

As you can see, even the comments are significant. The first line suggests that this file was created by Anaconda, the RHEL installation program. The next line notes that changes do not have to be written to the MBR; this file is automatically linked to the GRUB pointer that is probably already installed in the MBR.

The commented "Notice" in the configuration file appears if you have created a separate partition for the /boot directory. Now this is really weird-there are two definitions for the word root in this file. First, the /boot directory in the GRUB configuration file is associated with root, in this case, root(hd0,4). But the actual Linux top-level root directory is associated with a different partition, as defined by this comment:

The last commented line indicates the hard drive with the MBR-in this case, /dev/sda. Now examine the actual commands in this file:

The default=0 directive points to the first stanza. In other words, based on the remaining commands in this file, GRUB boots RHEL 5 by default. If you changed this to default=1, GRUB would boot the second stanza (in this case, Windows XP Professional) by default.

The timeout=5 directive specifies the time, in seconds, before GRUB automatically boots the default operating system. The splashimage directive locates the graphical GRUB screen you see in Figure 3-3. In this case, you can find it on the fifth partition of the first hard drive, in the /grub/splash.xpm.gz file. As (hd0,4) has been previously defined as the /boot directory, you can find the splash screen file in /boot/grub/splash.xpm.gz. The hiddenmenu directive means that the GRUB options are hidden, with the message shown here:

The password --md5 directive specifies a password, hashed to the MD5 (Message-Digest algorithm 5) format, which protects GRUB from modification during the boot process. As described earlier, when you see the GRUB menu, you can enter the password after pressing p. If you want to create your own MD5 password for this file, run the grub-md5-crypt command. You'll be prompted for a password that is converted to an MD5 hash. You can then copy this hash to the GRUB configuration file.

Each of the next two stanzas has a title normally associated with the operating system, such as:

This is a standard, based on the currently installed kernel. If you've configured more than one kernel, you'll probably see more than one stanza. Both would boot RHEL 5, using a different kernel.

The next three lines specify the location of the /boot directory, the kernel, and the initial RAM disk, respectively:

In this case, the /boot directory, as described earlier, is on the fifth partition of the first hard drive, as specified by root (hd0,4). The kernel is specified by the vmlinuz-2.6.18-1.EL file, which you can find in the /boot directory. It's opened as read only (ro) to protect it from any accidental writes from the initial RAM disk; the actual top-level root directory is associated with the / label (root=LABEL=/). Finally, the rhgb quiet directive hides the boot messages by default.

You may see other directives on this line, such as selinux=0, which disables Security Enhanced Linux (SELinux). But remember, SELinux is now part of the RHCE exam requirements.

The final three lines are trivial with respect to the Red Hat exams; however, many users see them when they configure their computers in a dual-boot with Microsoft Windows. In most cases, you'll actually see the first line as:

I've modified it to specify the actual operating system on the other partition. In this case, Microsoft Windows XP is installed on the first partition on the first hard drive, as specified by:

This is different from the aforementioned root (hd0,4) directive, as rootnoverify does not attempt to mount the noted partition in a Linux fashion.

Finally, the chainloader +1 directive points to the first sector of the noted partition, where Microsoft Windows continues the boot process:

Now that you've analyzed the GRUB configuration file, you can probably visualize some of the effects of errors in this file. If some of the filenames or partitions are wrong, GRUB won't be able to find critical files such as the Linux kernel. Here's an example of the error you'll see if the root (hd0,4) directive points to something other than the /boot directory:

If the GRUB configuration file is completely missing, you'll see a prompt similar to this:

You'll see more of these issues in Chapter 16.

If you make a mistake during the process, you'll have to refer to the techniques described in Chapter 16 to rescue the system from the backup grub.conf that you created. However, the steps used here should make no permanent changes in grub .conf. All you need to do to restore the original settings is reboot your system.

In this exercise, you'll use the printout of the GRUB configuration file from Exercise 3-1 to boot RHEL 5 manually. Look at the printout and identify the desired commands in the stanza. Now follow these steps:

If you see a GRUB command line, you may feel lost. To see a list of available commands, press the TAB key at the grub> prompt.

Some trial and error may be required. You should be able to find all detected hard drives on a standard PC from the BIOS menu (SCSI drives can be a different story). Assuming you have just one, you can use the find command to identify the partition with the GRUB configuration file. For example, to find grub.conf on this particular system, start with the following command:

This returns an "Error 15: File not found" error message. Repeat this process with the other partitions on this drive,

and so on, until you see output associated with your partition, such as:

In this case, the /boot directory is on the fifth partition on the first hard drive. Just to confirm, use the cat command to read the contents of the GRUB configuration file:

Note that a shortcut is available. From the grub> command line, look for the stage1 boot loader file. The command is simple:

If the stage1 boot loader file is still there, you'll see output specifying the partition with the /boot directory, such as:

But wait, it can be even simpler. Just run root at the grub> command line:

Command completion works from the GRUB command line. For example, if you don't remember the name of the Kernel file, type kernel / and then press the TAB key to review the available files in the /boot directory.