Although Active Directory is a reliable entity, there may come times when, for one reason or another, one or more of the Operations Masters fails. For example, let's say that DC03, our current schema master, goes down, with absolutely no chance of recovery ( Note: this scenario should never happen, as any good administrator should have a backup and recovery plan. We talk more on this in the next chapter ). If this is the case, Active Directory gives an administrator the ability to literally seize an Operations Master role from a dead domain controller and assign it to a different domain controller. This is accomplished using the ntdsutil command line utility. Keep in mind that seizing an Operations Master role is a last resort tactic, and should be performed only if the dead Operations Master will never be brought back into the domain . In other words, if you can transfer the Operations Master roles using the traditional means outlined in the previous tutorials, then do so. If not, then use a seizure strategy.

Let's say that DC03, the current forest schema master, has failed, and is completely beyond repair. Let's also say that we have verified this using the previously described repadmin and dcdiag tools . We want to seize the role from the dead DC03 domain controller and reassign it to DC01.

Up to this point, we have learned how domains trust one another, and the process of granting access from one group of users in one domain to resources in another domain. But what happens if we create an entirely new forest (a group of domains with its own schema, Global Catalog, and site/replication settings)? Several factors must come into play if two forests are to communicate:

The first three items are rather self-explanatory. The last two require a bit more discussion. First of all, what is the domain functional level ? Simply put, the domain functional level is a mode which governs what domains can and cannot do. For example, the domains in our forest are running in the default Windows 2000 mixed mode . This mode is a kind of compromise, giving us a good balance of compatibility and features. It offers the broadest level of compatibility with Microsoft's server operating systems, old to new: Windows NT, Windows 2000, and Windows Server 2003. But to attain this compatibility, we lose some functionality. For example, recall that when we shared resources across domains, we were able to nest a global group inside a domain local group. As we shall see later in the chapter, this type of group nesting is not enough for proper sharing of resources across forests. We must be able to add global groups to universal groups, and then add those universal groups to domain local groups. This kind of functionality is simply not possible in the Windows 2000 Mixed domain functional level (as a matter of fact, universal groups are not even an option in the current mixed mode).

The last point, a common DNS thread, is very important. For example, all the domain controllers that we have configured in guinea.pig are replicating DNS data to and from one another. In turn , all clients that join the domain must use one of these DNS servers in order to even resolve the name "guinea.pig." When we add a second forest to the mix, with its own set of DNS values and settings, how are clients in one forest going to resolve names in another forest when the two forests are using different DNS servers? One way to solve this problem is to set up DNS forwarding between the two forests. Figure 5-5 helps explain this further: 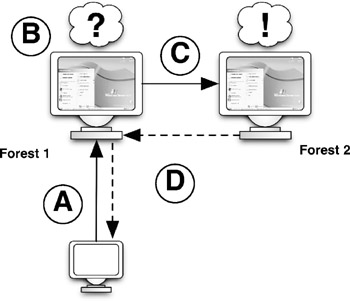