The easiest way to begin creating an API application in Delphi is to create a console application project and then make the following changes to the generated source code:

The following listing shows how to display a message box using the MessageBox function. Figure 23-1 shows how the API application looks at run time.

Now it's time to create a real API application by doing the following:

Windows are, at the API level, created with a call to the CreateWindow or the CreateWindowEx function. Window creation with these functions is very simple if you're creating child windows like buttons, list boxes, or other, already registered, window classes. But when you're creating the main window, you have to do the following:

Defining and Registering the Window Class

The style field is used to define the class's style. The constants that can be assigned to this field start with CS_. In the Windows unit, there are several of these constants, but you'll most often want to use CS_VREDRAW and CS_HREDRAW, which cause the window to be repainted when its size is updated. There are also three more pretty interesting, and sometimes useful, constants: CS_DBLCLKS, CS_NOCLOSE, and CS_DROPSHADOW. The CS_DBLCLKS constant enables the window to process double clicks; the CS_NOCLOSE constant disables the Close button on the window's title bar, the Close option on the window's menu, and the Alt+F4 shortcut; and the CS_DROPSHADOW constant displays the shadow under the window (note that the application will fail to run on Windows 98 if you use the CS_DROPSHADOW style). If you want to assign several styles to the window class, combine them with the Boolean or operator. Here's the code so far:

The next two fields can be used to allocate extra bytes in the window class. Since this is rarely done, feel free to set both of these fields to 0:

The hInstance field needs to point to the application instance. You only have to assign the global HInstance variable to this field and you're done:

The hIcon field specifies the window's icon. If you set this value to 0, the operating system displays the default icon. You can also assign a custom or a standard icon to the window by using the LoadIcon function:

To load a standard system icon, pass 0 as the hInstance parameter and pass one of the IDI_ constants as the lpIconName parameter:

The hCursor field defines the mouse cursor that will be displayed when the mouse is over the window. To assign a standard cursor to the window, you need to call the LoadCursor function, pass 0 as the hInstance parameter, and pass one of the IDC_ constants as the second parameter. The following line loads the standard arrow cursor:

The operating system also has several stock brushes that you can use here. To do so, you have to call the GetStockObject function and pass the appropriate constant, such as WHITE_BRUSH or BLACK_BRUSH:

Finally, to completely define the window class, you have to assign a class name to the lpszClassName field. Because we're going to use the same class name in the call to CreateWindow, it's best to create a constant for the class name. The class name can be anything you like, but you should at least try to give it a name that's somewhat related to the application you're creating:

Creating and Displaying the Main Window

Here's the declaration of the CreateWindow function:

And here's what you have to do when you're calling the CreateWindow function to create the window:

If you run the application now, you'll see the main window for a moment before the application closes and produces a memory leak (because we haven't yet written any code that destroys the main window). To create a completely functional API application, we still have to do two more things: create and enter the message loop, and fully implement the window procedure.

To create the message loop, you have to declare a variable of type TMsg to store the received message and then write the following while loop:

Now that you've seen all the pieces that make up an API application, it's time to see the complete code for the API application. The source code is displayed in Listing 23-2.

Listing 23-2: The simple API application that only displays the main window

The API application is displayed in Figure 23-2. 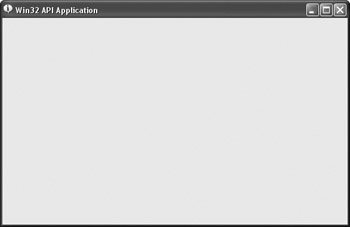