You can animate text on a text layer, character by character if you want. To do so, you will have to add new items to the Timeline. These items are called Animator Groups, Properties and Selectors.

Properties are the specific aspects you can animate. For instance, if you want each letter in the word cat to, in turn , grow bigger, then smaller (cat, cat, cat, cat, cat), you need to add a Scale property.

Selectors constrain your property animations to particular characters within a text later. For instance, if you want to animate the scale of only the P's in the word "hippo," you need to add a Selector that isolates them from the rest of the word (hippo). 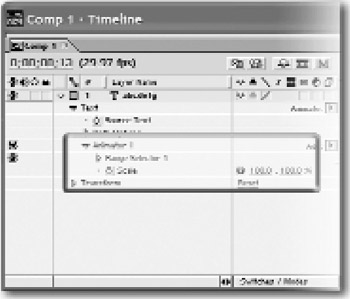