Working in .NET framework and ASP.NET means you will interact with many objects. We're not covering every object available because that would take a couple of books. However, we are going to hit on the most common that you'll be using in ASP.NET. By now you should be familiar with the Response and Request objects, which are used in all the programming environments that are available to Dreamweaver MX and which are covered in Part III of this book. Because most of the ASP.NET objects are similar to the ASP objects covered in the Chapter 13, we are not going to review each in detail. In this section, we'll review the Response, Request, and Page objects. Finally we'll cover the global.aspx file for session and application management.

You may be somewhat familiar with the Response.write command from traditional ASP. However, as we've mentioned, ASP.NET expects a whole new web page structure. Remember, logic is typically placed at the top of the page, leaving the rest for the user interface. As you can see in our example in Listing 14.6 and the result in Figure 14.9, we've placed the Response.write command in the Page_Load event. 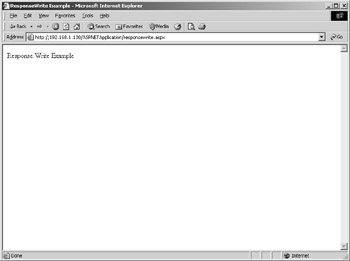 Figure 14.9: Viewing the output from ResponseWrite.aspx in Internet Explorer

As the web server compiles your ASP.NET script file and generates the header and date of the Response object, that data is usually held in a temporary buffer until all the script processes are complete. However, you can turn this buffer off or on using Response.buffer. To disable the buffer, insert Response.buffer = FALSE into the Page_Load event of your ASP.NET script file as shown in Listing 14.7.

You use the Response.redirect command to send a user to a different URL without their knowledge. As we demonstrated in Chapter 12, a typical implementation of Response.redirect is to protect a page with a login procedure. As you may recall, the concept is to look for a passed form field and compare the value to an authorized login. If the login values do not match, the script redirects the user to another web page. You'll notice that the ASP.NET implementation of the PageSecurity script shown in Listing 14.8 is similar to the ASP version. However, the ASP.NET code is encapsulated in the Page_Load event. In short, the Page_Load event checks for a submitted form field called Name. If Name has not been submitted, Page_Load redirects the user to HelloWorld-VB.aspx. If Name does exist, Page_Load compares the submitted value of Name to the appropriate password "admin". If the value of Name does not equal the appropriate password, Page_Load redirects the user to HelloWorld-VB.aspx. If the value of Name does match the password, the rest of the current PageSecurity.aspx page loads and the user can see the content.

The Request object receives content from the browser. It does so in the form of collections of variables that encapsulate the data for each request. There are several Request collections-Request.Form, Request.Querystring, and Request.ServerVariables.

When a form using the Post submission method is submitted to the current ASPX page, the collection of submitted form values is available through the Request.Form command. For example, to reference the submitted form value of a text box named FirstName, use the following command:

Request.Querystring is a collection of value pairs passed in the URL address to an ASPX page. For example, when a page passes a variable and value through a URL address such ashttp://www.sybex.com? FirstName =Bryanthe collection of passed form values is available to you through the Request.Querystring command. In addition to passing variables through the URL, you can also use the Get form submission method to pass value pairs of variables and values to a ASPX page. To reference the FirstName variable passed through the URL string in this example, you use this syntax:

Request.Form and Request.Querystring are useful collections carried over from traditional ASP. However, in contrast to traditional ASP, you will find you can accomplish most of the functionality of these collections with web server controls.

You can reference every ASPX page through the Page object. In addition, the Page object has several features and events you will find yourself using often. In fact, we've already used one of the events in several of our examples-Page_Load. Using the Page_Load event, we can direct ASP.NET to execute code as the page loads but before it renders HTML. This event is the perfect time to execute functionality such as authenticating users or redirecting users to established data connections. 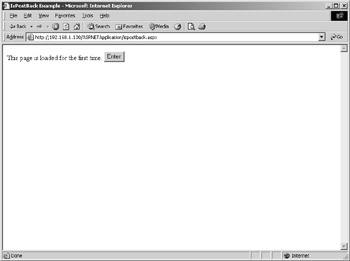 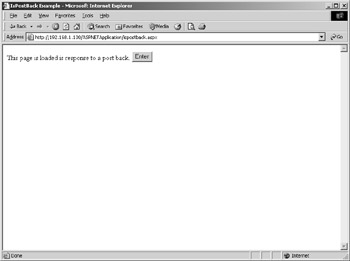