The Servlet 2.3 specification, consistent with J2EE philosophy, prescribes a model that separates the developers from the deployers of a web application:

Developers will not know ahead of time the specific users that may be using the application but there are many situations in which access to web resources must be partitioned depending on the users involved. For example, if Jane and Jill are peers in the same department, they should not be able to access each other's salary information Accordingly, developers need to be able to build security into the web applications without referring to the actual users who may use the application. The deployer understands the relationships in the deployment environment and so should decide who can access what.

We need to be able to map names to the final users and security principals. These mappable textual names are called roles. For example: 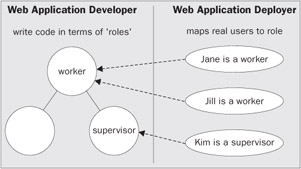 Roles serve as an indirect mapping to users and security principals in the deployed environment.

Roles isolate developers from changes in the physical deployment. For example, a web application developer need only write code that will prevent one worker from accessing another's salary record. The fact that Jane and Jill both map to the role of a worker is not of concern to the developer. The decision to map Jane and Jill to worker is the responsibility of the deployer. We can envision a real life scenario in which Jane gets a promotion and therefore requires a supervisor role. In this case, Jane will be able to access the salary information of Jill because the web application developer has written the code to allow a supervisor role to access the information belonging to a worker.

The fact that a supervisor can access worker's salary records is a business rule. The Servlet 2.3 specification provides mechanisms that make it possible (and easy) to code such business security logic without the need to implement a security infrastructure of our own. The combination of all the business security rules that are implemented in a web application is referred to as the web application's security model.

The Servlet 2.3 specification describes two ways that containers can help in implementing an application's security model. The indirect mapping offered by roles is essential in enabling both:

The Servlet 2.3 specification is careful to avoid platform-specific features. This presents an interesting challenge for Tomcat, a product that is expected to run well across a variety of OS and systems. While the Servlet 2.3 specification describes features in generic terms, the designers of Tomcat 4 must actually ensure that the features work on different platforms.

The Tomcat solution is illustrated in the following figure: 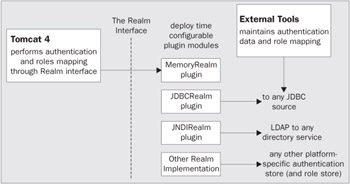 Users to roles mappings are maintained through realms. In programmatic terms, a realm is nothing more than a programming interface. By specifying this interface, and not dictating the means by which this mapping is done, Tomcat can be adapted for new platforms. New means of authentication and roles mapping tracking can be accommodated via the creation of a new realms component, or access can be provided through standard data access interfaces such as JDBC.

By factoring out the means of authenticating a user, and retrieving the role mapping to a user, Tomcat is able to participate in server managed security without being tied down to any specific operating system and or platform implementation.

The programming interface that Tomcat requires every implementation of a realm to support is called org.apache.catalina.Realm. This interface defines the following methods:

This adds a listener to monitor property changes in the realm.

These methods are used to authenticate users and principals using simple credentials, password, RFC 2096, or chains of X.509 certs.

This method returns the container that the realm is operating under.

This method returns implementation specific information, including a version number.

We can use this method to determine if a principal has a certain role within this realm.

This method is used to remove a previously registered listener for the realm.

This method sets the container associated with this realm.

The operational model of realms is quite straightforward. On the first access by a user of any declaratively protected resource, the applicable realm's authenticate() method is called. The user's password and roles are then cached by Tomcat for the duration of the session. This means that any database changes will not be visible until the next time authenticate() is called.

While Tomcat provides a means to access realm information for authentication and role query, it does not provide any way of creating and maintaining the information store.

By default an in-memory realm based on an XML file will be used. This base realm is only loaded at Tomcat startup. The static nature of this in-memory realm means that it is only really useful for testing purposes.

Tomcat provides an implementation of a JDBCRealm for use in production systems. A JDBCRealm will access any JDBC source to obtain user-to-roles mapping information. User authentication and role information can be stored in any information store that provides JDBC access.

In an application-hosting environment, we might want to have various levels of administrative users. Some owners may be granted control over certain web applications, others over a complete virtual server. A system-level user may want to have system wide access to some resources, across all virtual hosts, and across all the web applications running within the same engine instance. Realms in Tomcat 4 can be configured to fulfill all of these requirements.

A realm can be defined and associated within the server configuration file (server.xml) with a <Context>, <Host>, or <Engine> element:

Now that we have the authentication database and roles mapping, we need to put protection on some resources. The Servlet 2.3 specification defines two new elements in the deployment descriptor to support this declarative security mechanism. They are <security-constraint> and <login-config>:

Under container-managed security, a J2EE application builder can specify security constraint and role mapping purely using GUI tools and have the container implement the actual access control. The GUI configuration process is the declarative means by which the application deployed can give instructions to the container on how to managed security. While GUI based security administration tools exist for many commercial products, servlet containers are not required to implement them in any standard manner. The Servlet 2.3 specification is the first revision to formalize this as a requirement for every compliant container.

Let's take a look at the sub-elements of a <security-constraint> element:

The <login-config> element specifies the authentication method to be used within an application when the container attempts to authenticate a user. Let's take a look at the sub-elements of <login-config>.

Even though BASIC and FORM-based authentication are not intrinsically strong methods of authentication, they can be made strong by deploying them over a secured transport such as SSL. We can use X.509 client-side certificates to perform client authentication. The server can authenticate a cert passed by the client by:

The latest versions of Internet Explorer and Netscape both support this feature.