You should notice the images to the left of the stage. You will be working with them shortly, but first let's look at the parameters in the Concentration Game component. Select the component and open the Component Parameters panel. Click on the Next Page button to go to the second page (see Figure 9.9). 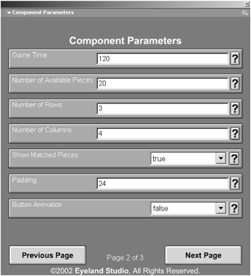 Figure 9.9: The Component Parameters panel for the Concentration Game component

Number Of Available Pieces The Number Of Available Pieces parameter specifies the potential number of pairs the game has to draw from. This parameter is a little difficult to understand, so let's use an example. Let's say you have specified 4 rows and 5 columns. This means that there will be 10 matching pairs because 5 times 4 equals 20, and 20 divided by 2 equals 10. However, let's say you've created 15 object pairs. This means that you have up to 15 object pairs from which the game could randomly choose 10.

In the example above, you would want to enter 30 (15 times 2) for the Number Of Available Pieces parameter. The concentration game engine would then know that there are up to 15 possible objects that it can use for the 10 available matches for the game. Thus this parameter allows you to create a slightly more variable and interesting game because the game will not always use the exact same objects each time.

Number Of Rows, Number Of Columns These establish the number of rows and columns for the objects and buttons. The number of rows times the number of columns must equal an even number. For example, 3 rows and 3 columns will not work because the nature of the game is that the player must match two objects, and, of course, 3 time 3 equals 9. This means there would be one extra piece, making it impossible for a player to win.

If you want to hide an image below the objects/buttons like in the classic Concentration game, use a Padding value of 0 and set the Show Matched Pieces parameter to False. This forces the objects and buttons to cover any image you have in the background. When the player makes a match, the objects will disappear and reveal the background image through the vacant spaces.

Button Animation The Button Animation parameter establishes whether or not the button will play some animation when revealing the objects underneath. There are only two options: True or False. True displays any animation in the Button movie clip when you click it. You will need to set the Button movie clip with an animation after the first frame. The animation must end with nothing showing so that the object can be seen. A value of False causes the object to be displayed immediately after you click on the button.

Now let's modify a few parameters and start to customize the game a little. Follow these steps: