Loom as an Adventure Game

For all of its strengths, Loom is still an adventure game, and indeed a fairly linear one. Adventure games are the genre of computer games most concerned with traditional storytelling, while at the same time often being the least encouraging of player creativity. The story being told in an adventure game is the designer s story, one that was clearly established ahead of time and one that allows players only to experience it without really being able to change its outcome. The critics of adventure games are quick to point out that, really, adventure games are not games at all, but merely a series of puzzles strung together with bits of story between them. The puzzles, regardless of their form, serve as locked doors between the different parts of the story, and in order to experience the rest of the story, players must unlock that door by completing the puzzle. Games, they say, are required to react to players, while a puzzle provides a more static challenge, one that, once solved , is not nearly as much fun to try again. These critics suggest that once the story is experienced , because of its static nature it is hardly worth experiencing again. 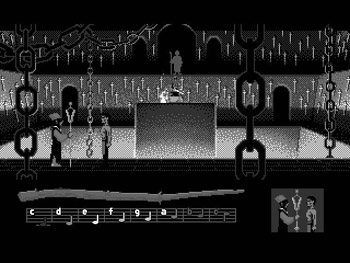 Loom s gameplay centers on the player solving simple yet elegant puzzles. Once solved, the puzzles do not provide much replay value.

And Loom , for all its beauty and strength of design, still succumbs to some of the problems of adventure games. During the conversation cut-scenes, the game is completely linear and players have no control of the game whatsoever. This might be more acceptable in smaller doses, but some of the cut-scenes in Loom go on for a significant amount of time. The game can also sometimes degrade into players trying to click everything on the screen, just to see which objects can be manipulated. There is a good chance that, if an object can be manipulated, players will need to do something with it to complete the game. This is both good and bad: good in that it limits players actions to useful ones instead of leading them down a false path after red herrings and pointless diversions ; bad in that it severely limits the interactiveness of the world. And sometimes the game s landscape art is drawn in such a way that it is difficult to figure out where Bobbin can navigate and where he cannot.

But, truly, these are minor complaints. Is it so bad that Loom is a storytelling experience with a predetermined story? The game is only as worthwhile to play again as it is to read a book or see a movie a second time. Of course, repeat reading and viewing is something many people enjoy, if the work is good enough to warrant it. Loom may not be as interactive as Civilization , but does every game need to be that interactive? A game of Civilization may tell an interesting story of the rise of an empire and the advancement of technology, but to me there has never been a game of Civilization with a story as compelling and touching as Loom s. Critics might ask, why not tell Loom s story as a book or an animated feature? Sure, the story could work in those forms, but would players be so drawn in as when they are allowed to explore and interact with the story-world in question? Through an adventure game like Loom , players gain a certain emotional attachment to and involvement in the events that transpire that is impossible in other media. Perhaps it is not a game by an exclusionary definition, but that does not make it any less worthwhile.