Because being an open relay has potentially bad consequences, the best approach is to not be one. You can accomplish this goal in several ways: disallowing relaying completely, allowing relaying only for specified domains or IP addresses, accepting relay requests only from hosts with particular IP addresses, or requiring authentication from the sender before accepting a message for relay. Microsoft Exchange 2000 supports all these methods. Even better news is that by default Exchange 2000 allows only authenticated senders to relay. However, for reasons discussed earlier you might need to turn relaying back on (at least some of the time).

Remember that the relaying settings apply to individual SMTP virtual servers and connectors. There is no built-in way to apply and enforce relaying settings on multiple servers at the same time. Each server’s configuration is stored in the Internet Information Services (IIS) metabase on the local machine, so you can’t apply these settings using Group Policy or Exchange system policies. Because most organizations with multiple servers concentrate their SMTP message flow through a small number of bridgeheads or front-end servers, this situation isn’t as dire as it sounds. The individualized nature of relaying settings is worth remembering, though, because if you leave even a single open relay accessible to the Internet, spammers are sure to find it.

You control relaying settings through the SMTP virtual server Properties dialog box. The Access tab (shown in Figure 8-2) has three buttons of interest for relaying control. The Authentication button lets you control what types of authentication are required for a successful connection; with the Connection button, you can allow or deny specified IP addresses or DNS domains to connect; and the Relay button allows you to control who can relay mail through your server. (The Certificate and Communication buttons, which are used to turn on and manage Secure Sockets Layer/Transport Layer Security [SSL/TLS] for SMTP, are discussed in Chapter 11, “Securing Internet Communications.”) 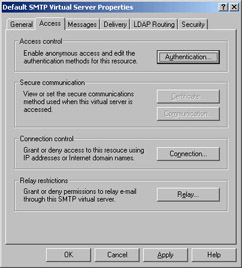 The SMTP server follows a fairly straightforward process for deciding whether or not to accept an inbound message for relaying. Figure 8-3 presents a flowchart that illustrates how this process works: 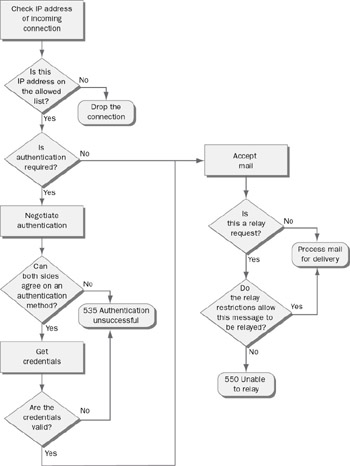 By default, SMTP is an unauthenticated protocol: every SMTP server on the market ships with default settings that allow it to accept anonymous connections. This arrangement is fundamental to the way Internet e-mail works. A public SMTP server may receive mail from any other SMTP server on the Internet; if your server requires authentication, a sender whose server cannot authenticate cannot deliver mail to you. However, there are circumstances when requiring authentication is appropriate. For example, let’s say you want only your remote users to relay traffic through a specific SMTP server. One way to handle this is to create a new relaying- only SMTP virtual server for your mobile users and set it to require authentication.

Clicking the Access tab’s Authentication button opens the Authentication dialog box (see Figure 8-4). From this dialog box, you can require your SMTP server to use any combination of the three basic authentication levels Exchange supports. Its three check boxes allow you to specify which of these methods your server will accept. 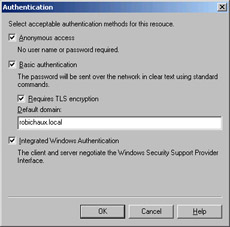 Figure 8-4: Setting authentication properties on the SMTP virtual server is one way to control who can relay through it.

Remember that the Authentication dialog box just controls who can connect to your server in the first place. An authenticated (or anonymous) user who successfully connects can still be further restricted using the other connection control features.

You can use the Connection button to specify which IP addresses your virtual server will or will not talk to. This is particularly useful for multihomed servers because you can bind different virtual servers to each of the IP addresses—and it’s even more valuable if your SMTP server happens to have one interface to the Internet and another to a private local area network (LAN). The Connection dialog box (shown in Figure 8-5) has two primary options: Only The List Below specifies that you want to allow connections from listed hosts and no one else, whereas All Except The List Below means you want to allow anyone except the listed hosts to connect. The Add and Remove buttons allow you to manage the contents of the Computers list. When you click Add, you’ll get the oddly named Computer dialog box (shown in Figure 8-6), from which you can add a single IP address, a range of IP addresses (expressed as an IP address plus a subnet mask), or a DNS domain. Note that turning on connection restrictions by DNS domain requires a reverse DNS lookup for every connection. On busy servers, that can reduce performance significantly. 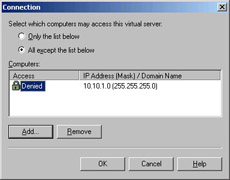 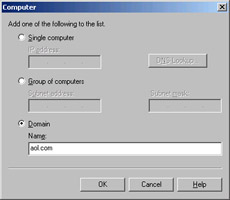 Figure 8-6: Use the Computer dialog box to specify IP addresses, ranges, or DNS domains that you want to block.

Controlling Who Can Relay

The Relay button in the Access tab is what you use to specify which computers can relay through your SMTP server. The relay restrictions control which computers can use the RCPT TO verb with nonlocal recipients. Remember that the routing engine might still send a non-delivery report after the SMTP server accepts it!

The Relay Restrictions dialog box (shown in Figure 8-7) works in much the same manner as the Connection dialog box: you choose whether the list in the Computers dialog box is a list of those who can relay or a list of those who cannot. The Add and Remove buttons allow you to manage the list. Clicking Add displays the same Computer dialog box you saw earlier in Figure 8-6, with exactly the same capabilities. The Allow All Computers Which Successfully Authenticate To Relay check box lets you override the restrictions so that any user who authenticates can relay—a useful feature for mobile SMTP users. 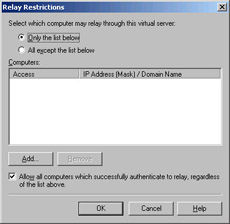 Figure 8-7: The Relay Restrictions dialog box lets you specify who can and who cannot relay through your server.

Figure 8-7 shows the default Relay Restrictions dialog box, which allows relaying only for clients that authenticate, no matter what their IP address is. That behavior results from a combination of three things: the Allow All Computers check box is set, the Only The List Below option is selected, and the Computers list is empty. If you want to completely prevent relaying, you could clear the Allow All Computers check box so that no one would be able to relay. Conversely, if you wanted to allow certain hosts (say, those on an internal private IP network) to relay while preserving authenticated users’ relay privileges, you’d need to add the internal IP range using the Add button.

SMTP connectors are slightly different than SMTP virtual servers. The connector uses the virtual server as a transport mechanism, but it has additional features, including the ability to dequeue mail with ETRN or TURN, the ability to schedule when connections take place, and a facility for blocking messages over a certain size. These features make connectors particularly useful for sites connected over low-bandwidth or metered links. In addition, SMTP connectors allow you to force mail to particular domains through a connector that points to a specified smart host. (For more details of how to set up and configure SMTP connectors, see Microsoft Knowledge Base articles Q319426 and Q319407.)

When you create an SMTP connector, you specify which address spaces it should accept mail for. Unlike the SMTP virtual server, which accepts mail for all address spaces for which a recipient policy exists, the connector is perfectly capable of accepting mail for an external domain and forwarding it, either through the normal MX record process or by delivering it directly to another computer for further processing.

To test whether your machine is open for relaying, the best bet is to check it yourself. Internet relay testing services might actually report you to various spam blacklists if they think you’re an open relay. This threat is worsened by the fact that many poorly written relay testers flag Exchange 2000 as being an open relay even when it’s not. This problem arises for efficiency reasons: if Exchange sees a recipient whose domain isn’t specified (for example, RCPT TO: paulr), it doesn’t immediately reject the message. Instead, it accepts it for delivery so that it can generate an NDR later. This behavior fools some relay checkers that expect to see an immediate 550 5.7.1 Relaying prohibited message, even though Exchange is following RFC 822 and is behaving in an acceptable way. (See Knowledge Base article Q304897 for more information.)

Relay testing is simple if you understand the basics of the SMTP protocol. Each conversation has to specify the sender, the recipient, and the message data, in that order. By using the Windows Telnet client, you can easily pretend to be an SMTP sender who’s trying to relay. (Of course, that’s one of the reasons people turn on authentication and encryption for SMTP sessions: SMTP traffic is trivial to forge.) This testing works only if your SMTP server is set to allow anonymous connections.

Begin by opening a Telnet session on port 25 to your SMTP server, like this:

Your Exchange server responds with a banner. Notice that the banner begins with 220, which means that everything’s fine. Every response you get from the SMTP server has a response code at the beginning. Over time, you’ll learn to recognize them. The banner also tells you the DNS name of the server and the version number of its SMTP service:

Because the server’s last response was a 220, you can now begin your conversation with the HELO verb, followed by the DNS name of your machine:

The SMTP server responds with a 250 message, signaling that it recognizes you:

Now the fun begins: you need to tell the server who you are. Type MAIL FROM: followed by your e-mail address. The server respond with another 250 message, indicating that the sender is okay. Next, you’ll need to specify who the mail is going to, which you do by typing RCPT TO, followed by a nonlocal recipient address:

The server should immediately tell you that relaying is not allowed:

If instead you see the message has been accepted (250 2.1.5 elvis@fabrikam.com in this example), you know your machine might still be capable of relaying. Go back and double-check your relaying configuration to ensure that it’s correct.