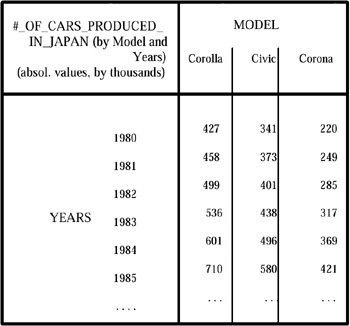 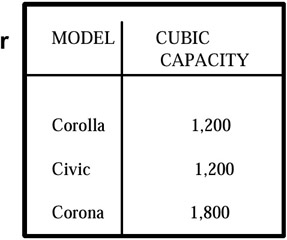 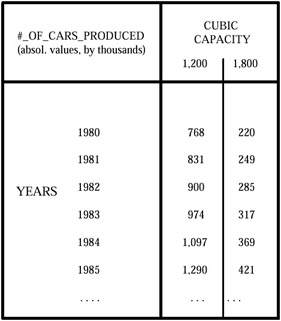 This operator is more powerful than the roll-up operator (discussed in the following), because it allows aggregation only along a defined hierarchy, while the reclassification operator also allows another grouping of the lower level of the hierarchy to be defined ex-novo, giving a grouping relation not defined a priori, but proposed by the user. Generally, it changes the cardinality of the MADs, decreasing them according to a functional dependency defined by the relation mentioned above.

. As already explained, we call this subset an aggregation relation, and denote it by the expression

. Let {A1j} be the set of category attributes which define the descriptive space of the MAD s1. Let

be the six-tuple which defines s1. Let {Ah} be a set of attributes, different from the set of category attributes which form A, such that a functional dependency between a subset

and {Ah} exists. We denote this functional dependency by

. Then, the reclassification of s1 respective to the functional dependency

are the same and

s' is a set of recomputed summary values. This recomputation depends on the type of aggregation function (e.g., count, sum, average) applied to the original microdata.

Obviously, the new MAD s'1 is a more aggregate representation of the fact