This operator was proposed for the first time (and in a simpler form) in Fortunato et al. (1986), and consists of a family of operators. 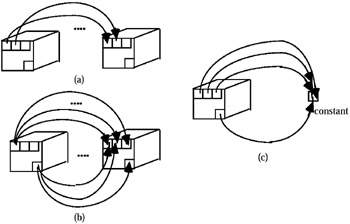 The former compares the MAD in input with another MAD (table), which can be the same, opportunely shifted along a dimension.

The latter compares each measure instance of the MAD in input with a single numeric value. Both these comparisons are performed by a set θ = {>, ≥, <, ≤, =, ≠} of operators.

By this operator we are able to answer queries of the type:

The result of this operation can be of two types: logical (i.e., in every cell of the resulting MAD, one logic value—true or false—appears), or numerical (if the Ø-condition is verified, value = true, the original value remains inside the cell, otherwise the symbol — appears.)