As we have seen earlier in this chapter, geographic databases are characterized by entities or classes which are organized through hierarchies whose common semantics are space inclusion. On the other hand, the model of MDDBs is mainly represented by the structure of its dimensions, hierarchies over dimensions, facts, and measures. MDDBs, besides the phenomenon of interest "what" and the temporal "when," support that of the spatial "where," often among several dimensions. Thus, the location dimension becomes the binding element between GDBs and MDDBs. The task of cooperation is based on two kinds of correspondences:

For a clear description of the above correspondences, we introduce some simple denotations. Let lg be a level of a location dimension whose domain is represented by dom(lg) and let Ig be its own instance. Let gc be a geographic class which belongs to the geographic taxonomy, and let the set of all its instances be represented by Ogc. Then, the above correspondences are achieved by a bijective function λ, where

The function λ, Full-Contains and Complete containment functions play a central role either in linking the heterogeneous environments or in providing data which lack in one environment by knowing data and their relationships in another. The following theorem shows how the location hierarchy of MDDBs can help to complete our partial knowledge about its equivalent hierarchy in GDBs.

Theorem 1: Let gc′ and gc″ be two geographic classes in a GDB such that gc′ Full-Contains gc″. Let l′g and l″g be two geographic levels in an MDDB. If gc′ (gc″) is mapped to l′g (l″g) by the function λ, then the complete containment function from l′g to l″g exists, and it is unique.

Proof. Let go′ and go″ be, respectively, an instance of gc′ and gc″, such that between them the Full-Contains relationship exists. Applying the bijective function λ to these two instances, i.e., λ(go′) = I′g and λ(go″) = I″g, we obtain a generic pair <I′g, I″g>. The relationship between each pair of such geographic levels instances, obtained by λ onto the instances of gc′ Full-Contains gc″, is a total and surjective function, i.e., it has the same properties as the complete containment function.

We prove that the complete containment function is unique and show the contrapositive.

Contrary to the above theorem and following the assumption made before about the equivalency of the geographic hierarchies, in both databases we can calculate the geometry of geographic objects. This is described in the following definition and example:

Definition 10: Let l′g and l″g be two geographic levels between which the complete containment function from l″g to l′g exists. Let gc′ be the geographic class corresponding to the geographic variable l′g by λ. This mapping allows the generation of a geographic class gc″ such that gc″ Full-Contains gc′. The geometric attribute value of any instance of the class gc″ = λ−1(I″g) is obtained by

The schema of a binding attribute is identical to the schema of the cube introduced in the previous section. However, the set of its levels is defined by all the levels of the cube except one, the geographic level, which is kept implicit by being equal to the class name (e.g., MUNICIPALITY). These are called local levels. Note that every binding attribute represents one and only one cube. For a clear description, we give the following example, and then we formalize the above concepts.

Example 10: Figure 3 shows graphically the binding attributes in the schema of the geographic class MUNICIPALITY. 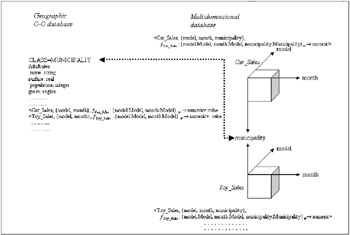 The following definition highlights the fact that the set of attributes in the schema of geographic class is enlarged by new binding attributes corresponding to cubes formed by only one location dimension.

, where Ig represents an instance of a geographic level lg. 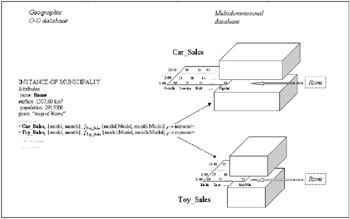 Generally speaking, a cube can be defined with more geographic levels. The next definition describes the binding attributes when the number of geographic levels of the cube under consideration is equal or more than two.

Generally, in the case of cubes with more geographic levels, two different cases are distinguished as follows:

Case 1. There is no hierarchical relationship among the geographic levels of the cube.

Example 12: Let us consider a nationwide shoe company that owns chain stores located in all provinces. We assume that this company delivers monthly to its stores in various provinces a certain number of shoes from its production departments located in provinces. Then, the delivering of items is modeled by the following cube which has the "Province of Production," "Province of Distribution" as the geographic levels, and "month" as one non-geographic level.

As we can see, the above geographic levels are specializations of a single level "Province." In addition, the relative mapping by the function λ−1 will yield two geographic classes with the same name which are sub-classes of the geographic class "PROVINCE."

We note the appearance of the geographic level "Province of distribution" (similarly Province of production) in the local levels of the binding attribute of the class "PROVINCE OF PRODUCTION" (similarly PROVINCE OF DISTRIBUTION).

Case 2. There is a hierarchical relationship among the geographic levels of the cube.

Example 13: Let us consider the same nationwide company of the above example that owns chain stores located in all provinces. This company delivers monthly a certain number of items to its stores from the production department located in various regions. It is represented by the following cube:

The instances of the above geographic classes will assume different semantics. For example, a given instance of the first geographic class represents a region of shoe production in which the items are distributed over several provinces and months, while in the second case an instance represents the province of the distribution of shoes which are made in several regions and months.

In this section, we show the solution of "Query 1" through the approach discussed above. Let us recall the query:

Query 1: "Find all the regions adjacent to the Tuscany region, in which the number of cars sold in 1990, for the <Corolla> product, was greater than 10,000."

The procedure for solving this query is formed by the following steps:

In the extended geographic environment, the above query may be expressed by the following SQL-like expression:

Let us recall that the binding attribute is obtained from the formula as follows:

To summarize, the query is solved through the following steps:

Note that all the geographic operations are performed entirely in the GDB, the results of which are automatically reported in the MDDB in order to apply OLAP operators. Thanks to the equivalence properties between these environments, the so-called OLAP results are indicated as the extended part of the geographic objects involved in the query.