Choosing the Right Reader for Your RFID Network

Hopefully you have the feeling by now that I preach about three primary components to an RFID system:

So why the definitive heading for this section that implies the other two primary components are chopped liver? The reason is simple: the reader (and antennas) and the tags have the biggest impact on the upper performance threshold. The software can only mess things up; it can't make them better. So why then does the reader matter more than the tags? Another good question, grasshopper.

There are four primary reasons that RFID readers are the workhorse of an RFID network:

At this point in the process, you have enough information to determine the proper reader. Your business process analysis will provide details on where the RFID system will collect data. The site survey has armed you with details about the electromagnetic environment and what challenges you need to overcome. Choosing the frequency has given you the information you need to now look at various types of RFID readers. But before you go on to testing and choosing a reader, it might help if you knew a little something about the basics.

Basics of an RFID Reader

You may know a person in their late 70s or early 80s who was in World War II. If you can think about how long that person has been around and what they have seen in their lifetime, you might be surprised to discover that they may have been using RFID during their time in the service. This is especially true for aviators. In WWII the British first innovated the use of RF signals to detect friendly aircraft from "unfriendlies." Because of all the hype and coverage RFID has received, it might seem like a new innovation at the turn of this century, not a 60-year-old technology.

Even though the technology is more than half a century old, it is still very complex and includes a high degree of complex physics. Fortunately, today's reader manufacturers and software vendors have simplified much of that complexity for you, the RF technician. For the CompTIA test you don't need to know all the details of the reader and the intricacies of what happens under the hood. However, having an understanding of what makes up a software-defined radio (SDR) and an application processor back end will help you understand what is happening when you plug an Ethernet cable into the back of a black box. Figure 5.1 shows the basic layout of an RFID reader. 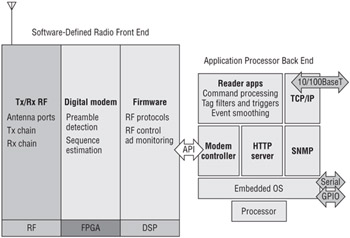 Figure 5.1: Basics of an RFID reader

As you can see from Figure 5.1, an RFID reader is nothing more than a sophisticated radio driven by some software. Keep in mind that even though there are global standards such as those from the ISO for determining what a reader should do, that doesn't necessarily mean they all do it the same. Think of the radio in your car. If you're driving a 1976 Pinto, you might have a $25 AM radio that gets little more than static and the occasional runway clearance when you're near an airport. However, if you're styling in a 2005 Ferrari 360, you're likely to have a several-thousand-dollar system that's thumping not only you, but the whole neighborhood. The difference is the sophistication of the components and the quality of the firmware. RFID readers are the same basic thing under the hood-just as an internal combustion engine is basically the same thing in various cars, yet that Pinto and Ferrari will get much different results from their engines.

There are two key terms that you will hear a lot about in RFID: the field-programmable gate array (FPGA) and the digital signal processor chip, or DSP, which is a specialized chip that performs very fast mathematical calculations). As you can see in Figure 5.1, they are the two other critical components to creating that high-performing reader. The FPGA is a modem that translates the RF into a lot of digital signals. The DSP is a fancy name for a processor that is really good at math.