Now that you have a good understanding of the working environment, it's time to start designing the interrogation zones. The way to design an interrogation zone is to take a perfect RF wave and propagate it around the area where you are proposing to set up your readers. This is done by using the following equipment:

Ever Think You Could Lose a Path?

After you are sure that there is no ambient noise polluting the interrogation zone, you can start to map out what each individual interrogation zone will look like. This process is called RF path loss contour mapping (PLCM). It's pretty much self-explanatory-you are about to map out the RF path where it varies from a perfect RF field. The RF field propagating out of an antenna is shaped like a giant pear, with the stem part going out the back of the antenna and the fat part heading off into space in front of the antenna. The fat part is where the items with RFID tags on them should be moving through. This RF propagation bubble size and shape depends on the type of antenna, and changes dramatically when there is anything in or near the bubble to reflect or absorb the RF waves. The decibel (dB) scale is used to describe RF path loss. In relationship to power, the dB scale is logarithmic and graphically demonstrated in Figure 3.2. Notice the dramatic drop in power for the first few decibels; for every 3 dB reduction in RF power, the signal strength is reduced by half. 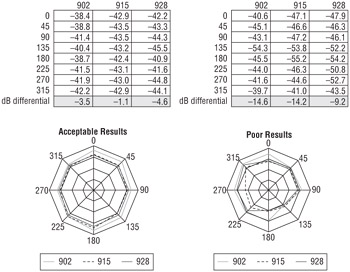 Figure 3.2: An antenna in the middle of a test zone for PLCM

In some instances, large drops in power are discovered over the course of the PLCM processes. Seeing such a dramatic loss in power due to the immediately surrounding environment raises flags for ODIN Technologies' RFID design engineers and contributes to important design decisions including RFID rack placement, reader selection, and reader configuration.

PLCM deliverables include a diagnosis of how effective RFID can be expected to perform in the client's environment as well as guidance for how to configure the reader and antennas postinstallation.

Keep in mind that a 3 dB loss reduces the power level by one half, and it becomes easy to see how the environment can negatively impact the performance of an RFID deployment.

The RF PLCM will allow you to understand how that perfect shape is distorted by what is around the proposed interrogation zone. This information will tell you exactly where you have to place antennas and how much power should be used to create a signal.

The best way to investigate each interrogation zone is to take a look at what happens in the area one step at a time. Although the steps are similar to getting set up, which was discussed earlier in the chapter, the more data points you can find now before you start deploying readers, the better the final results will be. Follow these steps:

The ¼-wave antenna attached to the signal generator is going to pretend to be our tag with a mock signal bouncing back to be read by an antenna. This antenna is where we want to be reading our tags because the box with the tag on it crosses this zone. So think of the tag location as being at the center of a pie, and then dividing the pie into eight slices (the slices would be cut at 0, 45, 90, 135, 180, 225, 270, and 315 degrees). Figure 3.2 shows where the ¼-wave antenna should be positioned in the center of the interrogation zone, and the eight spots around it show the location of the UHF antenna attached to the signal generator. Those eight corners are where we want to test the reaction of a 915 MHz propagation, or how well the RF wave travels back to be heard by the reader's antennas.

For the purposes of this first test, let's assume that you are trying to find out how a dock door and all the equipment around it will affect where you need to put antennas, which direction they will have to face, and how much power each antenna will need. The location could be any potential interrogation zone, from a conveyor belt to a stretch wrap station.

The steps to conduct the test are as follows: 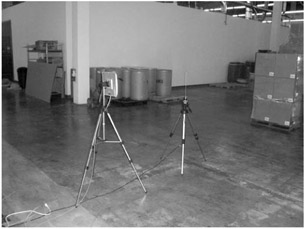 Input the results from your eight-position test into a radar graph in the spreadsheet program. The result should look something like the one on the left shown earlier in Figure 3.2. The result on the left is a perfect RF field in a vacuum. The information you are interested in is how the left and right figures are different.

With the RF PLCM, what you now have is an important tool to design your reader interrogation zone. The ideal zone should be an equal bubble around the center pole (the left graph in Figure 3.2). What you need to compensate for are any areas that may not be equally powerful from that center. In other words, if you look back at the graph on the right in Figure 3.2, you will see that the graph is not an equal symmetrical distance around the center. It is up to the reader configuration to compensate for this loss, but doing a reader setup by using only trial and error would result in a dead spot as tags went through that area of the interrogation zone. The reason there is not as strong a signal is that something is either absorbing or deflecting the signal away from this area. To counteract that loss, the antenna located on that side of the dock door needs to receive additional power compared to power used on the other dock doors, or interfering items such as racks or desks may need to be moved.

The full Faraday cycle analysis and the RF PLCM are the perfect steps for setting up the optimal RFID network architecture. With those two tests completed, you can move on to the next key steps in deploying your RFID network. However, before you rush headlong into bolting down a reader and booting it up, you should plan for the installation, including adding your RFID racks and location onto your site plan. This can be done on the engineering drawings and also in a summary site survey report given to the client.

There are many mounting options from which you can choose for the interrogation zones, but keep in mind that you want a rack or cabinet that allows you to point the antennas without having to move the rack around and also protects your equipment from environmental issues such as dust or impact. Figure 3.4 shows the ODIN Technologies double RFID rack that can have antennas mounted on both sides and angling toward different dock doors. 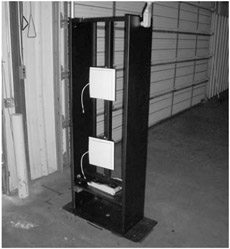 Figure 3.4: An ODIN Technologies RFID double rack with covers removed to see the inside