Replication is the process of automatically distributing copies of data and database objects among SQL Server instances, and keeping the distributed information synchronized.

There are many reasons to replicate data and stored procedures among servers. These include

The Snapshot Agent, Distribution Agent, and Merge Agent can be embedded into applications using ActiveX controls.

Understanding the Types of Replication 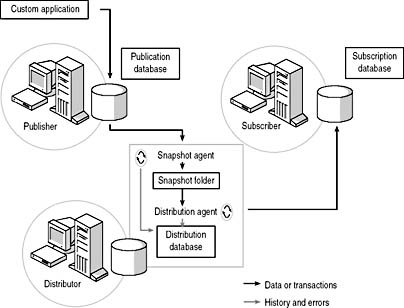 Snapshot replication is most appropriate for data that does not change rapidly, for small publications that can be refreshed in their entirety without overwhelming the network, and for information that does not need to be completely current all the time (such as historical sales information).

With snapshot replication, you can elect to permit Subscribers to update replicated information using the Immediate Updating and/or Queued Updating options. These Updatable Subscription options are useful for occasional changes by Subscribers. If changes are frequent, use merge replication instead. Also, with the Updatable Subscription options, updates are part of a transaction. This means that the entire update either propagates or is rolled back if a conflict occurs. With merge replication, conflicts are resolved on a row-by-row basis.

If the Queued Updating option is used, changes made by a Subscriber are placed in a queue and periodically updated to the Publisher. Modifications can be made without an active network connection to the Publisher. The queued changes are applied at the Publisher when network connectivity is restored. Either the queue can be in a SQL Server database, or you can elect to use Microsoft Message Queuing if you are running Windows 2000. See "Queued Updating Components" in Books Online for more information on installing and using Microsoft Message Queuing. Because updates do not happen in real time, conflicts can occur if another Subscriber or the Publisher has changed the same data. Conflicts are resolved using a conflict resolution policy defined when the publication is created.

If you enable both options, Queued Updating functions as a failover in case Immediate Updating fails (such as due to a network failure). This is useful if the Publisher and updating Subscribers are normally connected, but you want to ensure that Subscribers can make updates in the event that network connectivity is lost.

With transactional replication, the Snapshot Agent copies an initial snapshot of data marked for replication and copies it from the Publisher to a snapshot folder on the Distributor. The Distribution Agent applies this initial snapshot to each Subscriber. The Log Reader Agent monitors changes to data marked for replication and captures each transaction log change into the distribution database on the Distributor. The Distribution Agent applies each change to each Subscriber in the original order of execution. If a stored procedure is used to update a large number of rows, the stored procedure can be replicated rather than each modified row. All three of these replication agents record history and error information to the distribution database. Figure 15.2 illustrates the transactional replication process. 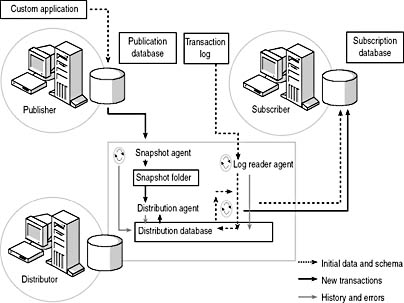 Transactional replication can also be configured to support Updatable Subscriptions using the Immediate Updating and/or Queued Updating options discussed in the preceding section for snapshot replication.

With merge replication, the Snapshot Agent copies an initial snapshot of data marked for replication from the Publisher to a snapshot folder on the Distributor. The Merge Agent applies this initial snapshot to each Subscriber. The Merge Agent also monitors and merges changes to replicated data occurring at the Publisher and at each Subscriber. If a merged change results in a conflict at the Publisher, the Merge Agent resolves the conflict using a resolution method specified by the administrator. You can choose among a variety of conflict resolvers or create a custom resolver. Both agents record history and error information to the distribution database (this is the only function of the distribution database with merge replication). Figure 15.3 illustrates the merge replication process.

The Merge Agent relies on a unique column existing for each row in a table that is being replicated in order to identify the row across multiple copies of the table on multiple servers and to track conflicts between rows. If a unique column does not exist, the Snapshot Agent adds one when the publication is created. The Snapshot Agent also creates triggers on the Publisher when the publication is created. These triggers monitor replicated rows and record changes in merge system tables. The Merge Agent creates identical triggers on each Subscriber when the initial snapshot is applied. 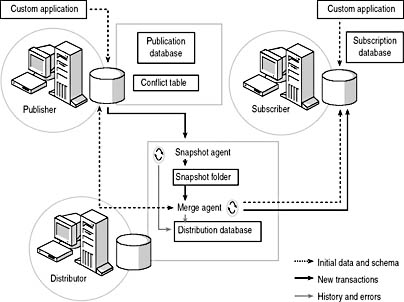 The Merge Agent can be scheduled to run continuously for minimum latency between the Publisher and Subscribers, or can be set to run on a specified schedule. Subscribers with a network connection to the Publisher can receive changes in near real time. If a Subscriber does not receive replicated transactions before the expiration of a specified retention period (14 days by default), the subscription is deactivated. A deactivated subscription can be reactivated and a new snapshot applied to bring the Subscriber current.

With merge replication, a central Subscriber is frequently used to merge information from multiple regional Publishers to a central location. This model requires horizontal partitioning of data to avoid conflicts and generally uses a column to identify regional data. This central Subscriber model can also be used with snapshot and transactional replication. In addition, because merge replication makes limited use of the distribution database, the Publisher and the Distributor frequently reside on the same computer.

In addition, you can implement, monitor, and administer replication using a number of other methods.