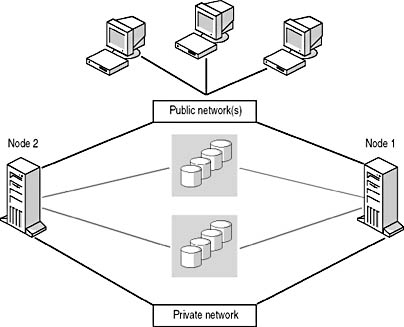 Installing and administering a server cluster on Windows 2000 or Windows NT 4.0 is beyond the scope of this book.

Creating a Virtual Server on a Server Cluster

One or more secondary nodes in the server cluster function as the failover nodes, ready to pick up the load of the primary node in the event of failure.

A node in a server cluster can be either active or passive. You can create up to 16 instances of SQL Server 2000 in a server cluster. Each instance can run on any node in the server cluster. You must plan to have sufficient hardware resources (memory and processor) in each failover node to provide services in the event a primary node fails. There are several ways to accomplish this.

There are a number of installation and configuration considerations you must be aware of when running SQL Server 2000 in a clustered environment.

Failover clustering provides the highest level of availability for SQL Server 2000 installations. Failover clustering is based on MSCS and is available only on Windows 2000 Data Center, Windows 2000 Advanced Server, and Windows NT 4.0 Enterprise Edition. When the SQL Server Setup program detects a server cluster, you can choose to install a virtual server, selecting one of the nodes in the server cluster as the primary node. If this node fails, the virtual server will automatically fail over to a secondary node. The secondary node can either be inactive or function as the primary node for another virtual server.